The Choice of the Hijab

I was actually surprised at the trepidation I felt. I stood at home in front of my bathroom mirror, trying to figure out what to do with my hair. I suspect like many women I have a complicated relationship with my hair. But yesterday the relationship was less complicated, because my hair wouldn't be in view for long. You see, it was going undercover for the day, as I had decided to don the hijab in honour of World Hijab Day.

I will be very frank. I have given the hijab little thought, because to me it was never something to think about. It wasn't until the surfacing of Bill 60 in Quebec, a proposal to force civil servants to remove any garb deemed religious while at work, that I began to think about the hijab. One of my dear friends wears it, as does one of the Intrepid Junior Blogger's best pals. And so I began to think, and learn, about the hijab.

I believe one of the biggest misconceptions about the hijab is that all women are forced to wear it and that none choose to do so. I find this deeply offensive, as I personally know several women - strong, opinionated, educated women - who have chosen to wear the hijab. They have not been forced to do so (and the idea that anyone could force some of these women to do anything is not only deeply patronizing but laughable). I think one of the things we need to understand is that others may choose things we ourselves would not choose - and then we must work to accept their choice and their right to choose. I recall well my younger days when I was having a discussion with a friend about beauty pageants, and about how I could not understand the choice of the participants. I suppose I implied that perhaps these women were not too clever to be involved in such superficial shenanigans, and my friend stopped me and asked me what gave me the right to judge their choice. Why would I demean their choice simply because it was not something I would do? Wasn't that patronizing attitude actually more harmful to them than any pageant could ever be? And she was right, of course, and it forever changed how I thought about choices and how to respect those who chose differently than I.

And so over the years I never thought much about the hijab, until my dear friend Kiran told me about the upcoming World Hijab Day. I knew I wanted to participate, and she and her organizing committee had arranged an event at the local mall so local women could try on the hijab and experience it themselves. I contacted her and said I didn't want to just try it on, though - I wanted to wear it for a day.

That's how I ended up at the mall yesterday, in the capable hands of a lovely young lady who wrapped the hijab around my head. I had chosen the scarf myself, black with silver glitter (I can't help it, I'm like a crow with shiny things), and I watched as her hands carefully swept my hair into the scarf and out of view.

I don't quite know how to explain how I felt. I suppose I had also never really considered how much of my identity is tied up in that red mane of mine. I was almost afraid to look in the mirror, but after taking some photos they took me over the mirror, and smiled while I looked at myself.

I looked like me, in a hijab. It was a bit of a startling contrast even for me, my very pale white skin against the black hijab. The ladies were so lovely, though, so kind with their compliments, and the very first thing I noticed as I glanced around the hijab-wearing crowd was that I felt something very interesting - I felt kinship, almost a sisterhood with these women who smiled and nodded at me. It was like I had entered some sort of club, and they welcomed me in. But the tough part, the interesting part, lay ahead, as the hijab and I went about our day.

I noticed it almost immediately as I walked through the mall. People stared at me, first at the hijab and my face, and I suspect it was because I was not what they expected to see. I am quite obviously a Caucasian woman, and I think the colour of my skin was not what they expected. I felt conspicuous, and I was unsure if it was actual or just perceived until a friend confirmed that I was undoubtedly attracting stares of confusion.

I went to my first stop, a shoe store I know well, and what happened next was very unexpected. The manager, who recognized me, told me I looked beautiful, and then we began to discuss why I was wearing the hijab. Within minutes all the staff at the store were engaged in the discussion, talking about Bill 60 and freedom of choice and freedom of expression. It was a multicultural little group too, a microcosm of the diversity in our community, and their interest and support showed me immediately that this had been a very good idea. It was sparking dialogue, and it was allowing us to talk about issues we rarely discuss - things like religious freedom and discrimination.

I attended the brief speeches the organizers had arranged for World Hijab Day, and then I left the mall, going to a place that only seemed natural to visit if I wanted to gauge reactions. I went to Wal-Mart.

As I wandered the aisles I saw continued confusion and puzzlement over my new hijab. Most people were far too polite to ask, although one sweet little girl told me I had a very pretty scarf. I could see, though, that they were wondering, perhaps because I do not fit the "look" we have come to expect of those wearing the hijab. But I wondered too if other hijab-wearing women experience those stares, and if this was related to the hijab itself and not the shade of my skin. I suppose I will never know, really.

I sailed through the rest of my day, stops at Starbucks and the pet food store and Safeway. I noticed the hijab kept my head warm despite the cool temperatures, and I noticed that as the day wore on I felt less strange about it. And I found myself thinking about the three words those at the event had emphasized: honour, modesty, and beauty.

The beauty part was easy to understand, as when you cannot see someone's hair I noticed how you focused on their eyes. Suddenly the eyes in that face become everything, and you notice the beauty of those eyes, the shape of the face, the expressive crinkle of the lips as they speak.

The honour part was easy to get too, as wearing a hijab to honour one's beliefs is no different than those who wear a cross to honour their Christianity. It is a symbol of belief, and a part of identity. In the same way that my hair is so much a part of my identity so too must be the hijab for those who choose to wear it - and who am I to question that choice or to assume that I know better or understand more? Who am I to patronize those who have made a choice I may not have made?

And I began to understand the modesty part, too. You see, most women don't wear their lingerie on the outside. They may wear absolutely lovely undergarments, but those items are not displayed but rather reserved for themselves and for those they choose to share them with in intimate settings. And if some feel that way about their undergarments why should we assume some will not feel that way about their hair? If they want to preserve their hair for those closest to them then who am I to tell them they must expose it, any more than I would demand a woman expose her lingerie? Shouldn't we all have the choice to determine what we will and will not make available for the world to view?

By the time I got home I was quite used to my hijab. I walked in the door, and to my mirror. I began to unwind it slowly, removing the pin the young woman had so carefully placed in my hair. I tried to memorize how it was wrapped, so that I could replicate it some day if I wished to. I thought about all my other scarves, considering which ones could be used as a hijab if I chose to, and what events I could choose to wear one to if it seemed fit - and there was that word. Choice. I was thinking about it as a choice, not a requirement, in the same way my friends have assured me they made the choice to wear the hijab. I do not know if I will choose to wear the hijab again, but I feel deeply grateful that in this country I have that choice. I could decide tomorrow to wear the hijab every day, and no one would have any right to tell me my choice is wrong or demand I remove it. I could choose to do it for whatever reason. And it is my choice, which is a beautiful, beautiful thing.

I hung the new scarf up with my other scarves late last night. I will wear it again some day, of that I am certain. Will I wear it around my neck, or around my head? I don't know yet. That choice has yet to be made, but I am so happy to have the opportunity to make that choice.


My thanks to the local organizing committee for
World Hijab Day -
what an amazing event you managed to create
bringing the concepts of
modesty, beauty, and honour
to our community! 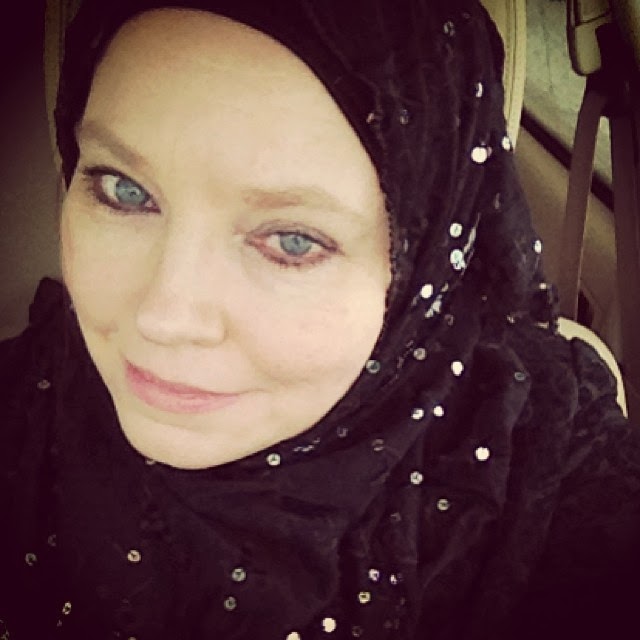