When it was first suggested I laughed. And then when it was brought up once more I laughed again. And then it began to dawn on me that they were entirely serious, and that this was a commitment I needed to consider. The suggestion? That I be a celebrity dancer in Dancing With the Stars Wood Buffalo 2014.

Let's be clear here. I am not a dancer. I am the person who can fall going upstairs, and I have a deep wariness of escalators as those things and I go way back due to my lack of grace. Oh, I spent most of my twenties hanging around with musicians and in night clubs in Toronto, but I was never really known for my dancing prowess or abilities (back then all I was known for was my laugh and an ability to chug back an impressive amount of Black Label beer given my rather small size).

So when the good folks at the Fort McMurray SPCA began to hint around that they might like me to serve as a celebrity dancer I was hesitant, because I while I am quite willing to put myself out there I am a bit shy about my lack of grace and charm on the dance floor. There is a time commitment, and then there is my poor partner, who will soon learn that I have two decidedly left feet and a total lack of rhythm. But I knew I had to say yes. And this is why: 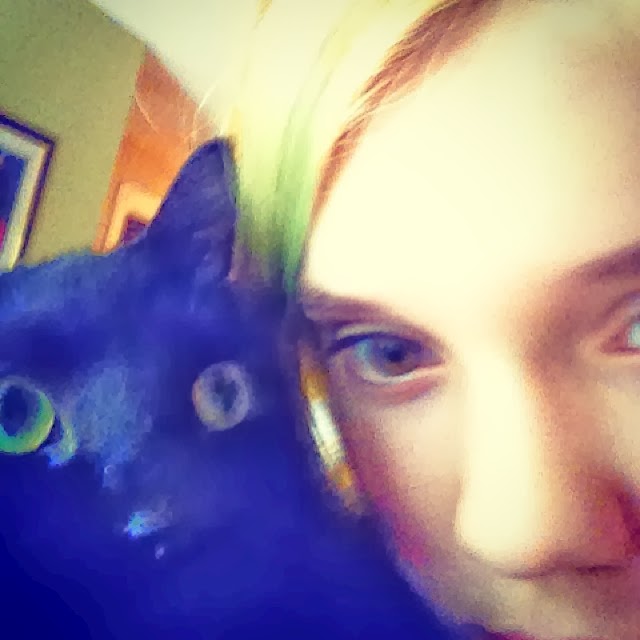 These are the kinds of text messages I get when I am at work. That is the Intrepid Junior Blogger, of course, and those two green eyes belong to Sirius Black Cat, who first set paw in our house in September and rapidly took over. It would not be a stretch to say that Sir Black has managed to become the focal point of the house, as we have all fallen in love with him, including the family dog. It's hard not to love a plush black creature who purrs when he sees you, pounces on you when you turn a corner, gets stuck in the fridge when you turn your back and close the door not realizing he is inside until you hear the meowing, and otherwise prances around like he owns the joint (because he does). And little Sir Black Plush Cat came to us from the SPCA.

He was a stray, you see, a street kitty with a shady past. You can tell at times he remembers life on the street, and like many former strays he cannot get enough food in his belly (thus his alarming increase in stomach pouchiness since adoption). We found him in the SPCA cat room when he climbed into the IJB's lap, laid down, and began purring.

And Sir isn't our only SPCA pet, either. One of our ferrets, little Riversong, came to us from the SPCA as well. She joined our other two, making a little trio of mayhem that only ferrets in a group can make.

So when it became clear the SPCA wanted me to dance I knew I needed to do three things: clear my calendar, find some dancing shoes, and put aside my fears, because this was all about raising funds for an organization that has touched my life, and the life of the IJB. I am so profoundly grateful to them for all the work they do, but especially for bringing Riversong and Sirius Black into our lives.

For the next few weeks I will be blogging, tweeting, and Facebooking about this journey. You can expect complaints about sore knees (I am old, you know), being woefully out of shape, and expressions of abject terror about dancing on a stage in front of a crowd (just contemplating it makes me feel the need for Valium). You can also expect me to be harassing you to vote for my partner and I. Every vote costs you $20, and frankly I am pretty bloody competitive and I play to win, so you can expect requests and pleas to vote and donate, and then to attend the big event on April 26th.

Every dance step of the way I will be thinking about the SPCA, and Riversong, and Sirius Black, but even more about the IJB and what this little ferret and cat mean to her. You see she loves animals in the same way her mother does, and having Sir Black has changed her life, I think. Last week she came to me and said "I don't really remember what life was like before he was here, can you imagine life without him?" as she cradled a lazy, plush, sleepy and bleary-eyed black cat in her arms. And the answer is no, I cannot imagine life without him, which is why when the SPCA said "come dancing", I did.