Recently someone asked me why social media is so strong in Fort McMurray. They had noted, correctly I think, that our Facebook and Twitter scene is hotly active, and far more so than in some cities. When they asked the question I replied very instinctively, and even I had to stop and think about whether or not that instinctive reaction was correct - but after consideration I think it is. You see, I told them we have such active social media because we don't have a dedicated local television station that broadcasts the news.

I suppose it is with a sense of surprise on occasion that I remember we don't have a local TV station. And I don't mean to diminish what Shaw TV does, as their community-focused segments are terrific and of tremendous value, and our radio stations do an excellent job, too - but I don't think there is anything quite like the 6 o'clock television news to inform and communicate, and that is something we simply don't have here. We rely heavily on radio and newspapers, and more and more on social media, to connect and communicate. We don't have morning shows or the noon news hour or the 6 pm news, things that were all a standard daily staple in my house when I was growing up. Those shows were how news, traffic issues, weather, and sports were communicated. There were investigative reports, and feel-good stories. They were part of daily life, and we don't have them here in the same way - but we do have that innate desire to connect, and so we turn to social media.

I will be very candid here - I love social media and all its facets, but it has some serious pitfalls. Social media and the information on it often answers to no one, and accuracy can be suspect. You can find rumours presented as fact, and facts dismissed as rumours. The concept of "citizen journalism" is a fascinating addition to our world, but it should not replace traditional journalism, with proper fact checking, sourcing, and accountability. And social media has repercussions, too.

In the last election I followed social media with interest, and not just from our own community and our regional election. I don't believe you can actually win an election through social media use, although I think a strong social media presence is of benefit. I do think, though, that you can lose an election through social media, as in some other cities I witnessed candidates arguing with the very voters they hoped to attract and pursuing similar strategies that seemed unwise at best. Social media has strength in elections, and it should not be diminished, but it also cannot replace human interaction, like traditional door knocking and engagement with voters. There is much social media can do - and yet there is much it cannot do, and maybe that it shouldn't do.

And then there is the age divide, too. The Intrepid Junior Blogger is active on Twitter, having several accounts burning with activity from local commentary on events to usage for online role playing games based on some of her beloved video games, like Skyrim (and even a Twitter account for her cat). She has a Facebook page, too, but she rarely uses it, and informed me the other day that Facebook is for "old people".

Yep, old people. She suggested that Facebook is becoming MySpace, a social media platform abandoned when young adults moved on to Facebook. She told me that old people ruin social media, turning it into some systematic, structured thing to share recipes and send game requests as opposed to the free-flow of information young adults prefer. She said that her entourage is more into instant messaging, like Kik and Snapchat, and that in her world even email is dying as kids text instead of email (and she seems to be right as she rarely emails, either). But maybe that is why adults in Fort McMurray flock to Facebook groups and Twitter accounts - maybe it's because we find ourselves lacking in the traditional ways we connected via daily television news and morning shows, and we have created a new paradigm instead and taken over the territory of our youth.

I enjoy social media immensely, but on occasion I worry about the power we ascribe to it, and the effort we invest in it. I worry that this investment is a poor one at times, better spent with live human interaction and face-to-face conversation. And as witnessed by the way some panicked when Facebook went down last week (causing the IJB to laugh at the reliance of "old people" on it) I think we saw some of the issue of giving too much power and attention to social media. I think it is worrisome that people think that a website going down will have disastrous effects on their networking abilities and their interactions, because Facebook is a relatively new invention, and such solid reliance on it is concerning (apparently serious terrorists just need to knock out social media to achieve chaos). I have heard social media described in so many ways - a tool, a toy, a weapon. And it is a wonderful thing, and one I have embraced - but on occasion my relationship with it is an uneasy one as I see both the good it can do, and the damage it has done.

Would I give up Facebook and Twitter if a local TV station came along and started broadcasting the news and carrying local advertising and covering local stories? No, of course not - but I do think that my own reliance on it would wane a bit as I would feel that desired connection from another glowing screen. I suspect the IJB would definitely dismiss TV news as being for "old people" - but I also know that she would be sitting on the sofa right beside me as we watched the news together, with dialogues sparked by what we saw on that screen as opposed to both of us on laptops immersed in our own little social media worlds. Andy maybe that's where the true connection is missing, and why I feel this nostalgia for the nightly news shared by those gathered around a TV set - because maybe it is the human interaction that social media is truly lacking. 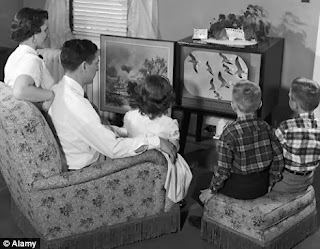