I have had experience with exactly two education systems in my life. My entire education was spent in classrooms in Saskatoon (with one short year, Grade One, in a tiny town called Reward, where the year after I left they closed the school – I like to believe there is no connection), and the Intrepid Junior Blogger has spent her entire school life in the Fort McMurray Public School District. She started in kindergarten at Beacon Hill Public School, where I drove her to school every day because our neighbourhood did not bus there but we knew it was the right school for her. When we moved across the bridge she spent a year at Timberlea Public School, and she was thus one of the first students to cross the threshold of the newly opened Ecole McTavish, the junior high she now attends. In Grade Nine now she will be part of the first cohort to have spent all their junior high years in this school, a fact of which she is deeply proud. Last night I attended the awards ceremony for last year, and I while I sat in the crowded gymnasium I found myself again reflecting on schools, the IJB, and Fort McMurray.


Last night when we arrived the gym had already begun to fill. Very quickly empty seats were a rarity, and soon additional chairs were being added simply due to the sheer numbers of parents arriving. What I noted with pleasure was the incredible cultural diversity in the IJB’s school, an experience I did not have when I was in school. One of the IJB’s best friends wears the hijab (as does one of mine, incidentally), and simply through her friends she is learning about other cultures, cuisines, and beliefs. And the other thing I noticed was how many students were there to collect their awards – it seemed like hundreds of them, and it was. Last night over 200 students achieved honours or honours with distinction, as well as other awards for classes like foods, French, and other optional courses. And I found it astonishing, because those 200 kids represent a pretty huge portion of the school population.
I don’t know about you, but I think we have something pretty incredible going on with our schools in this community. Every school the IJB has attended has been not just a “school”, but a community. For several years I served on parent council, and I had the honour of meeting so many educators with clear passion for what they do, and they continue to impress me on a yearly basis. These are teachers and administrators who truly want to see students succeed, and they encourage them every step of the way. It doesn’t end in the classroom though as these educators give freely of their personal time for drama productions, sports activities, and more. They aren’t in the business of creating students – they are in the business of creating citizens.


While the IJB has been in school I have seen teachers start social justice programs, and clubs based on very specific student interests. I have seen the rise of a local hip hop group that came from one of the IJB’s teachers and his friends, and I have seen students, under the guidance of the teachers, explore so many interests and ideas. And what I thought about last night is how this is shaping not just the students, but the leaders of tomorrow.
As I saw students be called up one by one to receive awards or honour roll designations I realized I was watching our future doctors, engineers, politicians, chefs, dancers, artists, and teachers. Yes, in that crowd of over 200 students will be some who may well pursue a career in education, and they will do that after having been mentored by educators who have shown them what education can really be. They will follow their career paths, whatever they might be, inspired by teachers who have shown them the way, leading by example.


I will admit it. Last night, in an overcrowded school gymnasium, I got goose bumps as I saw a parade of students walk up the aisle to accept their awards. In my mind’s eye, though, I didn’t see students. I saw the future – and thanks to those who work in our education system in Fort McMurray the future looks bright indeed. 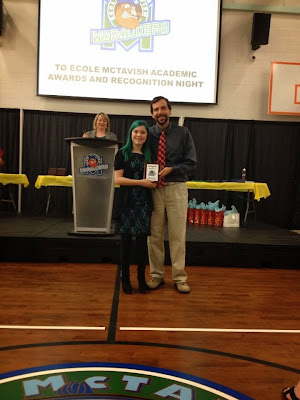 Intrepid Junior Blogger and her principal
Honours with Distinction
at October 03, 2013