Hung Out to Dry in Fort McMurray 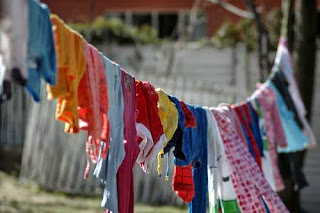 I forgive you if you read the title and thought this was a post about politics. After all, tomorrow is the municipal election, and it seems certain some political hopes and dreams (and politicians) may well be hung out to dry by voters - but this post is not about politics, or politicians, or even hopes and dreams. Nope, as mundane as it might seem, this post is about laundry.

One of the things I have is a fairly large wardrobe. I like fashion, which means I like shoes, and dresses, and blazers and...well, you get the idea. One of the things I don't like is dry cleaners, both due to the expense and inconvenience, and years ago I discovered that most items of clothing that say they need to be dry cleaned can be washed, if done carefully, and kept away from the evil dryer. Now, not all items can be washed and some still end up with the dry cleaner, but once I had figured out what can be washed (and that the true enemy to clothing isn't the washing machine but the dryer) I began to save big on dry cleaning bills as I would wash my clothes and then hang them to dry indoors in laundry rooms and bathrooms,  as I often lived in apartments without access to the outdoors.

This worked well for many years, including in my previous home, but I noticed when I moved to this new smaller place that hanging things to dry in the bathroom, as I had always done, wasn't going so well. This new house holds humidity like a trap, creating a sauna atmosphere when things are hung to dry, as I so like to do with my nice dresses and shirts. The humidity level in the house was skyrocketing, and high humidity means issues like mold, and mildew, and smells. One morning I was pondering this while hanging a load of dark items, and I happened to look outside and see my gazebo, stripped of the usual summer netting to ready it for the winter. And that is when it hit me, and I felt like such a fool. Why wasn't I just hanging my clothes outdoors?

I grew up with a mother who had a clothesline. Now, for her it was plain frugality, as she had grown up during the depression and for many years hadn't even owned a clothes dryer (in fact she spent many years raising 5 children without running water, and hand washing all their clothes and cloth diapers with well water - I can't even quite wrap my head around that, to be honest - she was a saint is all I can figure). She hung everything to dry, even in the stark cold of Saskatchewan winters. I remember some days she would bring in sheets that were frozen solid, one big chunk of fabric stiff from the freezing cold - and then she would toss them in the dryer for a few minutes and out they would come, soft and dry. The dry outdoors air, you see, would suck the humidity right out of the sheets even as it froze them solid. And there was something else about the way she dried clothing outdoors. It was the smell.

Do you know that smell you detect right before or after it rains? That impossible to describe but so distinctive odour? It's called "petrichor" and while that seems an unpleasant name when you know the history behind it the name takes on more significance. The word is Greek, coming from petros, meaning stone, and ichor, the fluid that flows in the veins of the gods in Greek mythology. The Intrepid Junior Blogger introduced me to that name, and now whenever it rains I think of that word, and that smell that is so associated with rain and earth. I don't know if there is a name for the smell that you can detect on laundry that dries outdoors, but I know that odour exists, because I can smell it in my memory, from times when I would bury my nose in those sheets dried outdoors. For me it is the smell of the outdoors, and home, and my mother.

So, that day a week or so ago when I looked at the gazebo and looked at my load of heavy wet clothing I had an idea. I took those items and hung them on hangers, and then I hung them out on my gazebo for the day. My gazebo, well hidden from the neighbours, became a clothesline, and later that day I took them down, perfectly dry after a day outdoors, and buried my nose in them - and there was that smell, an odour that took me back to my childhood and simpler days.

I went on a search then, to learn more about clotheslines and bylaws and rules. Some cities ban clotheslines, considering them unsightly, but it appears there are no such bylaws here in Fort McMurray (although some apartment buildings and condo associations may have specific rules regarding them). I looked into clothesline designs and ideas, and I looked at the savings they generate, from lessening my reliance on energy-sucking dryers and saving on electricity bills. And I thought about how such a simple act is actually good for the environment, taking advantage of the outdoor breezes and dropping humidity levels. But I will be honest - it was the smell that really got to me, the smell of clothing dried outdoors and hanging in my closet, fresh, and clean, and dry. That's when I decided it, really.

While my gazebo shell has made a lovely impromptu clothesline next year I will construct the real deal in my yard. And no fear, neighbours, I will continue to hang my lingerie indoors to dry, but some of those other items, my dresses and sweaters and shirts, will be in my backyard flapping gently in the breeze. Many things will be hung out to dry in Fort McMurray in the coming months, at least in my little yard, and I couldn't be happier about it. And as for the election tomorrow? There will be some hanging out to dry, almost certainly - but that is for another blog post, I think.
at October 20, 2013