If You Go Into the Woods Today You're in For a Big Surprise...Girls Inc. of Northern AB Zombie Run 2013

When I covered the event last year as media I knew that if it became an annual event I had to get involved. Since I’m not a runner it meant attending the event as a volunteer, and since the Intrepid Junior Blogger has expressed an interest in doing more volunteerism it meant bringing her along for the adventure – and so when I saw the ads asking for volunteers for the Second Annual Zombie Run in support of Girls Inc. of Northern Alberta I rushed to sign the IJB and myself up. We didn’t sign up to check in runners, though, or do make-up – we signed up to be zombies. 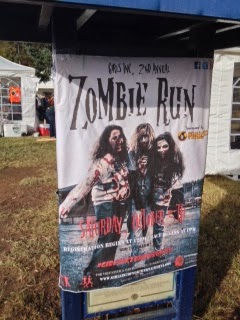 There is something about living with a teenage kid that makes you feel both very, very ancient and yet somehow make you feel young again, too. I suppose this is why volunteering to be a zombie was so appealing to me, because it is a chance to just be playful and have fun – which is how we found ourselves wandering around Spirit Halloween for hours on Friday night, stocking up on spirit gum and fake injuries and spray blood.


Spirit Halloween, incidentally, is a great place for costumes and Halloween decor, and the perfect place to find zombie gear. The helpful staff ensured we had all we needed to get zombified, and so Saturday morning I got up and put on my face, which I do most mornings but usually to achieve a different effect.
Layers of grey pancake make-up, blackened around the eyes, unwashed teased up and sprayed hair , and a fake gash in my neck led eventually to this (not all that much different from my typical Monday morning look, really): 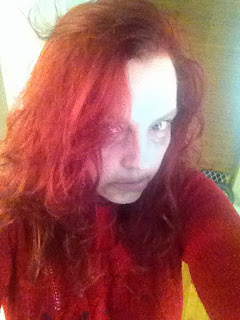 And to complete the effect I bit into a blood capsule, which I will never do again as my tongue instantly went black, my teeth were an appalling shade of grey, and the taste was beyond the worst thing I could ever imagine licking (if that is what the inside of the undead mouth tastes like no wonder they are such irritable creatures all the time). Once my make-up was done we started on the IJB, applying wounds and grey make-up and blackened eyes (she wisely declined the blood capsule). Then outside we went, to spray ourselves liberally with blood spray (which left my patio looking like the slaughtered chickens there recently, and I am relieved it rained on Sunday as I was a bit worried about what my mailman was going to think). 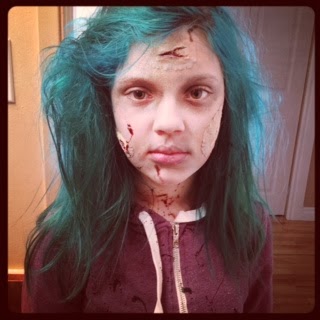 And this is what it took to create two zombies (note the coffee cup, without it the real zombie appears in me): 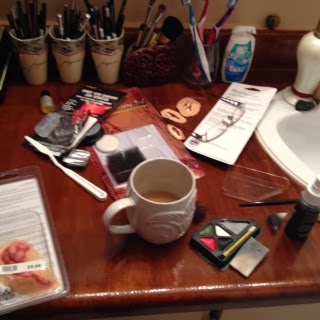 And so, make-up and hair done, we climbed into the car and drove to...Starbucks at the Thickwood Safeway, because we needed coffee and a treat, and we wanted to see the reactions. 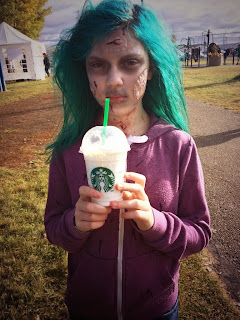 We were both deeply amused that the new young employee at the register didn’t even blink twice at serving two zombies, and while it was clear everyone who saw us had some serious questions you could see them fighting the urge to ask them. We finally told a few people we were volunteer zombies, and why, and were delighted to find one of the other customers was registered as a runner in the event, too. 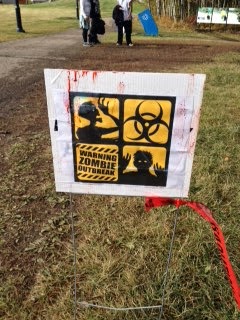 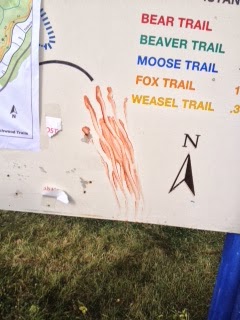 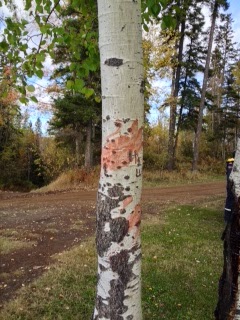 We arrived at Birchwood Trails with our coffee cups in hand, ready to zombie, and were delighted to find ourselves surrounded by a virtual horde of zombies, friendly enough to chat with but not ones I would want to encounter while innocently walking my dog on the trails on a cool fall day (and incidentally this did happen, on several occasions, when people who had no idea what was going on wandered down the trails and found zombies lurching on the paths – I can only imagine what ran through their heads initially, and I fear some timid dogs have been traumatized for life). 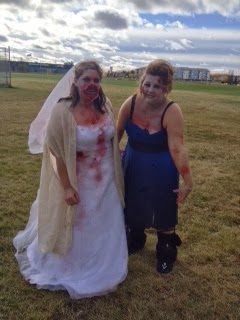 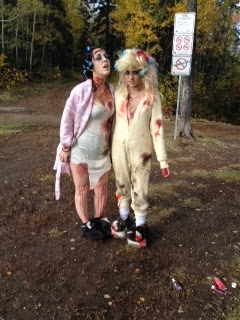 We received our zombie training and then we scattered into the trails, ready to await the runners who would wear small flags around their belts, flags that we needed to try to grab to signal a successful “kill”. The IJB and I chose to head to the end of the course, in retrospect a strategic error as by the time the exhausted runners reached us most had already been stripped of all their flags. Flags or not we gave our best zombie impression, the IJB being much more frightening than I (especially when she would appear lurching from behind the blind corner, confronting runners twice her size who would stop, see her, and then look past her to see a horde of about ten zombies waiting for them). The IJB was deeply pleased when a group of high school boys, zombies from further up the course but heading back to base, watched her with horror and deemed her the most terrifying zombie (one young man looked at me and said, rather succinctly, “If I was a runner and saw her I would crap my pants”). 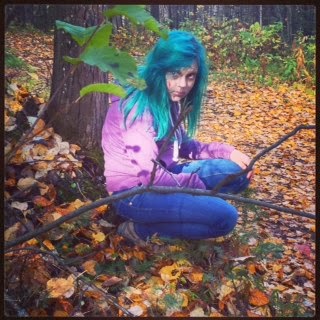 In the end, though, we secured no flags between the two of us, but we spent a lot of time with our fellow zombies and shared some laughs and stories. We spent a few great hours on the trail (me with my neck a bit raw and red from the fake throat wound, which I kept scratching at as apparently I am mildly allergic to spirit gum adhesive), and best of all we spent it together, my horrifyingly freakish little Intrepid Junior Zombie and I.


This second year of the zombie run was without a doubt an overwhelming success. After the initial year I think many people realized that this kind of fundraising event was a whole lot about the “fun” part of “fun”draising, and that the money collected goes to a stellar cause (and one near and dear to me, as Girls Inc. was integral to some young women of whom I am very fond, ones who have moved on to another city but who for a time found strength, community, and support through the Girls Inc. program), and so they were eager to get involved. The IJB (IJZ?) and I will be back again next year, no doubt (this time using latex to adhere our wounds, and with better, badder, and meaner make-up than ever). It was an amazing way to spend the day, and on our way home the IJB sat pulling off her fake scars, and rubbing grey make-up off her face. “Great day, mom”, she said. “Great day”.  And so it was, yet another great day in this incredible community participating in an event that combined fun and fundraising with community and zombies. 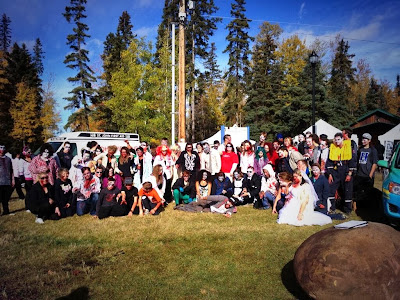 Photo credit to Steve Reeve of Mix 103.7
Huge thanks to
Spirit Halloween
for the assistance and zombie supplies,
our fellow zombies,
all the participating volunteers and runners,
and
Girls Inc. of Northern AB
for all they do every day,
and congrats on a very successful
second annual Zombie Run!
at October 07, 2013