Lift Off to Africa

Early this morning, as the sun was rising and most of us were getting ready for our usual Wednesday, a young man in our community and his father set out on their day, too - but it isn't a usual school day for Nathaniel Crossley and his dad, Blake. No, today they set out on a new adventure, a journey few of us will ever take - or even dream about. Today Nathaniel and his dad left for Africa.

I first met Nathaniel a couple of years ago, close to when this blog began. He was only about nine then, and even when I first met him I saw something different in this young boy who looks so much like every other young boy his age. There is a determination in Nathaniel's eyes, a steely glint of someone who believes you can do the unbelievable, and who holds a firm grasp on the notion of changing the world. Today Nathaniel heads to a place that he has helped to change, and that will, through this experience, likely change him, too.

You see when I first met Nathaniel he was embarking on a different journey, that of raising money to help build wells in Africa, a place where many go without such basic needs as clean water. He had a modest goal to raise, but when I met him I told him that I believed he would not only meet his goal but exceed it, and so he did, going even far beyond what I thought was possible. I knew even then, though, that Nathaniel was not finished. I knew he would not be satisfied with that initial accomplishment, and so I have watched in wonder - and awe - as he has gone on to raise the money to go and visit the wells in Africa he helped to build, and to climb to the summit of Kilimanjaro, where this young man will touch the sky as the African sun rises.

Nathaniel tells his own story well in his blog and on his Facebook page, and while I wrote about him a great deal initially I have not done so recently, but not because I did not support him. No, I wanted to simply observe and see what he would do and accomplish if he had to work for it, and work he did, pouring every ounce of that little frame of his into achieving, and surpassing, his goal.

And there have been challenges. Along the way Nathaniel has had to deal with some very adult issues, like racism. He has had to deal with those who believed this was not his dream but rather the dream of the adults around him (and all I have to say on that is that those people who believe this have not gotten through his initially shy exterior and had a heart to heart talk with a young man who is far older and wiser than his years, and needs no outside influence to know his own heart). He has dealt with challenges like stolen recycling bottles destined for his fund raising, and he has not just met all those challenges - he has embraced them and overcome them, finding ways to go further and do more than even I thought possible.

There are many ways you can follow Nathaniel on his journey, as he will be tweeting from @thelegofly and then there is this wonderful site where you will be able to follow his adventures very directly. You can check out Lego 4 Africa to learn more about this journey he has already been on for a couple of years, a journey that has grown just as he has done. As for me I will be anxiously waiting for when he comes home, because I know something, something I have known since I first met him. I know that Nathaniel is special, special in the kind of way that he has the potential - and the drive, vision, and passion - to change the world, and in this instance I think the world will change him, too. I think he will come back a few days older, and a few years wiser when he sees first hand the place that has inspired him. And while Nathaniel has been on this journey for a couple of years and some may see this trip to Africa as some sort of ending or culmination of it all I know something else. I know this is just the beginning for a young man who can be so very shy, but who opens up to reveal an insightful mind, a thoughtful manner, and a heart that can embrace the entire world. I know this isn't an ending. This is just the beginning for a young man who has every chance of changing the world, and making it a better place. I am so very honoured to know him, you see. It has been, in the end, life changing for me too, because in watching Nathaniel follow his heart and passion I have found the courage to follow my own. And I will be forever grateful to him, because while he changes the world he is changing those around him, too, just as he has changed me.

I would wish him luck on his travels, but Nathaniel doesn't need it. All he needs is his dad, and his mind, and his heart, and off he goes to Africa today, with all those things with him and the love and support of his wonderful mom and little brother here at home, and the support of hundreds of others who cheer him on. With him goes the spirit of Fort McMurray - and I know that when he comes home he will come home to a hero's welcome, one well deserved by a young man who has already changed Fort McMurray, and who today is off to continue changing the world. Today is lift off to Africa - and off goes one of our youngest, best, and brightest. He takes all of us with him in spirit - and I for one cannot wait until his next adventure because this is just another chapter in Nathaniel's book of life. I am anxiously watching as he writes the rest, because this is one book worth reading every single word. 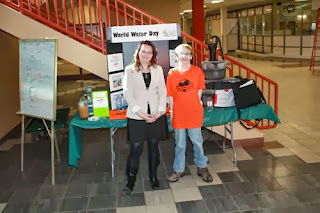