It is a bit embarrassing to admit it, perhaps, as I have lived here now for eleven years. And while during those years I have travelled Highway 63 many, many times I have never, not even once, driven it alone - until yesterday. It has been almost a year since I travelled it last, and today I can truly say: what a difference a year makes.

I have often written that this highway is like a ribbon that runs through my life. It ties right into the heart of my community, and has been the scene of many tragedies. I don't know if there is another subject I have written or talked about more frequently, and so I feel I have developed some sort of odd relationship with this road, and yesterday the highway and I continued our years-long dance.

I left Fort McMurray bright and early, anxious to escape the long weekend traffic. I set my cruise control and wondered how many would pass me as I did the speed limit - and many did, although I was intrigued by the semitruck who planted himself firmly behind me for the entire length of the highway. We made a convoy of two, him and I, and on  occasion I felt like I had a "big brother" behind me, watching out. I realize most likely he was just going the same speed as I, but while he had many chances to pass me he didn't, and so we travelled down the highway together.

I marvelled at the progress on the twinning project. Since last year the amount of land cleared and being prepared is astonishing. I realize the project is not due for completion until the fall of 2016, but the truly massive work is the clearing and levelling, which appears to be progressing incredibly well. That progress made me smile, because on occasion I would catch a glimpse of crosses at the side of the road, and I know that the highway, once twinned, will create a lot fewer of those crosses, and a lot more safe trips as the people of my community travel the  highway that connects us with the world.

There was one moment in particular that both terrified me and gratified me, though. My truck friend and I were travelling along when suddenly a small white car zoomed past us both, passing us on double solids - and right into oncoming traffic. His speed was extremely high, and he cut sharply in front of me to avoid colliding with the first car in that oncoming lane. I was deeply pleased, though, when the second car in that lane turned out to be an RCMP cruiser, who immediately turned on his flashers and turned his car around. The miscreant white car, knowing he was busted, immediately pulled off onto a side road (I got the sense he had been through this before), and I watched in my rearview mirror as the RCMP cruiser pulled in behind him, no doubt for a wee chat about his actions that could have ended in tragedy. I shook my head and smiled, because it is so rare you see justice in action and I felt truly fortunate to have witnessed it.

I saw a lot of RCMP cruisers, actually, which means there is an increased police presence which can only help improve safety. And I saw something else, too. On the stretch between Fort McMurray and Grassland I actually saw very little aggressive or dangerous driving, with people choosing to wait until the passing lanes to pass slower traffic, and exercising patience. I was troubled, though, that things got seriously unpleasant right around Boyle, where the behaviour degraded rapidly and I found myself feeling increasingly tense about those around me speeding, passing several vehicles at a time, and ignoring basic things like double solids. I think there is still a great deal of work needing to be done, including an increased police presence in this area as there seems to a be a great number of people who feel they can drive this way with impunity.

On the whole, though, it was an incredibly pleasant drive, particularly for me - because I was nervous about the entire thing. I had never driven it alone before and I had I guess built it into a challenge in my mind, although in the end it was less of a challenge and more of a joy. I got to be buddies for a bit with a semitruck driver (and given my recent not-so-pleasant encounter with a semitruck bully I needed this to balance that), I got to see the impressive progress on the 63, I got to see a jerk pulled over when he was caught red-handed, and I got to Edmonton to pick up my precious cargo - the Intrepid Junior Blogger and her cousin. I conquered my fear of Highway 63, and I don't think I will ever truly fear driving it again, because I know the highway itself is an inanimate object with no personality and no ill will to those who travel it. The highway is safe or unsafe because of those who travel it, and yesterday I saw good stewardship and commitment to ensuring the safety of others. I am sure some day I will see another side of this, as I have in the past as a passenger, but now I know that I, as a driver, have the opportunity to contribute to keeping the highway safe, and making sure there are no more roadside crosses. And that is an opportunity all those who drive the 63 have, too. 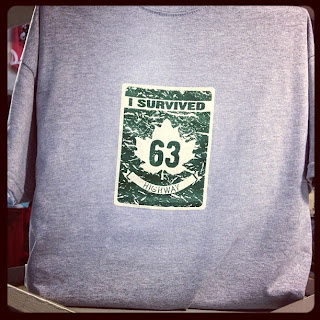 I saw this T-shirt in the Peter Pond Mall last week, and I could not decide if I found it offensive, or simply the height of hubris. I don't think it's accurate, because I did not survive the "highway" - I survived the people who drive it, and who have the power to make it great - or terrible. I didn't survive Highway 63, but yesterday I experienced it in a new way, on my own, singing along with my radio and under the watchful eye of my guardian angel truck driver. I wouldn't say I survived Highway 63. I would say yesterday I celebrated it, and what it can become - the lifeline for my community, and not a source of heartbreak and pain. Just a highway, nothing more and nothing less. And you know what? I think every single day it is getting closer and closer to becoming exactly that.


My thanks to Premier Redford
and the Alberta government
for keeping their word and
acting quickly on twinning
and increased police patrols.

My thanks to the RCMP
who patrol our highway,
and keep us safe from those
who abuse their privilege to drive.

My thanks to the mysterious semi-truck driver
who unknowingly made me feel protected.

And finally my sincere thanks to all
who travel Highway 63
and exercise safe driving practices.
You are the reason
we arrive home safe
to those we love.