Down With Protests, Up With Geography Lessons!

It isn't all that often you hear about protests in Fort McMurray, and normally when you do they are directed towards the oil sands industry. I was intrigued this week though when reports of informal protests began to appear on my social media, and the protests seemed to be focused on one of the new retailers in the Peter Pond Mall.

Peter Pond Mall, as you might know, has opened up several new retailers in the space left behind when Zellers vacated. It has been delightful to see these new stores open up, including The Children's Place, David's Tea, Ardene, and Spencer's - but it is the last store that seems to be the target of these protests.

Spencer's is a chain store, and if you have been in one before (in the West Edmonton Mall, for instance) you have likely wandered around enough to discover that deep in the back of the store is an adult section. This adult section, which is really just a part of a much larger store devoted to gag gifts and t-shirts and backpacks, seems to be the focus of the protests.

I wonder if perhaps those protesting were not here when the local triple-X store had a storefront on the main floor of the mall, with most of their wares in full view of all who walked by. Lingerie featured prominently in the window displays, but the clear glass offered anyone wandering by a pretty good idea of what the store contained. I questioned the wisdom of that store, but even back then, with my 3-year old in tow, I did not think to "protest" it - I just didn't go into it.

And that is truly the beauty of all this. As consumers we have a very powerful way of determining what stores do and do not appear in our malls and on our streets - our money. We vote with our wallets, and if we do not want a store in our community then the surest way to get rid of them is to withhold our cash - and not through protests.

Here's the thing, though. I wandered through Spencer's the other day. I noted the funny coffee mugs, and the backpacks. I looked at wallets, and belts, and then I slipped to the back of the store and while it is definitely adult in nature I did not see anything that offended me in any way. I suppose I would be startled if I ended up back there with a young child and found myself trying to explain some of the items, but to be quite honest a simple "it's an adult thing, let's go get some ice cream", is usually enough to distract even the most persistent child.

And since we can vote with our wallets I walked around the store, found two t-shirts the Intrepid Junior Blogger would love (Doctor Who and Big Bang Theory), and took them, and my wallet, to the counter, where I happily paid and wandered off to make my kid smile. I voted with my wallet, and my vote is that Spencer's should stay, adult section and all.

My only real concern about this entire scenario? That one of the protesters, when told that Spencer's is a chain that exists in Ontario, apparently shouted in reply: "This isn't Ontario, this is Newfoundland" - and that response is to me far more worrisome than an adult section, as while our schools seem to be doing okay in sex ed apparently we need a lot more work in geography. That seems more worthy of concern - and protest.

Disclaimer - this map is meant to be funny.
You know, haha?
No getting offended, it ruins all the haha.
﻿ 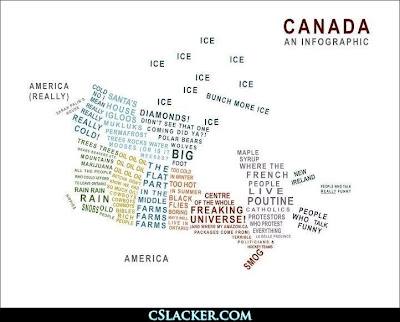