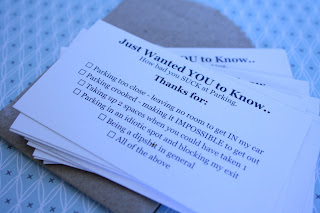 It’s become so endemic that I don’t even bother taking photos anymore, because it’s the norm and not the exception. I encounter it in every single parking lot and on every single street, and it seems to be getting worse, not better. Even the Intrepid Junior Blogger comments on it now, her observant eye often spotting them before I do. The epidemic? Well, as the IJB would term it, “parking douchebags”.
I don’t think I have to explain the term to you, but for quick reference it’s just people who cannot seem to grasp the concept of parking between the lines, not parking on the sidewalk, not blocking driveways, and not parking like jerks. I mean it’s quite the impressive feat when someone can stretch their mid-size car across three parking spots (I’m glad I don’t share a bed with these jackasses, can you imagine how often you’d end up on the floor as they spread across the entire king size trying to claim as much territory as possible?), but it’s more offensive than commendable.


For awhile I was taking photos of them all, but honestly I was finding my photos app on my phone filled with lousy parking pictures, which was getting a bit depressing. And, well, there was that day when someone busted me in the grocery store lot taking a photo of his truck and didn’t respond well when I informed him I was taking pictures of vehicles parked like they’d been abandoned in a tornado (well, and I might have made some reference to the intelligence of those who park this way, which might have been pushing my luck just a wee bit).
The question becomes: why do people feel it is their right to park in ways that infringe on others? My friend Nolan Haukeness refers to them as “Fort McMurray royalty”, and there is a whiff of entitlement going on with those who choose to park like this. More than that, though, I think there is a plain lack of thought and consideration going on, with people not thinking about – or caring – what impact this has on others.


And what is the impact of bad parking, you say? Perhaps you think there is none, and you are one of the ones who parks this way. I will share with you a story from a few months ago.
One day I was in a large parking lot, and when I found my car I realized that the person next to me had wedged their vehicle in so tightly and so close to mine that I could not get in my driver side door. And believe me I tried, opening it and trying to slither in, but there was no way, which left me climbing in through the passenger side door. I won’t go into details about how I was wearing a dress and how climbing over my gear shift was an incredibly unpleasant experience, and how the subsequent bruises lasted for days – but when I finally found myself seated in the driver’s seat I was seething with rage. I felt so impotent, right until I spotted the bag of garbage on the floor of the passenger side. It was a few days old, coffee cups and banana peels and such, a bit ripe-smelling and certainly overdue to be tossed. I looked at it, and I looked at the truck beside me...and then I quietly rolled down my window and tied the bag of garbage to the truck’s passenger side door handle. I felt much better almost instantly, my message – garbage attracts garbage – abundantly clear I thought. I drove away (after extricating myself carefully from the parking spot) smirking over how this individual would likely drive off not even realizing they had garbage tied to their door handle, discovering it later and puzzling over how it got there. So, if that was you and you are reading this – that was me, and I don’t apologize. 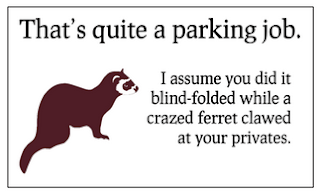 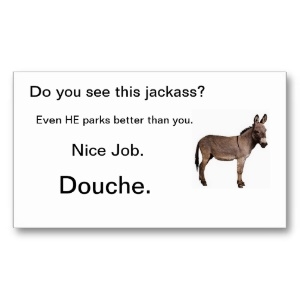 So, as the IJB says – don’t be a douche. Stop parking like you own the lots and the streets, and start acting like you share these areas with others, because you do. A long time ago your parents taught you to share with others and colour between the lines, so smarten up and give it a try – or risk finding garbage tied to your door handle, too. Or maybe one of these cards, which I am thinking of printing up and providing to friends – because frankly I am far from the only one tired of this. So, the next time you are in a parking lot and thinking about parking like a jerk – or aren’t thinking at all – remember this post and ask yourself “Am I being a douche?” – and if the answer is yes then ask yourself if that’s how you want others to see you, too. Because trust me - we do.


** Disclaimer – I am not a big fan of the word “douche” or “douchebag”, but as the IJB has explained to me on numerous occasions this is perhaps one of the most descriptive words for behaviour that defies explanation or logic. I defer to her wisdom on this point.
at August 09, 2013