I had such impressive plans, too. The day was to begin with coffee with two residents new to our community, followed by a leisurely drive out to Anzac to check out the Northern Warrior Race benefitting my beloved Centre of Hope. Then I would aim my car for home and head to interPLAY, to take in some plays and a burlesque show and enjoy some live music. And then the next day I would get up and head down to interPLAY again for more plays and to wrap it all up with one final fix of mini-donuts.
It started well, the Intrepid Junior Blogger and I down at interPLAY on Friday evening munching on Chipstix and poutine, watching the Aerial Angels perform (a perennial favourite for her), and me picking up all my tickets for the rest of the weekend. I wish I had savoured the evening a bit more, though, as what I didn’t expect was the headache that would roll in like summer storm clouds and make the thought of facing sun and crowds and noise impossible. I didn’t expect it would be my only time spent at my favourite street festival, but sadly it was.

Saturday morning dawned and I found myself facing a throbbing headache, and one I knew would worsen if I continued with my plans. And so I settled into bed, watching the events of interPLAY and the Northern Warrior Race unfold vicariously via social media. I read the tweets and Facebook posts when my head allowed it, and I loved all the photos coming out of both events, warriors covered in purple paint looking oddly like the abstract version of the face-painted children at interPLAY. I was sad to miss both events, but in a way it was intriguing to watch them play out as I did, just beyond my grasp but close enough that I could get a sense of what was happening mere kilometres away from me.


It is a pleasure to note that both events were tremendously successful this year. Both had many, many participants who expressed their joy at being involved, from volunteers to organizers to attendees. The Northern Warrior Race looked to be a stunningly good time, participants hot and sweaty and purple by the end, and those at interPLAY looked no less hot and sweaty but more red from the sun than purple. What I noticed most in the photos, however, were the smiles of pure joy that appeared, and the sense that those at these events were having the time of their lives. And despite my headache and wishing I could be there I smiled too, simply knowing what a great weekend it was in my community.
Late one night this weekend my headache cleared enough for me to venture out of the house on a small drive. I was keen to see the Perseid meteor shower, a yearly astronomical occurrence that I had never really taken the time to observe but that this year I was determined to enjoy. As it was cool and dark and quiet I expected my headache could manage it, and so I found myself driving on Highway 63 until I reached the turnoff for Maqua Lake. I stopped there and observed the meteors for some time, marvelling at the brief streaks of light across the sky, and then I headed home.


The following night I returned to this spot, anxious to see the meteors once again. This time, though, I turned and stopped on the road, but as it was still light I drove further in, realizing I had never visited this spot, and never even heard much about it. I drove past the cell phone towers, and what appeared to be a fire spotting tower (something I thought was more legend than reality in 2013). I stopped at the gate for the Maqua Lake entrance, a gate indicating the park was open for day use from dawn to dusk, and that one must walk in.
I hesitated, but there was enough light to count as daylight, and so dusk had not yet begun (and dusk is a rather subjective term anyhow). I ventured down the road, not sure how far I would have to walk, wondering if this was an unwise idea given the night creatures present in our forests.


It was a short walk, though, and when I approached what appeared to be a sandy beach I stopped in utter surprise – as Maqua Lake is astonishingly beautiful.
The sun was just setting, and the moon peeking through. The sky was a vibrant shade as the day’s light faded away, and the water of the lake was smooth as glass, broken on occasion by the fish I imagine lurk underneath. It was a picture of stunning beauty, and as I stood there in solitude I thought about how there are so many places like this, places that even after a decade here I have not discovered or seen. I stood in wonder for a few moments, listening to the absolute silence, and then, before true dusk descended and I found myself in violation of a curfew I snuck back into my car and drove away.


You see I am deeply sad I missed interPLAY this year, and the Northern Warrior Race. If it wasn’t for that persistent headache, though, I never would have ventured out into the cool dark night to seek a place far from crowds and lights to see a meteor shower. I never would have stood beside Maqua Lake in the growing darkness and thought about how beautiful it is here, and our incredibly good fortune to live in this place of wonder and beauty. I never would have connected with this place that will now live forever in my memory, and I would have missed an opportunity to explore a place I have never before seen but that is moments from my community. I will always be sad I missed the big events this past weekend – but in the end I will be grateful for a nagging headache that led me in a different direction, and to a place of amazing beauty. 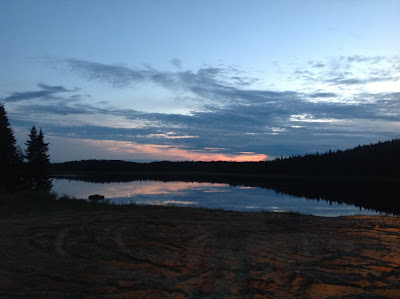 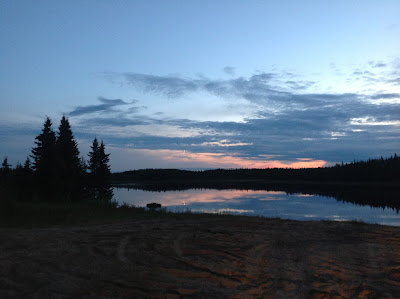 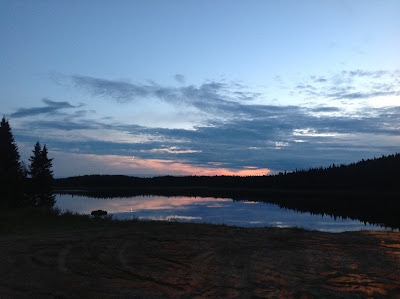 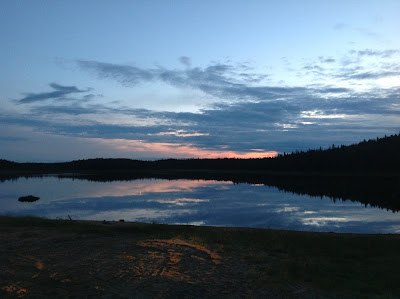