My daughter has blue hair.

It's true, you see. Recently the Intrepid Junior Blogger dyed her hair a rather astonishing shade of turquoise, after months of thought and discussion. The discussion wasn't about whether or not she could dye her hair, but rather about what colour she would most like to dye it. And, this past week, she decided on a shade that is decidedly unusual, and not normally seen in nature aside from peacocks. And it looks great.

I was a teen in the 1980's, and in that time my hair was every colour of the rainbow. I recall a family friend, seeing me for the first time with coloured hair, commenting that I looked like an exotic bird. I also recall the many comments I got about my hair colour choices, many of them negative, and often coming from adults. I recall how my parents, farming folks by history, struggled a bit with it, and then got over it, realizing the coloured hair hadn't changed a single thing about me. I rather thought that in the intervening years the practice of unusual hair colours had become rather commonplace, and certainly less prone to provoke comments - but I may have miscalculated.

I took the IJB and her cousin to the mall this week. I noticed the occasional stares, but it was the comments of two women, likely close in age to me, that caught my attention. Behind us in the mall concourse they said, loudly enough so I would be sure to hear it, that they "could not believe her mother would allow her to dye her hair THAT colour."

I wish I had whipped around to reply to them, but I was caught by surprise, and so I didn't. But if I had, this is likely what I would have said:

I didn't allow my daughter to colour her hair blue. I encouraged it. I took her to my hair stylist to get it bleached in preparation. I bought the blue dye. I was there when she and her cousin did it - and when it fades and the time comes to dye it again? I will do it for her myself, any shade she wants. Why? Because I don't own my kid.

Yes, you heard right. My kid is an independent creature with her own thoughts and ideas, and her own way of doing things. We agree on most things, and part ways on others. At almost fourteen I respect her autonomy in certain things - including the choice to colour her hair. In fact when she was in Grade Three and wanted permanent pink streaks dyed into her hair? I made sure she got them, because it is hair, and it is hers, and it makes her happy, and who the hell am I to tell her she can't do it? In the world of "pick your battles carefully" this isn't even a tiny dust-up.

Last night we went to an event and I was beyond pleased that the IJB was surrounded by adults who told her how much they love her hair. They are the kind of adults I want in her life, the ones who see past blue hair (and crazy clothes, and, if some day she chooses, tattoos and anything else) and see her for who she is, blue hair and all. These are the adults who are the role models I want her to embrace, and who she will remember.

So, if you see a kid with blue hair around town (and wearing heels) then it is likely mine. And if you don't like her blue hair maybe you should think about why it matters to you, and why you think others should live to your standards of behaviour. Recently I had an encounter on this blog with a commenter who chose to remain anonymous (no surprise there, the cowardly ones who like to leave nasty hurtful words always do) and who tried to "shame" me into conforming to the behaviour standard to which they subscribe - but who are they to tell me what is the proper way to behave, exactly? Who are they to dictate how I should spend my time, run my life, or colour my hair? Do they have to live my life? The answer, of course, is no, and I spent some time discussing this with the IJB. It would seem she has learned this lesson well over the years - as the IJB now has blue hair. And for the record we don't care what you think of it, either. 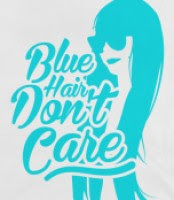