It was rather lovely to see the third act of TEDx Fort McMurray: Shift in Thought, close with someone I knew even before I became McMurray Musings. The first act, simply called "Art", ended with presenter Claude Giroux, and his thoughts on performing arts, particularly theatre, an area in which he has considerable experience.

I first encountered Claude several years ago when he was the Executive Director of Events Wood Buffalo. EWB was offering a summer camp, but not a camp of the usual sort. No, they were offering a week-long circus camp, an opportunity for children to learn some of the circus arts, and I knew the Intrepid Junior Blogger had to attend. The camp, Starfish Circus, was run in conjunction with a group out of Kalamazoo called "The Aerial Angels", a collective of women that the IJB and I had seen perform at interPLAY, and of whom we had become very fond. I admired their strength and courage and pure determination while the IJB loved to watch them soar on the aerial silks or perform on the aerial hoop - and so we signed her up for circus camp. I spent a good deal of my week at that camp too, as a volunteer, and what I saw impressed me because Claude is passionate about the arts, and particularly about the performing arts. He and I have met many times since then, our paths crossing often, even after he had moved his family to Vancouver to pursue his career there (although leaving one foot firmly planted in Fort McMurray as the Artistic Director of Keyano Theatre).

When I saw Claude's TEDx talk for the first time I was transfixed. Claude is a performer too, with that big booming voice matched with a big booming personality, irrepressible and funny and irreverent all at the same time. His passion for the arts rings out through his presentation, and his desire to keep it alive clear and strong. I too am passionate about the performing arts, as the circus camp experience has never been forgotten by the IJB. I think that camp, and the moment when she performed on stage for the final performance, suspended ten feet above the ground in an aerial hoop, only her hips keeping her from falling to the stage, hooked her on the performing arts. Since then she has performed in several dramatic productions in her school, and expressed her intent to learn more of the circus arts, perhaps even becoming a street busker on evenings and weekends when she is a bit older. She got a taste of the stage, and what she tasted she loved. It was a kind of freedom of expression that enchanted her, a sort of epiphany on what the world can hold. 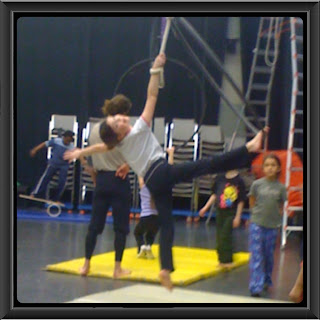 I am delighted to say that the video of Claude's performance has, as they say, "gone viral", with thousands of views in a few short days. I must also say, though, that I am not in the least surprised because he delivers a profound and important message with passion and clarity. His love of the performing arts shines, and through his passion you can find your own for an art form that goes back as far as human history - because the performing arts are, in the end, the telling of stories, something we as humans have done since the first gathering around a fire in a cave.

I present to you the charming Claude Giroux, and his thoughts on the performing arts: