This past Tuesday was one of those days at work when things all seem a bit wonky. The day after a long weekend, the day when you realize the three days off were lovely, but that you will now pay for that frivolity with a day of catch up and feeling hopelessly behind. There was a lovely glimmer of good news, though, when I received word that my boss, Tim Reid, had been named to Alberta's 50 Most Influential People 2013 by Alberta Venture. I was delighted, as it is richly deserved given what Tim has accomplished in his time in Fort McMurray, and I clicked on the link I was sent so I could see the rest of those 49 names. I saw he was in stellar company, the likes of our Premier and other figures of note, and then when I glanced at the top of the page I noticed another "Top Influencers" list - this one for people on Twitter.

The only reason I clicked on that link, you see, was my assumption that my dear friend Kathleen, better known as "Kikki Planet", would appear on that list. Kikki is a  Twitter legend, someone I think has had tremendous impact in this province with nothing more than a website and a few thousand well crafted and well aimed 140-character messages on Twitter. I scrolled down the list of Top Twitter Influencers, seeing names I know well from Twitter, and people I deeply admire, such as Dave Cournoyer, Mack Male, Naheed Nenshi, and so many other names I consider to be not only influential but worthy of respect. I scrolled down even further, delighted to see our local MLA Don Scott listed, his penchant for sharing news from government and community noted by this designation of top Twitter influencer. And then I saw Kathleen's name and broke out into a wide smile, as I had known she would be there. And then I saw a familiar name, right under Kikki's. A name and handle I know well, listed alphabetically so coming in at the very bottom of the page. A name that should be well known to me - because it is mine. 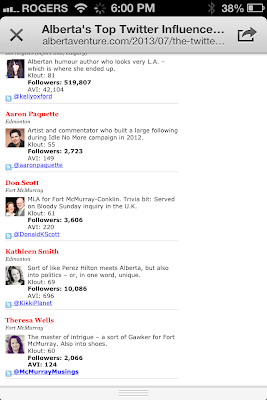 To say I was stunned is an understatement. First I giggled - and then I laughed until my coworkers asked if I was alright, me finally stopping long enough to choke out what I had discovered. I suppose the laughter stemmed from my surprise, because I had no expectation I would be on that list.

There are those who may see me commenting on this subject as narcissistic. So be it - I am quite comfortable in my own skin, and I think it is quite okay to celebrate successes, even if they are our own. Mine is tempered by knowing that a great deal of this is due to those who interact with me on Twitter, who make this into a dialogue and not a running monologue. who argue with me, laugh with me, inspire me, and otherwise make Twitter into a place where I can share what I know and learn from others who know far more than I do. I enjoy Twitter because I enjoy interaction, and I enjoy people. I enjoy conversation, and I enjoy the exchange of ideas.

I am quite completely honoured to be in the company of the "Twitterati", as Alberta Venture dubbed this group. I am a bit uncertain of my right to be there, and I am bemused at being described as "the master of intrigue" (not something I would ever, ever call myself). I am thankful for all those who tweet at me, and who reply to my tweets. I am delighted to be part of a community that encompasses my own community right here in Fort McMurray but goes far farther, too, reaching out into the world and allowing me to share my story of life here. Does being a member of the "Twitterati" have any true meaning, any significant impact? I don't know, and I suppose I am a bit dubious about it as on occasion I suspect my only real impact is that I have likely bolstered the retail shoe economy by getting more people hooked on shoes - but am I honoured, pleased, and delighted to be on this list? You are damn right I am. I am more than thrilled to be a Twit. I mean a Tweeter. I mean a Twitterati, whatever that really means. I suppose in the end I hope it just means that in some very small way I have affected the lives of others - even if only for one brief tweet.

My thanks to
Alberta Venture
for including me on the list
and my congrats to all my fellow
"Twitterati" ;)
at July 06, 2013