CanadaROCKS, Fireworks, A Parade, and Pride

We had been vacillating for most of the day, to be honest. The Intrepid Junior Blogger and I were seated comfortably on the sofa, deep into pizza and potato chips, and ogling Hugh Jackman as Wolverine in The X-Men. Both of us were pretty exhausted, me after several busy weeks at work and preparing for a house move, and her after a long year of school and pre-summer-camp preparations. We had been tempted by the concert going on down at the Snye, the annual CanadaROCKS festival from Events Wood Buffalo, but inertia had set in. When my cell phone buzzed with a message I turned to the IJB and said “Should we go down at 11 and catch the last band? And then the fireworks?” Those placid huge brown eyes turned on me and she said “Fireworks?” – and that is how we found ourselves down at the park behind the Clearwater Public Education Centre as the daylight began to fade.
We found a place to park, quite close to the field, in a secret parking lot I know (and no, I am not going to tell you where it is as then it won’t be secret, and next time I’ll have to fight you for a spot, and besides there has to be some bonus in living here long enough to have discovered these secret spots). We walked in, her and I, both of us wearing our Doc Marten concert boots, ready to be entertained. We arrived at the field and made our way inside, just in time to catch the final two songs from Simple Plan, who had apparently extended their set in order to accommodate Mother Mother, the band from Vancouver who had encountered significant challenges to be there. Cancelled and delayed flights, missing gear, and all the other frustrations known by every touring band, Mother Mother had arrived at the concert venue with a police escort.

We stood at the back of the field, spraying each other with Deep Woods Off when we realized the ferocious appetite of the hovering mosquitoes. I looked at the IJB and asked if she wanted to be closer to the stage for Mother Mother, and she, being my child, said yes, as she and I both want to be in the middle of whatever is happening, for better or worse. The stage front was crowded, though, and I could see doubt creeping into her. I told her to stay right behind me, and to keep up – and then we dove in, me knowing that the crowd would thin when Simple Plan left the stage. And so we ended up just one row back from the front of the stage, ready for Mother Mother. 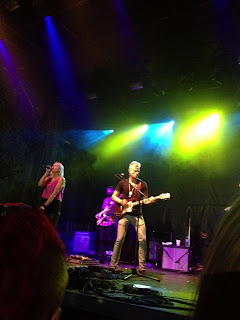 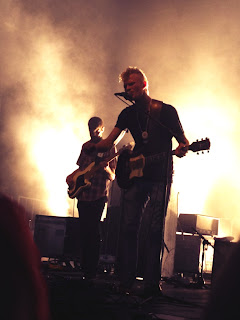 When Mother Mother hit the stage we both stood in awe, as they are an amazing band. The lead singer channels a young Billy Idol, and the IJB was quite taken with one of the female keyboardists who, as she said, seemed so enthusiastic and into the music. We enjoyed the brief set, truncated a bit by the lateness of their arrival and the need to move on to the fireworks. At one point, when some young men behind us got a bit rowdy, a young man with a bright red mohawk who was up against the fence asked if the IJB would like his spot at the fence, and so she moved ahead, him standing behind her in a protective manner, keeping her safe from the rowdy ones behind us (that young man with the red mohawk is a stranger of whom I am now very fond, as this simple act of kindness impressed me beyond words). 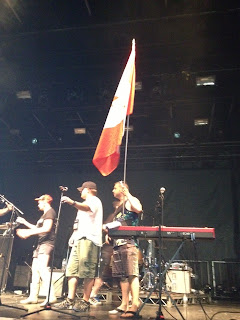 When Mother Mother hit their final notes and left the stage out came local band Destranged, to wave a Canadian flag and lead the crowd in “Oh Canada” – and then the first booms were heard, and the IJB and I rushed towards the Snye to catch the fireworks to usher in Canada Day.


It was an amazing display, too, such beautiful fireworks exploding over the riverbank. As they exploded the IJB asked me questions – how they arranged the firing sequence, how they got the different colours, how pyrotechnics work – leading me to quiet mutterings about how I thought that was why the internet had given us Google, to save people like me from answering questions we don’t have the faintest idea about, but I tried to answer in my most likely highly inaccurate way. 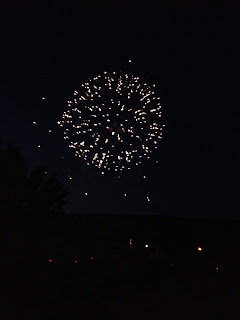 We oohed and we aahed, and we hugged each other, and afterwards we made our way home to crawl into bed smelling of bug spray, to get up early and get ready for the Canada Day parade.


The IJB and I have been attending the parade for so many years now. I remember when she was so very little, although this year when she appeared wearing her denim shorts and striped blazer and bright red lipstick the fact that she is almost fourteen reached into my heart and grabbed it. I realized how few and precious these remaining parade years are, and so we ventured out, first to Starbucks and then to secure a spot on the parade route. 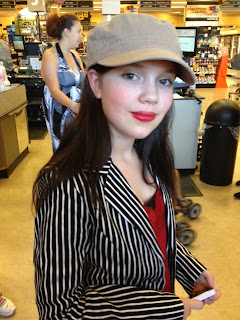 We were, as usual, enchanted. The RMWB City Centre float, made of the recycled floor from the Syncrude Sport and Wellness Centre. The bagpipers. The Communities in Bloom group with wheelbarrows filled with greenery. Local politicians, schoolchildren, dogs, and all the rest, all the people who make up this community – our home. I think, though, she and I were most taken with all the various cultural groups. After the third or fourth group she turned to me and commented on how this was truly the most multicultural place, how languages from Tagalog to Russian are spoken here, how this is the place where people from around the world choose to come and stay – and I realized that in our eleven years here she has become a citizen of the world, a global one who has learned to appreciate and value the cultural identities and traditions of others. 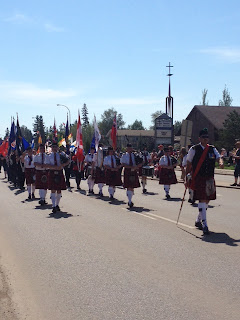 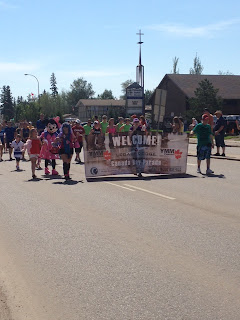 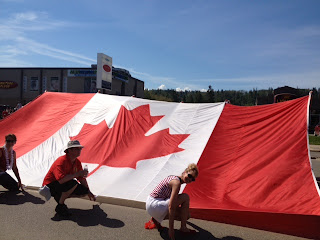 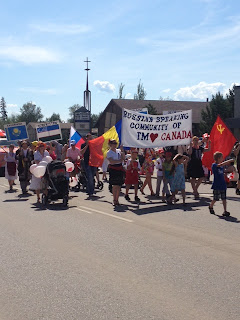 The parade was, in a word, incredible. It was hot just to watch it, the IJB and I dripping sweat, and I cannot even imagine the tenacity of those walking in it. And yet they did, celebrating Canada Day and community and home.
The IJB looked at me as we made our way back to the car when the parade finally ended, both of us hot and sweaty and in need of a nap. She said “I am really proud to be Canadian. We might not shove it in other people’s faces, but I think we are pretty patriotic. Look at all those flags, all that red and white. I am a proud Canadian.” I looked back at her and smiled, and said “Me too, kitten. Me too.” And so I am.


My thanks to
Events Wood Buffalo
for yet another amazing year
of Canada Day celebrations!﻿
at July 02, 2013