Flying the Flag of Community - and Humanity 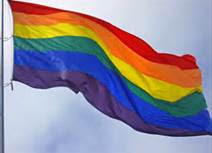 There are incidents that are troubling on so many levels, and for so many different reasons. There are events that are celebratory in nature but that take a dark turn, and a darker tone. One of these incidents and events happened recently when the local LGBTQommunity held the city’s first ever gay pride event downtown at a local pub – and at some point during the evening the colourful rainbow flag that celebrates diversity and tolerance was stolen, and burned in the parking lot.

That flag was the property of the local group that organized the event, and for that reason alone it is a deeply troubling incident, because the destruction of property belonging to others is never acceptable. There is a deeper reason for concern, though, and one that touches far further down into human nature. The burning of a flag that celebrates gay pride and identity can only be read as a message – a message of intolerance, A message of hate. A message that says that others who are not “like us” – whether through race, religion, or sexual orientation – are not welcome. It is a deeply troubling message, and one that makes me both angry and sad because of what it says about the individuals who would burn this flag and those who would think it is acceptable to do so.


Look, hatred is never acceptable. It does not matter if it is directed against someone because they are gay, or a different race, or a different religion. Every single person on this planet is exactly that first – a person. And people are deserving of dignity and respect, not because of their sexual orientation or colour or anything else but simply because they are people. If we expect others to give us the dignity and respect we wish to receive then we must give it to every single person who shares the planet with us, because we are no different from each other.
Yes, no different. It doesn’t matter if you are gay or straight, male or female, black or white, or any of the other slight variations that make us “different”. We share the same DNA, the same species, and the same planet. If we focus on those tiny differences of gender or race or sexual orientation we fail to see the things that tie us together – things like our ability to love, our compassion, our wisdom, our frailty, and our humanity. What a boring world it would be without these little differences, differences that are so minute compared to all that makes us the same. We are born, and we die, and all the time that is between those two points should be spent being kind and accepting and understanding of each other.


Why should we spend our time that way? Because hatred is an insidious evil that ferments. Hatred has led to genocides and holocausts. Hatred has led to mass murders and all manner of evil. And so those who trade in hatred, whether it is burning flags or any other act of disrespect, are no more and no less than purveyors of evil.
There is perhaps a lesson in all this, that we have a long way to go still until we are the welcoming and tolerant community – and world – we want to be. Perhaps there is a lesson about the importance of helping others to understand that we are more alike than different, and that the things that tie us together are far more intrinsic than flags.


I think perhaps it is time we have this discussion in our community, particularly as we begin to grow again and become increasingly diverse. I see new faces almost every single day, and while those faces don’t look exactly like mine what is the same is why they are here: opportunity, potential, and the chance to make this place home. This home of mine is not just my home, but their home, and likely soon to be home to thousands and thousands of others who will be slightly different from me in some respects but exactly like me in absolutely every way that matters. I want them to be able to fly their flags, whether they are red and white, or red and white and blue, or any other colour – including a rainbow – with no fear of flames. I want them to find this place a community where they are welcomed because they chose to come here and contribute to it, and because they are human. I want them to know that what binds us – as people and as a community – is powerful. And each and every single one of us has the power to make this happen, because this community is us. We are the community, and if we, as individuals, stand up and say that burning flags is unacceptable then we state as a community that we stand united against hatred, and intolerance, and ignorance, and fear. And so today I stand and say that burning that brightly coloured rainbow flag was not acceptable, and was not reflective of my community and home. I hope that you, as individuals, will all stand with me, so we can stand together, as a community, united and strong – and human.
No one should ever be afraid to fly
a flag of their True Colours -
whatever shade they happen to be.﻿
at July 30, 2013