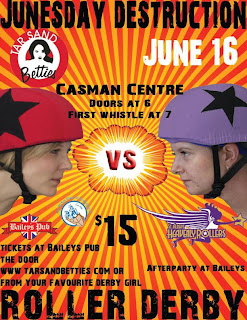 It wasn't that long ago that I wrote about Fort McMurray's very first roller derby bout hosted by our very own Tar Sand Betties. That first bout amazed me in many ways, but most of all because for a first time event it attracted an astonishing number of people in a city where it can be challenging to launch a new event. So, when I heard about Junesday Destruction, Fort Mac's second-ever roller derby bout, I knew I had to be there. 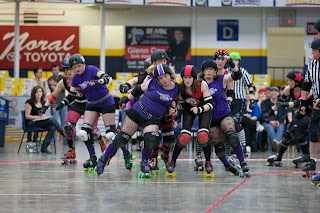 This time I was wiser, however, and I arrived on time to the Casman Centre to make sure I could secure parking. I had in tow the older Intrepid Junior Blogger, who finds roller derby intriguing (and I think it appeals to her admittedly quirky personality, much like my own, really). The younger Junior Blogger had opted to stay home, having found the first roller derby experience a bit baffling, and my British best friend, who had attended the last bout, still couldn't quite wrap his head around the experience. So, it was just the two of us, and we quickly found seats on the floor, right behind the "crash seating" (crash seating means you could end up with a roller derby girl on your lap, which seemed to seriously appeal to the men who also sat there with hopeful expressions and outstretched arms every time the girls whizzed by). 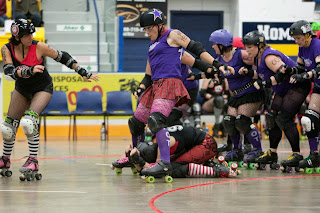 This time the Betties were hosting a team from St. Albert, the Heavenly Rollers. It seems this roller derby thing is picking up some steam in this province, as there appears to be several teams on the go.  And it truly isn't hard to see why, either, because roller derby is fun. It is fast paced, and it can be quite aggressive, as we saw at Junesday Destruction. The first roller derby bout a few weeks ago seemed a bit tame, but not this one. Right from the first whistle the game was very much on, and penalties mounted as did the points as some aggression got worked out on the track. 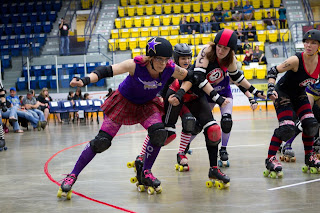 I was pleased this time that they showed a short video explaining the rules of roller derby, as this seems to cause great confusion for many. It really isn't that complicated, but for those who have never seen it it could seem quite difficult to comprehend. Whether you get the rules or not, though, it's easy to buy into the infectious nature of the sport. These women play hard ball. They don't yield, they don't give up, and frankly they have the best nicknames I've ever heard. 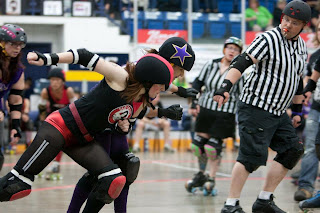 With names like "Belle Camino", "Hot-Per-Sue-T", and "Pepper Longstocking" they whiz around that track, racking up points, penalties, and mayhem. They block, they push, they shove, they sneak through the pack, and they generally speaking just have a helluva good time doing it. It's incredible to watch and probably even more fun to do, although I think I might be too old to actually do it. I began thinking about roller derby names for myself - things like "McMurray Mayhem" or "Mad Musings" sprang to mind - but I fear I am too old to break things like legs and arms (and heads) so I am content to sit and watch in wonder. 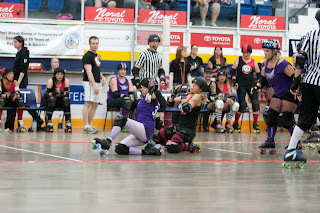 The bout was fast and furious, and in the end the Betties were triumphant, soundly trouncing the Heavenly Rollers with a score of 154-62. In fact the bout ended early, the team captains calling the game off (for reasons of which I am not entirely sure, although I suspect it had something to do with the fact that it was pretty much over simply based on that score alone). And when it was all done once again I was so proud of the Betties - and of all the people who do things like this in our community. 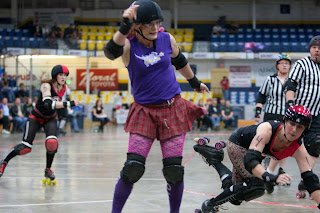 You see to be a part of a community you need to find your niche in it. Some people find it in their jobs, and some find it in volunteering. Some find it in artistic pursuits, and some, like me, find it in writing. And some find it in starting little groups like the Tar Sand Betties, taking a dream and making it into a reality, and forging something truly new that did not exist here before. They don't just find a niche, they make one, and others are drawn to that niche, too. This is how community is built, people, not by industry or government. It's built by people wearing booty shorts and roller skates, whizzing around a track, and trying to avoid landing in the eagerly awaiting laps in crash seating.


My sincere and profound thanks to
The Tar Sand Betties
for the invitation to attend the bout -
and for being community leaders in booty shorts and skates! 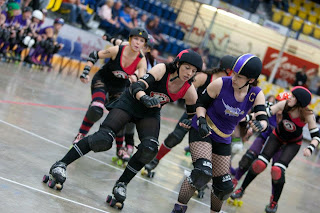