The Race Is On - Round Two, RMWB Council

I wrote a couple of weeks ago about three candidates in the upcoming municipal by-election. At that time I invited any candidates who wished to speak to me to do so in order for me to share with my readers what I learned about them, and their platform. Last week Catholic school board trustee Keith McGrath contacted me and we arranged to meet for coffee to talk - and where better to meet than Tim Horton's?

Keith and I sat down at Tim's and talked about a lot of things, including his current tenure as trustee, and his previous runs at council. As Keith says this is not his first time to try to get on council - in fact he has run more than once before - but this is the time he has expended the most effort (which is quite obvious from the massive amount of signs bearing Keith's name and that pink background - and regardless of whether you like them or not those signs stick in your memory).

Keith has been here in Fort Mac for 28 years, so he has seen a lot of change in that period. He has seen growth, and he has seen the good times and the bad, the booms and the busts. Through it all he has been pursuing his career and raising his family here. He has served as a volunteer in many organizations, and his position as trustee has enabled him to get to know the community and get a feel for the concerns that are predominant in the minds of many.

Keith feels our biggest issue in the RMWB is inadequate infrastructure funding. One of the ways he would like to see this addressed is to have a tax levied on camp rooms. His sense is that camp workers, our "shadow population", use many of our services but pay little back into the community, and he would like to see that inequity addressed through the use of a tax levy.

When asked about the City Centre Revitalization Plan Keith commented that while he supports it he thinks there are other concerns we should be addressing first, like ensuring smooth traffic flow throughout the city.

Keith believes his background in construction and budgeting would be beneficial to city council as he would bring a practical aspect to the group, one familiar with construction techniques, issues, and obstacles. He points to practical issues such as the demolition of Willow Square, a collection of town homes that have been left empty and boarded up for some time now. He feels these could have been demolished and that space left empty for development as opposed to now being a very central and visible eyesore (and I'll give him that one, people, because I wince every time I drive by - those boarded up buildings make that very prominent downtown corner look a bit third-world conflict-zone city-ish).

As I did with previous candidates I asked Keith about the future of this region, about what happens at "the end of oil" (this is a topic I think about a lot, people - anyone familiar with Uranium City? Yeah, that!). He feels the future for this community probably lies in tourism, in taking advantage of our beautiful northern existence and attracting people from around the world to share it.

Keith knows he would just be one voice on council. He feels this by-election is about electing someone who is a team player, who knows the issues, and who isn't interested in "re-inventing the wheel". He sees this election as a chance to take the knowledge he has gained in his years here and his experience as a trustee and use it to further benefit the community, which is commendable as I think that sentiment has been shared by every candidate I have spoken to.

When we parted Keith quipped that election runs are expensive - and that this time around it was either run for council or buy a new Harley. With the support of his family and friends he decided to take another shot at council, and so the Harley will wait while Keith finds out if his future includes a seat on city council.


~
Alright, people. The election is this Monday, June 25th. Advance polls have been open for some time, and are open again this Saturday at MacDonald Island from 9 am to 8 pm. I have never once told you who to vote for in this blog, and I won't start now. But I am going to tell you this: go out and vote! I believe we are at a crucial juncture in the development of this region, and we need people on council who can take us boldly into the future and make the decisions that need to be made. I am very proud of our current mayor, council, and two new MLAs, and I want to see those two vacant seats at our regional council filled with good people who represent us well. So get off your asses and go vote, would you? Your vote matters, it counts, it makes a difference, and if you don't bother to vote then don't bother to whine about decisions made by council that you don't like. In my opinion if you don't vote then you also forfeit the right to complain as you've opted out of the democratic process. Don't make me listen to you complain, find out you didn't vote, and then have to explain to you why your complaint lacks any validity (trust me, neither of us will enjoy the experience). I hope to see you at the polls - because it is time to do this: 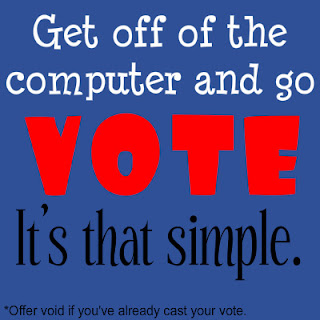