Guess What I Just Did? 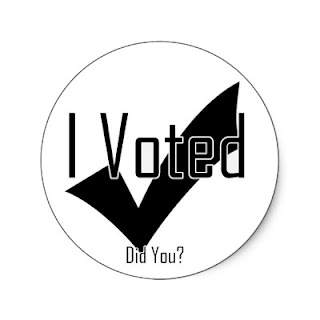 I had someone tell me that this election wasn't important because it is "just" a by-election for municipal council. Maybe they wanted to see me turn a fiery shade of red and start frothing at the mouth. I'm hoping they were joking. In the end all elections matter, people. It's all about who you want as your leader. It's all about the future. It's all about making a choice. It's all about having the privilege to make that choice, a privilege that millions in this world have fought, and continue to fight, for.

I voted today for two council positions and one public school board trustee. I won't tell you who I voted for because I don't want to influence your vote in any way, but I marked my x beside the 3 names I want to see in those positions. I placed my x beside the names of those who have earned my faith and trust, and who I feel are the best possible representatives at this time in our development (and ok, it wasn't really marking an x, it was filling in a little oval like you used to do on school exams, but you get the point, right?). I voted because it matters - and because I can.

I didn't vote in the advanced polls because I love election day. I love the walk to my local polling station, thinking about who I am voting for and why. I love that sometimes I make up my mind on that walk, especially if there are candidates who have been very close in winning my vote. By the time I arrive at the station I know my choice. I take the pen in my hand, and I mark my vote.

After the election I will likely reveal to those I voted for that I voted for them, whether they win or lose. I want to tell them why I voted for them, and why they won my vote. I want them to know how they won me over, and what I hope to see them accomplish if they have been elected. And if they don't happen to win I want them to know that they had my vote, my faith, and my belief, and that they will continue to have it in the future regardless of the outcome of the election.

It's been a helluva few months, people. A provincial election, with what I think was a stellar outcome. A municipal by-election, the results of which we will know tonight. And a growing sense that something is happening in this region, something big and exciting and powerful. You can still be a part of it, people. Go to your local polling station and mark your x (ok, fill in the oval!). Have your say in our future. Vote. The future matters - and so does your vote.