The Race Is On

Well, it's race season in Fort McMurray, people. I don't mean horse racing, car racing, or motorcycle racing. I mean political race season, and just after the recent provincial election, too. The recent election of two PC MLAs who were also elected city councillors means that two seats have now opened up on city council. Since it's 18 months until the next general election a by-election has been called for June 25th - and one week ago today nominations closed and the race really began.

The number of candidates is a bit boggling. Fourteen people have stepped forward and tossed their names into the ring. Fourteen people took a bold and brave step. And of those fourteen only two will succeed. I too am keenly interested in this election, because I believe our region is at a crucial period in development. The decisions made - or not made - will impact us for decades, and we have some significant opportunities at this point in time to change our future. Thus I find myself studying the candidates carefully, and I have expressed interest in speaking to them to find out their thoughts on this community - and on their vision for it. In the past two weeks three candidates have graciously agreed to sit down and talk to me, and I'd like to share these conversations with you. So, Fort Mac, if you haven't met them before let me introduce you to Colleen Tatum, Tyran Ault, and Matt Youens, city council hopefuls. 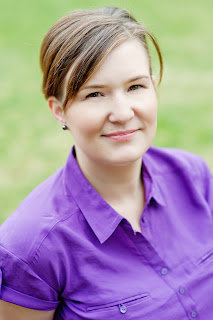 Colleen Tatum is the first candidate I interviewed. Colleen is the co-owner of a local small business (MXC Off-Road) and as such has an interesting perspective on that aspect of life in our community. Colleen and I discussed the challenges small businesses here face, from high rents to staff retention. Running a small business is a challenge anywhere, but here can be particularly difficult when considerations like land shortages are taken into account. Colleen discussed with me the need for better communication from the municipality about land releases, and a better system for allowing local business owners access to newly available commercial properties.

Colleen's slogan for the election is "Livable, sustainable, remarkable". I love the slogan, incidentally, and asked her to explain why she thinks it applies to the RMWB. Colleen sees the "livable" as making our community a place with access to adequate businesses and services, "sustainable" as a community that is not entirely based on an oil sands industry (eg, jobs that are non-oilsands related, and education for those jobs, and "remarkable" as simply being what we are. Colleen grew up right here. and has seen this region change dramatically. She commented on our pioneer spirit, and our "can do" and "we will figure it out" attitude to problem-solving.

I think what impressed me personally most about Colleen is that she is absolutely a bright young woman with a keen interest in this region, and with an understanding of both it and how small businesses function within it. She is personable and quick-witted, with a lovely smile, and her knowledge of this area shines brightly. I can tell she is deeply invested here, raising her family and owning a small business, and that speaks to her commitment and depth of caring for this place we call home. 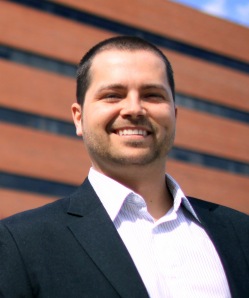 Tyran Ault was my next interview, and I was quite keen to interview Tyran as I have come to know him a bit over the past year while writing this blog. I knew that he is quite active in the community, and we had spent time together at things like the Community Image Summit Keyano College hosted some time ago. So I was intrigued to hear Tyran's take on our region.

Tyran came here when he was 9 years old, and dove into politics - in school council, that is. He has worked in radio, in communications for the RMWB, and now works for Suncor in communications. This resume has meant he has been exposed to many different sides of our community, from private business to public service to industry, and has lent him a unique perspective. Tyran has a "to do" list he would like to see accomplished, from a recreational facility in Timberlea to finding ways to encourage the development of both large and small business ventures.

Tyran's campaign slogan is "Enhancing our future locally and globally", which is another great slogan in my opinion. When I asked him to explain he told me that he sees the potential here for us to become a centre of technology and research development, a place the world looks to for solutions of complicated problems. We discussed some of the innovative research and technology development already happening here, and how that could be expanded into the sort of industry that could sustain the community when the oil sands finally drip their last drop of bitumen. He sees this region as a place that is "growing up", coming into it's own, but one that needs strong leadership to continue to thrive.

I think what impressed me most about Tyran is that he is also very bright, and passionate about both this place and our future. Just as with Colleen he is personable and funny, and he is an excellent communicator of thoughts and ideas. After just these two interviews I knew we had some very exciting candidates in this election, but I had another interview lined up as well. 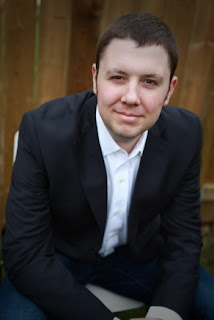 Matt Youens was the final person I interviewed in this round. Matt is also someone I came to know in the past year, and once again I was curious to see his vision for the RMWB.

Matt expressed his delight with the idea of serving on council to be part of the shaping of the region for the future. He would like to see the good work council has been doing continue, as well as provide new momentum to council. As he says (and I agree) there is always room for improvement. Matt is an HR professional, with a background in HR and communications.

Matt expressed the issues as he sees them - infrastructure, from potholes to traffic to lack of retail space. He too talked about encouraging the development of business initiatives, from small to large. He talked about the need for stronger communication between the RMWB and the community.

Matt too sees our potential as a jewel of technology development, and the potential to export that knowledge throughout the world. He commented on our ability to"dream as big as we dare and then push it just a little bit further". He also talked about how we have an opportunity to make this region a place of both form and function, having the chance to build things that are not only functional but beautiful, too.

I was impressed with Matt, too, and his comments about letting our actions be our words, and stopping talking and starting "doing" showed me that he understands that "words" just aren't enough in our rapidly changing region. Matt, as with Tyran and Colleen, is bright and personable, an effective communicator with a strong vision.

Well, folks, there you have it. Three out of our astonishing fourteen candidates interviewed, and after interviewing these three I have a few thoughts.

The first is my sheer excitement over the nature and quality of the individuals running in this civic by-election. They may all have slightly different perspectives, but Colleen, Tyran, and Matt all embody what is absolutely best about this region. Young, bright, creative, and bold, they are typical of the Fort McMurray spirit. They are each passionate about this region, and they each bring an exciting vision of the future and their potential role in it. After every single interview I was excited, and thrilled to see such passion and interest  in the place I love. I felt I had interviewed three people who love it as much as I do, and who love it enough to want to devote their time and energy to serving on council (which is not an easy job, people, councillors work very hard in our community).

These three candidates all fit right into our most prevalent age demographic, as our average age in this region is a mere 31 years. This demographic is not represented on council, and I do believe council should be representative of the community in every way. The energy, enthusiasm, and youth they bring could revitalize a council that is already quite active and vital, but a boost of fresh new energy can make it even stronger.

Most of all I think I was deeply impressed that these three have chosen to seek election. I think their interest says something about this region - that we are bold and innovative, that we are unafraid to follow our dreams and to aim high, as these three are doing. Their interest in not only our community but in serving our region in this way was absolutely heartening to me, and I found myself incredibly hopeful about the future of our region in the hands of bright young people like these.

So, there you have it, people. I'm not going to tell you who to vote for. I am going to tell you to get out there and vote, because this is a crucial point in the development of this region, and all three candidates agreed with me on that. And because we are at a crucial juncture this election - and YOUR VOTE - become even more important. This isn't the time for apathy - this is the time for action. This is our chance to have input in the future of this region, and to choose who will lead us into it. If these three young people - who are, in my opinion, each worthy of serving on council - are willing to step forward and serve us then I think we should be willing to get to a polling station on June 25th and cast our vote. This is our future, Fort Mac - let's decide it together, eh?


I'd like to thank
Colleen, Tyran, and Matt
for agreeing to speak with me
about their vision for the RMWB.

If any other candidates in the upcoming
civic election wish to speak to me
I can be reached at
McMurray Musings :)
at June 04, 2012