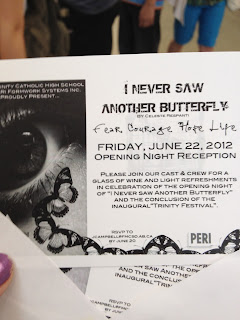 I knew I was in trouble the moment I walked into the Suncor Energy Centre for the Performing Arts at Holy Trinity High School last night. I had been kindly invited to attend the opening night of their final production of the year, and I was thrilled to say yes as I love this new theatre and the people involved in it so very much.  "I Never Saw Another Butterfly" is their year-end production, and Lucy Moore, the school principal I so admire, had told me I would be impressed with both the set and the production. I knew very little about it except some vague knowledge that it was about the Holocaust, which should have been enough to tell me that I would find this experience a bit difficult. It wasn't until I saw the set though that I realized just how difficult this might be.

I walked into the theatre to discover yet another astonishing transformation, this time a stage with seating on three sides (the ability to configure this room in different ways for different events amazes me, and I have a sneaking suspicion they can transform it into a space shuttle, too). The stage itself was scaffolding, a few smaller props, and a sign. It was the sign that immediately caught my eye and just seeing it brought the first faint sting of tears to my eyes. The sign, a simple wooden one but dominating the scaffolding, was much like this one: 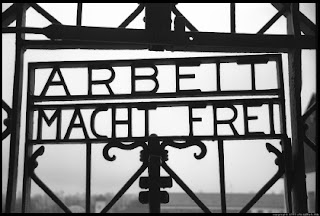 The instant I saw the sign a small knot formed in my stomach. I know very little German, but I know some. I know that these words, "arbeit macht frei", mean "work will make you free". And I know this is the sign that was above the gate at Auschwitz, a name synonymous with death, suffering, cruelty, and inhumanity. The little German I know? Well, it is because I have German ancestry. I was born in Canada, and proudly call myself Canadian to the core, but my heritage is distinctly German, on both sides, as far back as it can be traced. My heritage lies in a nation that has both proud achievements and a horrific stain on it, a nation that has accomplished many great things but has also been guilty of some of the greatest cruelties and inhumanities known to mankind. It is a heritage I have struggled with over the years, people. I have family that fought on both sides of the war, according to my now-deceased father. I have family who lived in Germany during WWII, and family who were in Canada at that time, too. I have this heritage that troubles me in some fundamental way, because I identify with my Germanic heritage, which means I claim not only their triumphs but their guilt, too.

The play began in a slow and profound way with a clap of thunder and a sudden plunge into complete darkness, and it played out upon the stage in front of me. It was the tale of a young woman who lived in Prague, and about the arrival of the Nazis. It told the story of the Jewish ghetto, of train transports to concentration camps, and of families separated forever by the cruelty of others. It unfolded in a profound way, acted with a simplistic beauty that told the tale with honesty and authenticity and truth and sincerity. And at every turn my eyes stung with unshed tears because I know these were events experienced by millions during that time. I could not hide behind the belief that this was some fictional tale of inhumanity and cruelty and death. This was reality. 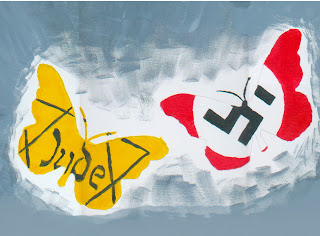 The acting was incredible, every role played brilliantly. I cannot and will not single out any single person as each one deserves great credit for playing such difficult roles so well. You see, this is not an easy story to tell. This is not a comedic romp or some happy-ending fairy tale. Even those who survived Auschwitz and the torment of the Nazis did so with scars, physical and mental, and many with the sense that their only identity was the number tattooed on their arm.

I watched the story unfold with a mixture of mesmerized attention and horror. Horror not at the production, which was beautiful, but horror that this story can be told at all and recognized as something that actually occurred, and in the memories of those still alive to remember it. There are still victims of the Holocaust alive, although soon those last precious souls will die, and we will no longer have anyone who can tell those stories of direct experience. Perhaps that is why plays like this are so important, though. I firmly believe that those who do not remember are doomed to repeat, and so we need to be reminded that these things are not figments of our imagination or some fiction. They happened. They are real. They are true stories, and ones we would do well to recall. 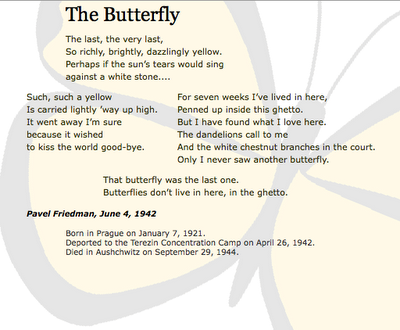 I will not reveal how the play ends, people, because I want you to go see it. I will say there is a sudden ending, a sharp noise that echoes through that theatre space, and that resonated right into my heart. It was that reverberating noise that finally provoked my tears to come, and I left the theatre trying to hide them. I sat outside and collected myself, and I thought about my German heritage. I thought about my family on both sides of that war, and I thought about collective responsibility. I have never even been to Germany and yet I feel the weight of that on me, the thought that the country to which my ancestry is traced was responsible for this atrocity - and how atrocity isn't nearly a strong enough word for all this.

I stayed for the post-play reception, but must admit that my thoughts were too scattered to stay for long. I found myself staring at the set, and taking photos of it. I found my thoughts centred on the theme of the play, and on the final scene. I thought about those German words and how just seeing them had made my heart tighten. I thought about how the past needs to be remembered, and I thought about how a "little school production", so well done and so well presented, can be the reminder this world needs. I left the theatre still thinking about the gates to Auschwitz, butterflies, and my heritage. I left having experienced something that I don't think I will ever forget, and all thanks to a small play lovingly mounted by a few actors on some scaffolding.

My profound and sincere thanks to
Lucy Moore,
Holy Trinity school principal,
for the invitation to the opening night,
and to all the actors in
"I Never Saw Another Butterfly" -
you told a very difficult tale, and
did so in a beautiful and moving way.

There are two more presentations of this production,
June 23rd at 7 pm and June 24th at 2 pm.
Three words for you, Fort Mac.
Go.
And remember. 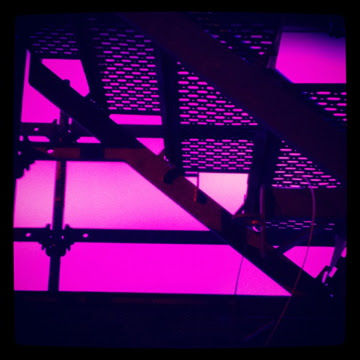