The Tweet Heard 'Round the World - A Cautionary Tale 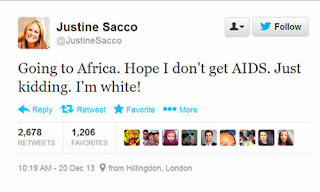 That's all it takes in this world, one tweet retweeted thousands of times, captured in screenshots and sent around the world, and inspiring hashtags like #hasjustinelandedyet that saw tens of thousands of tweets attached (hashtags for the non-Twitter literate are a way to search and group tweets, so having one with over 40,000 tweets is a pretty impressive feat). There was something worrisome about the Twitter pitchfork-and-torch mob that formed after that tweet, and it was an ugly incident in many ways. But the reality is that it did not have to happen at all.

I have written about the perils of social media, and recently I watched aghast as a drama played out on my computer screen. Both the Intrepid Junior Blogger and I were amazed, she just as Twitter-literate as I, as we watched a young PR executive's career and life implode after that one tweet posted just prior to boarding a flight to South Africa and turning off her phone. That one tweet has had incredible ramifications, particularly to the woman who sent it, who now appears to have been fired as well as likely seriously jeopardized in terms of ever working in PR again. And it is all about truly understanding the power of social media, both to do good and to do harm.

I have been witnessing some disturbing trends on social media recently, and many of them far closer to home than the Justine Sacco tweet. There seems to be some sort of pervasive belief that social media is not only the home of "freedom of speech" but the home of the inalienable right of "freedom of consequences from free speech", which are, incidentally, two very different things. I firmly believe that every person has the right and freedom to express their opinion, just as I do almost daily in this blog and on my social media - but I also believe that with that freedom comes responsibility, and consequences.

There is even a local Facebook page with an "everything goes" philosophy, but in recent weeks it has morphed from a page where people bought and sold items to a page where far too often you find overt and covert racism. You find comments and posts that could easily lead to defamation of character lawsuits, and on Christmas Day I was stunned to see people advertising liquor for sale and others defending them with the strategy of "it's just people helping people" (I am sure that the Alberta Gaming and Liquor Commission that regulates licenses for alcohol sales takes a rather dim view of this "helping"). The individuals there truly seem to believe that they can say whatever they want on social media and suffer no consequences, and seem blissfully unaware that employers, police forces, and many others monitor social media. They seem oblivious to those who have been sued for defamation over things said on Facebook and Twitter, and those who have faced investigations for criminal charges based on activities they posted about (eg, the illegal sale of goods). I worry that the page administrators may not realize that precedent law is being set right now, law that could easily deem those who run or administer such pages to be legally responsible for the content on them. And I fear that those who think social media is an "everything goes" medium have miscalculated gravely - because social media means every person who uses it is under the microscope more than ever, and one badly thought out tweet or post can have consequences stretching far beyond what the same thing said in a casual discussion between friends could ever have.

The reality is that every single thing said on social media can be accessed by a wide audience, particularly on Twitter. It is as if everything said there is being said on a stage with millions of potential audience members. Perhaps you think it will only be noticed by a few, or none at all, and perhaps you have said many such things in the past and never had a problem (Justine Sacco had a history of questionable tweets, and I am sure she never thought this most recent one would be the one that killed her career). The reality is though that one tweet or post can move like wildfire, around the world in minutes, and lead to a cascade effect you could likely never predict. Things that you perhaps once would have said to friends over coffee can instead be posted and read moments later in a country across the world.

The things you say have consequences - and far from there being no consequences to social media perhaps the consequences are far greater than ever. The free and easy speech you find there does not mean freedom from responsibility and consequence - it means that you must be more vigilant than ever before about what you say, because it can define you in ways you will never imagine.

What we need to acknowledge is that our social media use comes with responsibility, and we must accept it. If we are going to tweet or post things that are defamatory, racist, illegal, or otherwise questionable we must be cognizant that there may well be unintended consequences, and instead of crying "freedom of speech" we must recognize that every freedom comes with responsibility.  And most of all we must ensure our youth understand this, although at times I think they are far better equipped to deal with this than their parents, growing up as digital natives while their parents struggle to keep up.

Perhaps Justine Sacco, who as a PR professional should have known better, thought that "everything goes" on social media. What she learned is that a few words, less than 140 characters in length, can mean that everything that "goes" is your job, your career, your reputation, and your name, now synonymous with one of the greatest examples of how social media can destroy you. That one tweet should be seen as a cautionary tale for all of us, because while we are so certain it would never happen to us I would venture to guess the young woman in question never thought it would happen to her, either.

I use social media on a daily basis. I am careful with what I say and do in my online presence, but even more than careful I am cognizant of the potential for consequences, and I consider it before I post or tweet or blog. I think about the possible ramifications, and then I decide if I am willing to accept them or not. And then I press the post or tweet button, acknowledging that doing so is fundamentally a contract in which I accept that whatever happens from that point on is something I have chosen. It is something I have learned over time, because I too have seen consequences for things I have said on social media, and I have had to accept my own responsibility. And now every time I hit the "enter" key I pause, and think: "Do I accept all consequences?" - and if the answer is yes I push down. If the answer is no I walk away - just as I imagine one PR professional wishes she had done. Social media is not a free-for-all - far from it. Social media is one of the most powerful tools we have - and it is knife that cuts both ways, sharply and deeply and with a tendency to swing back and cut us deeper than we ever would have predicted. Justine Sacco and the tweet heard 'round the world is a reminder to be very, very careful about how you wield that knife. 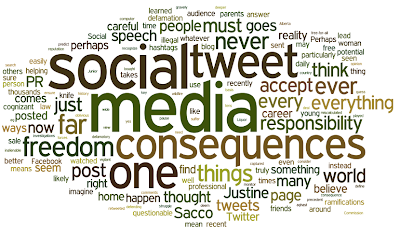