Recently I met someone I have never met before. And when they saw me they didn't comment on my blogs about politics, or the columns I have written about Highway 63. They didn't mention some of my epic moments on Twitter (epic perhaps only in my own mind in retrospect) or the interviews I have done.

No. They said "oh hey, you're the one with that black cat, the famous one from the SPCA! Sirius Black, right?" 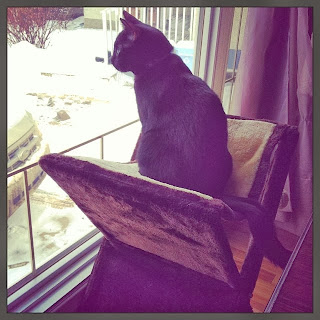 Yes, people, it's official. I am now a well known crazy cat lady with perhaps the most well-known cat in town, having his own Twitter account, several blog posts, and some newspaper columns devoted to his transition from life as a stray tomcat to life as a neutered king of the house. And it seems that little black cat of ours has captured some hearts other than our own, too.

I would love to say that Sir Black, as we call him, is a good cat - but he is not. He is the baddest of the bad, the cat who climbs the drapes at 3 am and then meows to be rescued on learning he is stuck. He is the cat who teases the dog mercilessly, the poor dog quite in love with this plush black creature who eats her food, steals her bed, and plays with her toys. He is the cat who pounces on the ferrets, leaving us scrambling to rescue small creatures of which we can see only frantically scrabbling paws. He is the cat who climbs the Christmas tree again and again, emerging covered in artificial snow. He is the cat who is still determined to escape outdoors and likes to make a mad plunge for freedom when our hands are full. He is the cat who rips open bags of food - dog, cat, ferret, and human - just to see if he likes what is inside. He is the cat who jumps inside every box and bag, empty or filled, and resists being removed. He is the cat who is attempting to quietly remove every ornament from the tree, including several glass balls he shattered chasing them down the stairs (before I smartened up and took off the balls, so now he has moved on to the other ornaments instead). He is the cat who is always hungry, always staring at you, and sees us quite clearly as the people he needs to open the cat food cans. In retrospect he might be great at being a cat, but he is a terrible room mate. 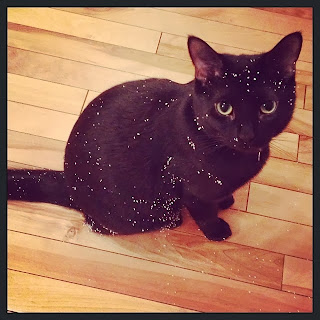 Totally was not in the tree. 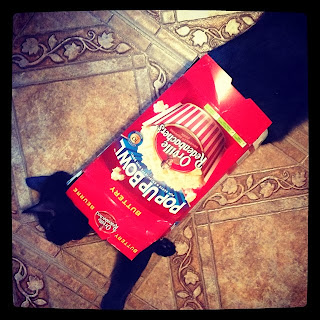 Totally did not get stuck in a box.

And yet how we love him. from the dog to the ferrets to the Intrepid Junior Blogger and I. The way he purrs when we come home (or when we pull out the treat bag and crinkle it). The way he purrs when he sees the dog, who has become his buddy and with whom he will play for hours. The way the ferrets will jump on him, eliciting that pouncing response of his, and yet they do it again and again. The way he curls up with the IJB at night, just a small black furry lump among all the blankets. The way he makes us laugh, even when we find shattered ornaments, shredded food bags, and boxes with teeth and claw marks. And the way he is always there, a small black shadow in our lives, who might not be a big fan of cuddling but who tolerates us and our need for occasionally clutching a small plush cat. Sirius might have become "Fort McMurray Famous" as we call it, but for us he is that little black cat we brought home from the SPCA a few months ago. He is truly most famous in our hearts, I think. 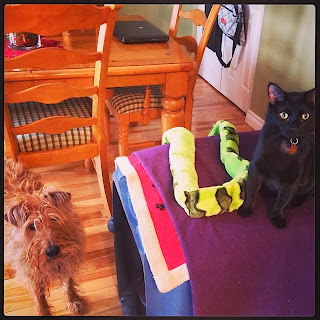 We are watching. Always.

The IJB has always wanted a cat, and while I grew up with them I had forgotten about them and the way they think. I had somehow assumed he would be much like the dog (so laughable in hindsight), easy going and perhaps a bit neurotic. But Sirius has a fully rounded little personality, with moods and attitude, and he has us wrapped around his small black paw - because we forgive his transgressions every single time, and instead of getting upset over broken items we check his paws for injury. We buy him treats and toys, and we are anxiously awaiting delivery of an enormous cat tree that will likely dominate the living room but that we hope to have in time for him to find on Christmas morning when Santa Cat has come (oh man, we truly have lost ourselves in this cat). 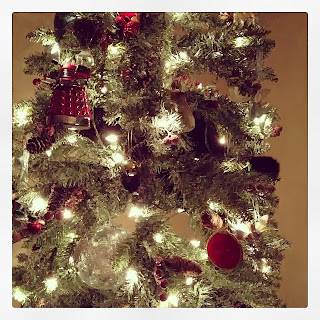 If you look carefully you can see a paw, a tail -
and an eye! 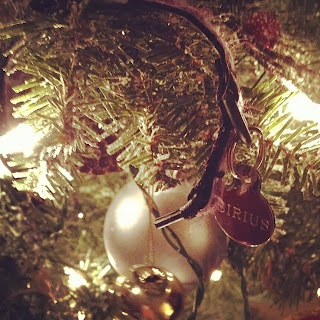 Sometimes this is how we know
he has been in the tree...

This Christmas will be a different one for the IJB and I. Just she and I together are forging new traditions, and coming up with our own plans for our celebrations. We expect it to be a quiet few days, with lots of hot chocolate and pyjamas and time just watching TV. And with us will be our menagerie, three ferrets, one dog, and one small black cat who has completed our family, and found a way to turn us all into cat fans, even an initially skeptical dog.

As I write this he lies beside me, in his nightly post-canned food coma, quietly grooming his paws and purring. And all I can think is how much richer our lives are because of him, and how I never expected that a small black stray cat could so quickly become part of the family - and even a little bit famous too.
This is a little video of Sir Black. I suspect you will soon see how, and why, he became family.