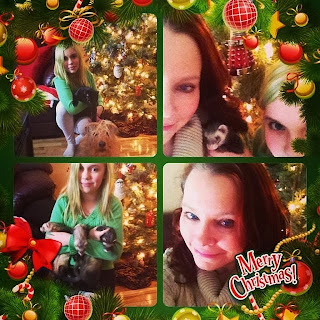 This was a different Christmas for me.

Oh, I know every Christmas is different, but some years bring with them such tremendous change that it impacts every facet of your life, including how you spend your holidays. I was not alone this year in facing a very different Christmas, as I knew several others going through the same thing. For some it was different because they were new in our community, and for some the difference was the tragic loss of a family member, altering their holidays - and their lives - forever. With these changes and losses often comes another loss, the loss of the traditions we hold dear. It can be so hard to lose them, and this year I struggled with it - but I forgot that losing traditions comes with a silver lining. It comes with the opportunity to make new ones.

Growing up I recall so many Christmas Eves spent at the long table my father built, designed to hold a large and growing family. My mom would cook and bake and my dad would pull out his accordion, and late into the night we would sing carols, off-key and out of tune and not caring in the least. At midnight we would all go to midnight mass, and when we returned we would open gifts, no Santa Claus needed in my house where the gifts came instead from each other (yes, I grew up never believing in Santa, and have never felt cheated about it, either). My parents would sing Silent Night in German, and we would go to bed at about 3 or 4 am, crawling out in the morning when we could smell the bacon frying and knowing round two of the Christmas celebration was about to begin.

My parents have now been gone for many, many years. There is no accordion at Christmas Eve, and I have not attended Midnight Mass in a very, very long time. Once, in a hotel a few years ago, some wandering singers sang Silent Night for me in German, making me weep so hard that they worried they had upset me, not understanding that they had evoked memories that went back into the depths of my childhood. Those traditions, though, quietly passed away as my parents did, and slowly I forged new ones with my family.

And this year the Intrepid Junior Blogger and I found ourselves settled into a new life, and we discovered the opportunity to create some new traditions. This year she and I began cooking and baking together, something I never thought we would enjoy but something destined to become tradition for us. Now, she does get a bit Gordon Ramsay-esque in the kitchen, with a lot of "Stir this!", and "Chop that!", and "For the love of god Mom, get off Twitter and check the pasta!", but we created more food and laughter together than we have ever done in the past, from cookies before the big day to Greek pasta salad for Christmas Eve to sweet rolls on Christmas morning. It was the beginning of a new tradition, and suddenly I stopped wishing for the old traditions - because just as people leave our lives so do some of our traditions, making room for new ones that embrace our changes.

We have so many traditions now, you see, and they are changing and growing just as she does. This year she "Stuffed the Bus" at the Santa Claus parade, and I think this will be something she will want to take part in every year, her passion for the food bank and the work they do so strong. I attended many Christmas functions and events, but perhaps the most satisfying moments for me were the simplest ones, ones where I got to see her beginning to explore traditions of her own.

We ended our Christmas Eve watching a movie. I suggested the Christmas standards, but she looked at me and said "New tradition - Monty Python?" - and so we ended the evening with Monty Python and the Holy Grail, a movie we know well, reciting the lines and singing the songs and laughing. We ate homemade pumpkin cheesecake and she asked me to teach her to make it so some day it can become one of her traditions, too. And we spent Christmas morning eating sweet rolls, watching the dog devour a rather large treat, the cat get high on a new catnip mouse, and trying to stuff three small ferrets into three even smaller sweaters and hats. 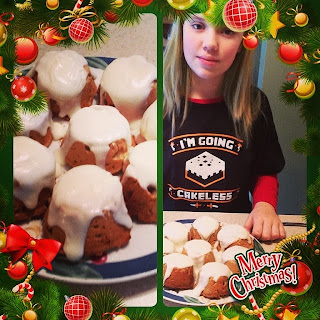 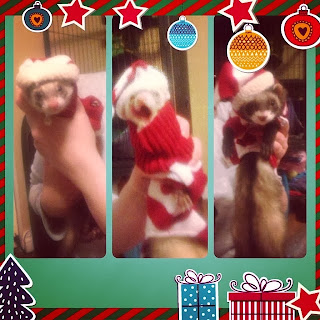 Our traditions have changed. Our lives have changed. I think it is something to not only accept but celebrate, because part of life is change, and how we deal with it. Some changes, like the loss of my parents, left a loss of tradition that is hard to accept but that has become an immutable part of my past, echoes of a time gone by that can never be recaptured but that will never be forgotten. Some day the IJB will move on in her life, and with those changes she will find the need to forge new traditions, and to cope with changes. If I am proud of anything it is perhaps that this year I showed her how it can be done.

Perhaps you forged new traditions this year, too. Or maybe you carried on the ones you have had for years. It doesn't really matter in the end. In the end what matters most is simply knowing that traditions, like lives, change and grow, and that this isn't a bad thing. It is, in the end, just like life - and life is all about forging the new while never forgetting the past.