I stare at it in disbelief. My reliable little car, always so quick to start, sat there like a dead and frozen lump. My plans for the day ruined as instead of an early start at the stores I now faced trying to find someone to boost a very frozen battery, after the umbilical cord connecting my little car to the electricity it needs to warm the battery had somehow come disconnected. It was -37 degrees Celsius according to my iPhone app, closer to -50 with the windchill. I was disappointed in how my day was going south - but more than that I was very worried about something else, something more important than a delayed trip to the grocery store. I was worried about those in our community who sleep rough - outdoors at night in -50.

It is the kind of cold that gets into your bones, and as I get older I find I have a harder and harder time adapting to it. It makes me ache and just a short time outside leaves me trying to warm up for hours, and I think some of that comes with age as the Intrepid Junior Blogger does not seem to have this issue. And that worries even more, because many of our homeless population are my age, or even older. They face these temperatures daily, even sleeping outdoors in them, and I cannot imagine the havoc it wreaks on their bodies.

Added to the cold is that often they have the illnesses that plague us as we age, too. Arthritis, diabetes, weakened eyesight, liver or kidney issues - how does one manage those when one lives on the street, exactly? And how does the extreme cold affect those diseases, and those who suffer from them?

It makes my heart ache. Every night I go home to a cozy little house and put on fluffy pyjamas and cuddle up with the kid and the cat and the dog. Every night I go to sleep in a warm bed, safe not only from harm from those with ill intent but safe from temperatures that freeze cars and skin solid. And every night I struggle with knowing that there are some who sleep outdoors in this, seeking whatever sliver of refuge they can.

Someone posted on Twitter recently about feeling unsafe because homeless people were asleep inside a local ATM lobby. And while I empathize with their fears I have spent a couple of nights pretending to be homeless, and I know that I would sleep in apartment lobbies and staircases and ATM lobbies without a hint of guilt or shame because it is better than freezing to death outdoors. And this is the sad reality. Homeless people freeze to death during this time of year, their fragile bodies finally succumbing to the cold and the diseases they suffer. This tragic end is something I can barely tolerate thinking about, because no one should die because they were literally left out in the cold.

We have made some terrific strides in addressing homelessness, and we have housed many who are now spending their nights indoors and out of the bitter cold. But it is still estimated that over 50 people sleep rough in our community every night - including nights when it is so cold that it is beyond imagination.

I have met them, you see. I have talked to the individuals who sleep rough, the ones who have lived in tents on the Snye for years (some over a decade) and who continue to face extreme cold and all the other hazards of homelessness. I worry about them all, but I worry most about those who are beginning to age, and who I fear will become a sad statistic. I worry most about the ones who I can see aging before my eyes, growing rapidly older as the days and nights take their toll on them, body and soul.

I do what I can. I have been known to quietly drive downtown and cover a sleeping form with a spare blanket. I have dropped off hot drinks. I have given away warm boots and coats, and mittens and toques. I always feel totally inadequate in my response, though, because every night I know that over fifty people go to sleep on our streets. And I know that every single night brings some of them even closer to being one of those who has died there.

This year the Centre of Hope is doing their Sub-Zero Challenge again, this time in an attempt to raise $30,000. This seems like such a modest number given our incredible philanthropy, but this small amount will help to provide warm clothing for the homeless in our community. It might not solve the problem, but it might help them to continue to battle the cold, and survive another winter.

I don't claim to know the solution to homelessness - because it is not a simple problem, and therefore there is no simple solution. All I know is that yesterday when I sat staring at a dead and frozen car my thoughts went immediately to the people in our community who huddle in small lumps at night, trying to stay warm. I thought about times I have seen people walk by them as they lay in the snow, and the times when I have seen someone stop to check if they were ok. And I thought of a time in Toronto when I walked down a street in my neighbourhood and saw a small lump covered by a sheet and surrounded by police officers, waiting for an ambulance to come and take the body away, one of the homeless people I had known and who had apparently succumbed to a heart attack one cold night. I know that as one person I may be able to do little, but that as a group of people we can do a great deal, including donating to the SubZero Challenge and giving our warm clothing to those in need. I may not know much but I know one thing for certain. I know we cannot do nothing, because if we do nothing then we are responsible for the suffering of those in our community who have nothing when many of us have so much. I don't know about anyone else, but that is a cross I cannot bear, and so I will do whatever I can and whenever I can to lessen their burden - and mine. I cannot simply walk by those in need, physically or mentally. And anyone who can may well be frozen, too - just in their heart. 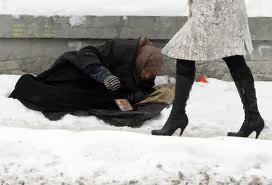