When I realized my holiday in Vancouver conflicted with the date for the very first TEDx in Fort McMurray I was a bit upset. I hate to miss ANYTHING - my mom used to say I didn't sleep because I was afraid something would happen when I was in bed and therefore tried to stay up as late as possible to make sure I didn't miss a thing. But I'd planned to take my husband away to celebrate his birthday, and while I love this blog and Fort McMurray and writing and new events I love a couple things a bit more, like my husband and the Intrepid Junior Bloggers (and, well, the jury is out on whether I love shoes or this blog more, but the blog is slightly more important in the end). So, I needed to find a solution - and thats when I approached my lovely guest blogger @ashcakesquiggle and asked if she would go to TEDx in my place, and as my official representative. I was delighted when my application for her to attend was accepted, and I was thrilled to send her and see it through  her eyes. Sometimes it's nice to sit back and read the thoughts of someone else who attends these events, and I am proud to present her report to you today, people. I hope you enjoy living vicariously through my guest blogger just as much as I do! And, my thanks to @ashcakesquiggle for once again agreeing to "be me" ;)
TEDxYMM and the Fort Mac Famous.
@Ashcakesquiggle back again for yet another McMurray Musings stint.
Before I start on TEDxYMM, I have to tell you about Wednesday, March 28th, and the moment that I truly became the McMurray Musings Protégée.
Wednesday was, as many of you know, the PC Party Luncheon with special guest Allison Redford, Albertas very own Premier. Musings, voluntold me that I should work the registration, and being the good little girl I am, showed up at 9am, after having agonised over what to wear…
Only to be wearing this:

Yes #ymm, We match. From the tops of our heads to the tips of our toes. The hair, the jacket, the dress and stockings and the shiny black shoes.
Anyway! On to TEDxYMM!
DISCLAIMER:
~In order for this blog to be short and sweet, I’ve decided to define each moment with around 140 characters…ish….  since everyone knows how good I am at tweeting by now.~

Ah. This is the moment of truth. Theresa had given me material to study up on in order to get a feeling for the event rather than going in blind. The tweet above is probably indication of how much research I did.
None.
I decided to go in with no expectations. An open mind and an open heart, to devour what our fellow Fort Mac’ers had to say and truly be able to express how it made me feel without any previous bias.
(For those of you wondering I wore a cutesy pink sweater, waist high skirt and belt with black stockings and shiny black heels.)

Our day started early. When I say our, I mean @Toddske (of the Ymmpodcast) and @Steve_Reeve (of Mix1037fmradio) 7:30 is quite an ungodly hour for a lady who works in retail, but I sauntered out to the truck and soon was tucking into Pancakes and Fruit, the start of Awesome Food day as I like to call it, but more on the TEDx catering later.

As quite a few of you noticed, my Twitter name changed to Mini Mac Musings for the duration (and then some) of TEDx, thanks to someone coming up to me at registration and asking if I was “McMurray Musings.” Colour me flattered, but it stuck.
Eventually, as I strolled through the crowd, I had many people (of whom I had never met IRL *In Real Life*) coming up to me and saying “Oh! Ashcakesquiggle! I’ve always wanted to meet you,” or the like.
My favourite of the day was Mayor Melissa asking me where my Red Wig was and that she had been looking forward to seeing it. #followmeforshenanigans. 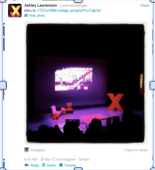 After a short intro video from the makers of TED, @MattYouens, our MC for the Day gave us a Safety Talk and our Hashtag for the day: #TEDxYMM

Malik, of malikmedia.ca started our day off with Chasing Dreams and giving the crowd a laugh with
“Fort McWhatty???”
An expression he used with a Toronto Cab Driver when trying to get some cash together to follow his dream.
And follow he did. Malik is now a world renowned internet power player, streamlining web design into Art, rather than fashion.
Right up after Malik, We had Anas Eljamal, teaching us to Control instincts
Using the Toffler Model, he explained how the 3 types of people work and how they generally don’t work together. They follow their own instincts, differently.
“Don’t try to change habits, knowledge and principles. Change Values.”
One of the speakers that really hit home for me was not physically on stage in front of us, but rather a TED video from Feb 2010, Adora Svitak on ‘What Adults can learn from Kids’ http://www.ted.com/talks/adora_svitak.html
She had a lot to say. This young lady was, in all honesty, probably more intellectual than most of my friends and acquaintances. The one thing that really struck home was the idea that maybe parents are inhibiting children, rather than enabling them.
“Kids need opportunities to lead and succeed.” 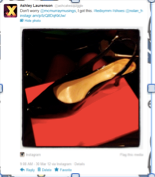 This tweet, obviously just thrown in for fun… To prove that I am truly worthy of the title Mini Mac Musings. A picture of my shoes.

I believe these tweets speak for themselves. Sheldon Germain, Get our swag on and Bring Sexy Back to Fort Mac.
Understand our community to renew our core Values as a city. Survival vs Thrive…al…
“#YMM, the ultimate living experience.”

Couldn’t have said it better myself Russell. 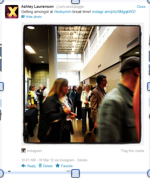 Part One over! Break time had us drinking coffee and posing with the illustrious ‘X’, pics to come.

David Sabine. Agile Transformation, GAMIFY and Network Classrooms, TRUST TEACHERS. Epic backing music, epic person.
Sidenote: David approached me later in the day to let me know he had been following me for a long time. To any normal person, I’m sure this would have come off as creepy, but to someone like me *quote* Twitterholic *unquote* this is a high form of flattery. He said he doesn’t normally follow folks he doesn’t know, but I must have said something intriguing. Ever since our chat, I’ve had to wonder what that was.
“Students teaching each other and learning the way they need to,”
Dance vs. Power point. If you have not seen this TED Talk, I suggest you do so now: http://www.ted.com/talks/john_bohannon_dance_vs_powerpoint_a_modest_proposal.html
“Use artists instead of Power point”  A ‘moving’ (*snickers*) proposal, where we stick it to the man, stop wasting time and start using our creativity to get our ideas across, while also battling unemployment. 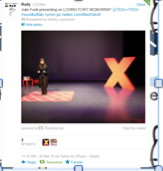 While we are talking about “Moving Proposals”
Julie Funk. Dancer, Actor, Choreographer, Director, Yoga Instructor and Fort McMurray Lover. Expressing herself through the ‘yoking’ of spirit, mind and body, mixed with tender movements, captivated the audience, leaving us all with a feeling of Zen and fulfillment.
“Fort McMurray is Heaven on Earth”
Julie said something that struck me right in the heart though. She described a smell. A smell she never liked, but was described to her as the smell of opportunity and money.
This smell was the first sense of home I ever got in Fort McMurray, the smell of Bitumen.  I grew up living next to a refinery, and so this smell always lingered around home. After having lived in the city for 10 years, the smell left my senses until I came here and was transported right back to my childhood, giving me a sense of home.
Julie also touched on a matter of Fort McMurray being seen as a ‘Bad Place’… Here is her response….
“You think it’s the PLACE that’s the problem?!
…
IT’S THE GLOBAL CONSUMPTION THAT’S THE PROBLEM!”
She ended with:
“If it’s not sincere, it doesn’t matter.”
Think on that, friends. 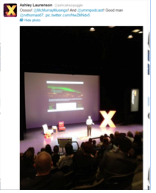 Russell Thomas, I managed to snap your McMurray Musings plug just before you flicked over to the YmmPodcast logo. (I know you’re reading this ;) )
The way time is perceived has changed. Russell proved this with his Social Media Timeline.
“Authenticity matters…… Every voice matters.”
When he mentioned the first coming of Facebook, I was intrigued to see what he had to say. Funnily enough, well before many of my friends, I had Facebook, and was communicating with Canadians on it. Even before I was aware I would be moving out here. (I guess you can classify me as part of the Knowledge wedge on the Toffler Model, Mr. Eljamal.)
Here’s where I will end this section of my TEDxYMM adventure, more to come later in the weeks folks. It’s damn hard to get 8hours into one little blog.
Thanks to @MattYouens for the idea of splitting it into two!
See you next set ;)
at April 04, 2012