When I received an invitation to lunch at Mac Island I was delighted. I like lunch, but even better was the reason for the lunch. The reason, you see, was to sit down with Tim Reid, Mac Island COO, and have a sneak peek at the proposed expansion plans for my beloved recreation centre, plans that have been a long time in the works and are now beginning to really take shape.

I don't use the word "beloved" lightly, people. And in my mind Mac Island has become far more than a "rec centre", too. The MI people like to call it the "heart of the community" and that's true, I think. I think it's not just the heart, it's the beating heart, and, like the story of Doctor Seuss' Grinch, that heart is on the verge of growing much, much larger. Here's the deal, though. What happens, how much it grows, and the future we want to see for Mac Island is up to me - and you.

First I'd like to talk about what I think Mac Island is. You might hear the words "showpiece", "world class development", and, again, "rec centre". It is all those things, but it's more. Mac Island is like a microcosm of our larger community. It has become a meeting place for sports and events. It is the home of our public library. It houses a golf course, our skating club, hockey teams, an amazing aquatic centre, and more - and yet that doesn't encompass all that it is. Mac Island is a fundamental part of who we are, Fort Mac. I think it is perhaps our boldest, most innovative community accomplishment to date. I think it is perhaps the place in this community of which I am most proud. I think just maybe it might be the best symbol of who we are, of the belief we have in our community, and the way we see ourselves. We are not content with a tiny little "rec centre", dark and dingy. We designed and built a facility that astonishes new visitors, and one that residents return to again and again. Mac Island is way, way more than a "rec centre" - and it is on the cusp of becoming even more than that, people.

These are some of the images I saw yesterday at lunch, people. Imagine walking across the Snye from the downtown on a pedestrian foot bridge and seeing this: 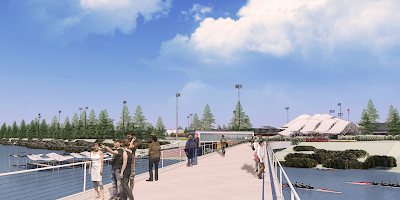 Imagine a free outdoor children's activity area like this: 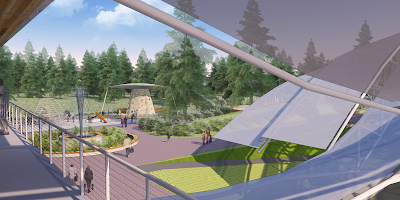 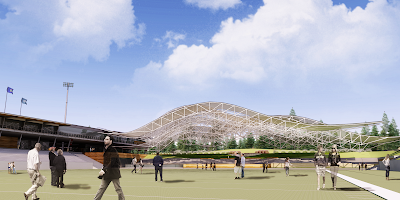 Imagine a stadium capable of holding massive concerts and sporting events like this: 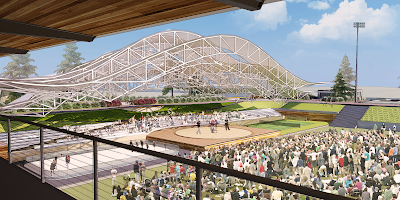 And imagine an iconic structure, symbolizing northern lights, snow, and water, like this: 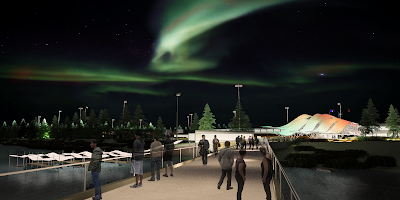 Now imagine that it is 2014, and this exists, in Fort McMurray, at MacDonald Island Park. And imagine why we need this.

You see, we are on the cusp of exponential population growth. All signs, economic and otherwise, point to the reality of this. We are on the verge of a place that was once a remote rural-type town becoming instead an urban-type centre. We are looking at welcoming thousands of new residents. We are becoming something spectacular, I think. And I think Mac Island is on the verge of becoming something spectacular, too.

I know there will be those who look at these plans and think "Oh, but the cost!". And they are right, building this won't be cheap. But sometimes we need to be proactive and look to the future, investing our money where we know it will serve us best. And I think investing it in a truly world-class facility designed to meet not only our current needs but our needs in the decades to come is perhaps the wisest investment we can make. The deal is, though, we get to decide what we want.

Just like buying a car we can go basic, loaded, or extra-loaded. The bare bones expansion? 55 million dollars gets us the basics. The mid-range, some bells and whistles? 83 million. The whole enchilada, including a baseball stadium and marina park? 117 million. And here is what I think, people : Go big, or go home.

Yes, 117 million dollars is a lot of money. Yes, I know there were issues with cost over-runs with the last Mac Island expansion (trust me, I haven't forgotten those, either). The difference is that Mac Island and the RMWB learned from last time, and this time it will be done smart. This time there will be a guaranteed maximum price. This time it will be us controlling our destiny, not destiny controlling us - and really, I think it's about time we do exactly that.

My biggest frustration in this city has been that in the past we have engaged in reactive behaviour. We let destiny happen, and then we reacted to it, often too little and too late. It is only in the past few years that I have begun to see true proactive thinking going on here. We have stopped "letting things happen to us" and started "making things happen for us". And I think just maybe the proposed expansion at Mac Island is the premiere example of this. I think just maybe the choice we make for Mac Island will determine how proactive we are ready to be, how ready we are to embrace our future while acknowledging our past. It's go time, people.

And that's why I think it's time to go big or go home. I think we go for the whole thing, build the entire facility now, spend 117 million dollars, and then rest secure in the knowledge that we are ready for the future. I think we embrace our future, and take the leap into it. But, that's just my opinion - and you have the chance to express yours, too. Mac Island is holding a series of consultations seeking public input before they take their proposal to city council. They are seeking to engage the community - all of you - in making this decision. I have made my voice heard and my opinion clear in this blog, and now you have the opportunity to do the same at a series of open sessions designed to show you the plans and talk about your vision for MacDonald Island Park - and, really, in my mind, your vision for the future of Fort McMurray. I strongly encourage you to go and see the images, as they are breath taking. I encourage you to go and use your imagination and explore your own vision for Mac Island. This is our time to control our destiny, and you have a role in it, people. Don't leave it up to others - express yourself, be heard, and help shape who we become, because we all have a role in it, every single person that calls this place home.

There was one image I saw yesterday that I keep seeing in my mind. MacDonald Island Park, "Canada Rocks Festival", Canada Day, 2014. This can be OUR future, Fort McMurray. It's time to determine our destiny. Together. 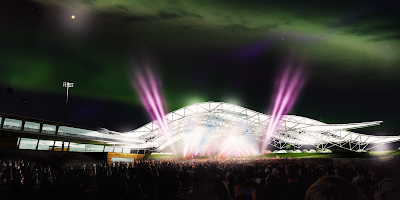 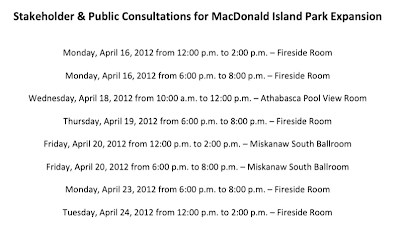