Believing in the Possibilities

I had a blog post planned for today, and it was all about my recent Edmonton Escapade. But something else has been going on in my life lately, and last night it culminated in an event that I think will forever change our community, and the future of our region. I decided I needed to take this blog on a little detour today to talk about that event, and to share some thoughts with you. What was the event? Well, the election of Don Scott and Mike Allen as our new MLAs for the ridings of Fort McMurray-Conklin and Fort-McMurray-Wood Buffalo.

A few weeks ago I was asked to serve as communications manager for Don's campaign. I had met Don last summer at interPLAY. It was only when he sent me a message on Twitter during SummersEnd that Don and I really became friends, though. He sent a message saying he had an extra ticket, and asked if I wanted it. I replied that I was volunteering backstage, but when I went out into the audience during the show I found Don and we chatted. His first words to me were "I can't do much for you, but I can introduce you to people" - and he did. Don has introduced me to hundreds of people, providing me contacts for this blog that I would have otherwise struggled to make. He invited me to events, and he made sure I knew what was going on in the community. And he did it only because he wanted to help me, and his help has made this blog what it has become. So, when asked if I would work on his campaign I was not only happy to do so I was excited and honoured to be given the opportunity.

And people, what a time it has been! I will be very honest and tell you that there are people who worked far harder on Don's campaign than I did. The guys out putting up signs, the people out knocking on doors, his campaign manager - they all worked their butts off while I was often curled up with my laptop knocking out press releases and content for brochures. My contribution to the campaign seems quite small compared to that of others, but I am proud to have been able to do it. And not just because I consider Don a friend. It's because I believe that Don, and Mike, are what we need in this community.

This region is at a critical phase in my opinion. We are on the cusp of something amazing, the leap from rural to urban, the leap from reactive to proactive thinking. The only way to achieve what I think is possible, though, is to have the kind of bold, visionary, effective leadership that can make it happen - and people, we just elected it last night.

We now have two strong voices in government. And we have a premier that I firmly believe has a passion and vision for this province, and I saw it first hand when I had the chance to interview her recently. And in Don and Mike and Alison I think we have three leaders who truly understand who Fort McMurray is, what this region needs, and who will fight to make sure we get it. I think we have just determined the future, and we have done so by electing people who will take us into that future. They will provide the leadership we need, and they will do what needs to be done.

Yesterday was a nerve wracking day for me. Last night I was locked in one of the polling stations as a scrutineer so I had no idea of the results, being unable to use my cell phone. When I turned it back on and received a call from my husband congratulating me it was the first news I had of what had happened in this province. And I admit it. I danced, I jumped up and down, and I shouted.

And then last night I went to MacDonald Island for a little party. It was a little party that turned into a victory celebration, and it was a little party where I not only celebrated, but I cried. I took the Intrepid Junior Bloggers into a corner and I wept as I released some of the stress from the past month, and I cried tears of happiness, too. Happiness for my friend Don, happiness for my friend Mike, and happiness for all of us in a region with such a bright, bright future. Until that moment I don't think even I knew how heavily invested I was personally in all this, but as I cried, the arms of my girls wrapped around me, I finally realized that, too.

It has been an incredible journey, people. I have had the pleasure of taking it with so many people, all those from Don's campaign team, and Mike's team, too. I have had the honour of being part of the ride, and as I said all along I would be proud to have done so regardless of outcome - and I would have been. The fact that the outcome is just as I hoped it would be, and just as I think the future of this region needs, simply makes me that much happier.

I woke this morning and saw the dreary snow. I saw that winter hadn't left us yet, and any other morning I probably would have growled. But not this morning. This morning all I saw was perhaps the most beautiful morning in Fort McMurray I've ever seen. Last night Sharon Clarkson, former Fort Mac city councillor, made a speech in which she shared she has recently been in Disney, but that Disney isn't the most magical place in the world - it's right here in Fort McMurray. Fort McMurray is where dreams can come true, and last night I saw the realization of many dreams, for individuals, and, I think, for our community. And for this little blogger, well, she saw the result of the hard work of many people, and the shape of our future. She saw once again what can happen in this place we call home. She saw democracy in action, and she saw this: 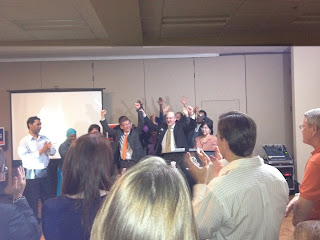 And she smiled. And she is still smiling today, people, although she seems to be on the verge of tears on occasion, too. Because I think we all have a great deal to smile about, this entire community. Because I think despite the dreary weather today the sun is shining down on us, and it will shine on us for years to come as we move into the future with new leaders, a new vision, and a renewed belief in ourselves - and the possibilities. It's a day for smiles, and happy tears, and believing in the possibilities.

I want to thank EVERYONE on
Team Don Scott
and
Team Mike Allen
for simply being amazing!

I want to thank all those
who put their names on those ballots,
regardless of party affiliation.
I know now how brave a step that is,
and the hard work it involves.

I want to thank all those
who voted, who took the time
to learn about the issues, and who
care about the future of this community -
regardless of where you placed your X you
showed you care enough to have a voice!

Finally, I want to thank
the Intrepid Junior Bloggers
and
my husband
who took this journey with me every day,
supported me, and made it possible for me
to do this at all.
And yes, eventually I will do the laundry
that hasn't been done in weeks
and clean the disaster we call our house.
Just not today ;)