All Candidates Debate in Fort McMurray 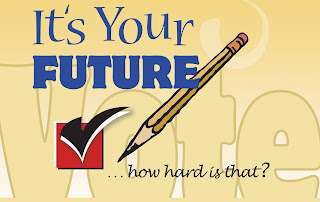 Well, people, this has been an interesting few weeks for me. As I've written previously I agreed to serve as communications manager for Don Scott, our local Progressive Conservative candidate for Fort McMurray-Conklin. I was delighted when I was asked as I have come to know Don well over the last year, and I came to know his commitment and vision for our community. I knew that I wanted to see Don represent us in legislature, and that he would do it well. Since beginning this volunteer role I've learned a great deal about campaigns and politics, far more than I ever knew before (including the importance of helium balloons, a part of politics I knew nothing about, and I had never understood the pivotal role they play until I spent hours tying balloons for the Premier's Luncheon). I was looking forward to one thing in particular, though - the Candidate's Debate.

I was a debater in high school, people. Yes, that's right, I was a bit geeky, what with Model United Nations and debate and all those decidely non-sporting type activities. I love nothing more than a feisty debate, a good argument based on facts and logic, a good show of intellect and skill with words. I enjoy watching a good debate, too, seeing how skilled opponents can play and deflect off each other, scoring points with words alone. And that's why I looked forward to the debate last night, although in the end it wasn't all that feisty. I think, though, for those in attendance it made the positions of our local candidates quite clear - and it crystallized for me why I am working on Don's campaign. I want to make something clear about the remainder of this post, though - this is all my opinion. I'm not presenting this as fact, and I am not telling you who to vote for. I am, however, going to tell you MY truth, which is kind of what I always try to do, and you can like it, hate it, or decide to never read this blog again. Your choice, people. And here we go...

The first debate was between Don Scott, the PC candidate, Doug Faulkner, the Wild Rose candidate, and Paul Pomerleau, the NDP candidate. Now, let me make this clear - Paul seems like a nice guy, but being an NDP in Alberta, and especially in this part of the province, is like being an oceanic fish in Saskatchewan. You are not only out of water you are pretty much out of luck, but I have mad respect for him choosing to put his name forward. That's true democracy, people - putting yourself out there even when you know it's pretty much a lost cause.

I could go into a lot of details about this debate but as I have said before I'm not into the political nuances. I look at how people say what they say, and the way they say it. I look at their faces, and I gauge their reactions. What I saw last night in the first debate was one candidate who came prepared, one who came prepared but is an oceanic fish in a desert, and one who seemed a bit lost.

Don spoke clearly, and was concise in his knowledge of PC party policies. His knowledge of local issues was clear, and his understanding of the community obvious. I saw once again his shining commitment to serving this community well, and I saw sincerity. I know people may doubt my credibility in this as he is also my friend, but here's the thing, people - I don't have much time for insincere people. I have met other politicians and I would not work on their campaigns because they don't seem sincere to me, and I suspect their motives. But I know Don's sincerity, and it is authentic. He is the real deal, and it was very apparent last night.

Paul spoke well, too, and seems well versed in the local issues and concerns. The thing is that the NDP don't stand a chance in hell of forming government, and while personally I lean left I'm also terribly pragmatic. I want us to have a representative who can exert some power from inside government, and an NDP candidate just isn't it. Again, I have total respect for Paul for even running, and I was interested to hear his ideas.

And that brings us to Doug Faulkner, former mayor of our community. I suspect Doug is a nice man, although I don't know him. I suspect he means well. But Doug left Fort Mac several years ago, and it shows - because I don't think he is current on our issues or concerns. I think he still sees Fort Mac and Alberta as it was years ago, not as it is now. And we don't need leadership from the past, people - we need leadership who knows who we are now, and who has a vision for our future. I was a bit troubled when he was thrown by a question about the mountain pine beetle - obscure, yes, but a real issue in our province, not just in BC (his comment about that question was that it made him think he was in BC, and that he didn't expect these kinds of questions). He kept saying "he believes" the Wild Rose has policies regarding certain issues, which also worried me. I don't want to "believe" they have policies, I want to hear them. I want to hear about our future. And that's the problem right there, people - in my opinion Doug Faulkner represents our past. I think Don Scott represents our future, and I think he made that abundantly clear last night.

Articulate, intelligent, coherent, and with a clear vision for our future, I truly believe Don represents our best chance for strong leadership in Edmonton. Listening last night reminded me why I agreed to work on Don's campaign, and I'll admit it - I am proud as hell to be doing it, too (and completely unapologetic, so don't bother with the hate comments and emails, people).

And on to the second debate, one which at least two candidates bothered to show up for - Mike Allen, PC candidate, and Guy Boutilier, Wild Rose candidate. The NDP and Liberal candidates? No shows, not a surprise, but disappointing all the same. And the deal is I would never put my "x" next to a name that didn't bother to show up for this kind of forum because frankly I think it's disrespectful to voters, but that's my opinion.

I think everyone was expecting this debate to be a little more heated, and I think it was. Look, here is the reality, people. This is likely the first time our incumbent has ever had to really fight for his political life. He has always sort of had it in the bag, but not this time. This time it's a real horse race, a race noted to be "one to watch" by political wonks. Mike represents a real challenge to Guy, and that was clear last night.

Guy is a showman, a bit flamboyant, and Mike is poised and calm. Both know their party policies well, and can share them in an articulate and precise manner. Both are well meaning, both care about this community, and both have a lot at stake here. There was one moment I found troubling, though, and it said a lot to me.

A question was asked about what each candidate could say about the other that was positive. It was the kind of question that elicited laughs but also a sharp intake of breath. It is the kind of moment that can be very telling, and it wasn't a political question - it spoke to character.

Mike answered first. He was magnanimous and generous, and he commended Guy on his years of service to this community, as mayor and MLA. He spoke of the contributions Guy had made, and he spoke of the difficulty of political life and his respect for those who take on that role, often at some personal cost. I thought it a lovely answer, and it reflected well on the man I have come to know.

Then Guy answered. He didn't talk about Mike's role as a city councillor, and his service to the community in that role, or his devotion to our community in other ways. He called Mike a "good musician", talked about Mike's business (Campbell's Music), and commented that he wished Mike the best in that continued musical endeavour, a comment that elicited laughs - and that was it. I won't tell you my reaction to that except to say I was disappointed. And I will leave you to determine for yourself how each comment speaks to the character of the individual who spoke it.

A lot of people are going to ask who I think "won" these debates. And you know what? I'm not going to determine an individual winner - because I hope it's Fort McMurray that wins, people. I hope we finally see the kind of voter turnout we should see here, not the pathetic turnout it has been in the past. I hope we get the representation we deserve and desperately need. I hope we put our "x"s beside the names we truly believe will be our best leaders, and I hope we elect the people we want to be in charge of our future.

I have never in this blog told you how to vote, and I am not starting today. I have been very honest about where my loyalties lie, and I know I take a risk in doing so. In the end I know where my "x" will be placed, and in the end I know where I would like to see the future take us in this community. The choice, though, is up all of us, people. In the end all I really care about is seeing people get out there and vote on April 23rd, even if their vote cancels mine. Even if they spoil their ballot. Even if they write in the name of their dog or their favourite super hero. Because at least it means they care enough to go to the polls. Because at least it means they care about this community, and that is one thing I do believe every single candidate at the debate last night truly does. I think we are divided by a few things - ideology, political party, etc - but I think in the end we all care about Fort McMurray. I suppose, in the very end, that's all that really matters, people. Now, get the hell out there and vote on April 23rd, would you? Show that you care, too. 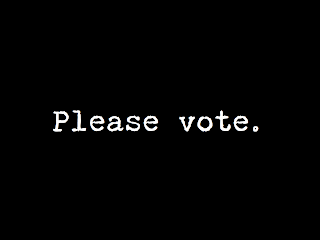