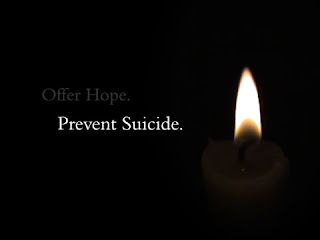 I never knew him. He was gone decades before I was born, in a manner that was cloaked in mystery when I was a child. When I asked my mother once all she said was that she believed his death certificate said he had died in a farming accident, and didn't want to discuss it further. I knew from the way she said it that he had not died in the way his death certificate noted. Finally, after my mother died and the truth could no longer hurt her I asked my older sisters, and they revealed the truth. He had committed suicide, although the details are unclear. He was my mother's father, my grandfather, and my understanding is that he hung himself in the family barn after the sudden death of his wife, my maternal grandmother. My mother was left an orphan, having lost both her parents in short order, and she went on to help raise some of her younger siblings. It was an experience that I believe forever altered her life - and her.

Today is World Suicide Prevention Day, a day dedicated to ending suicide and opening the dialogue about a topic that is often too painful to discuss. And one of the things we must discuss is the stigma surrounding suicide, both the contemplation of it and the actual act. That is why I have shared the story of my grandfather, a story I have never before revealed - because it is true, and because suicide touched my life before I was even born, having an impact on my mother that can never be measured but that was certainly very, very real.

I suspect most of us have been touched by suicide. Perhaps we have had friends or family members who have thought about it, attempted it, or even succeeded. Perhaps we have considered it ourselves. Perhaps we have travelled through our own dark valleys. And yet how often do we talk about it? How often do we discuss it? Virtually never, until it has been attempted or it has happened - and so the stigma continues, a stigma that in decades gone by meant death certificates were altered to change reality.

The reality is that suicide remains an issue, even right here in our community. We can turn a blind eye to it, hope it goes away, pretend it doesn't exist - but it does, and it will not go away until we confront it. It will not go away until we open the door and discuss it. It is the monster that hides under the bed and in the closet, except this lurking monster is real. And it steals people we love.

There is hope, though, and there is help. Locally we have an organization called SOS - or Some Other Solutions. One of the things they do is work on suicide awareness and prevention, and they work to remove a stigma that continues to keep suicide shrouded in secrecy. And there are resources out there to help those who are contemplating or have contemplated suicide, and those with family members and/or friends who have. One only needs to reach out to find them, but reaching out requires one thing - an acknowledgement that suicide is an issue, that it exists, and that the stigma it carries doesn't make it go away - it just hides it, like a death certificate listing a false cause of death hides a painful reality.

The reality is that no matter what my grandfather's death certificate read the truth is that he took his own life. No one will ever know why, because he is not here to explain, and while we can speculate we have no real answers. There are many questions and uncertainties, but what I do know is that his death impacted my mother, and me, and my sisters, and all our children. The legacy of his suicide has left a mark on my family, a remarkable thing to note given he died in the 1940's and at a time when suicide was even more deeply cloaked than now. He has never been anything more to me than a faded photo in the album I inherited when my mother died and I became the archivist of the history of my family, and I will never know the entire story, because it is shrouded in mystery. But knowing that tiny bit of family history has left me with something - a realization that suicide is, and always has been, real, and that it impacts those touched by it in profound and long-lasting ways, ways that last for decades and become part of the fabric of their existence.

My grandfather committed suicide. I never had the chance to know him. He chose to end his life, and while I never discussed his death with my mother I have discussed it with the Intrepid Junior Blogger, because in my family the stigma ends now. The IJB, at fourteen, is in an age group where her life may well be touched by suicide, and I will not allow her to navigate this territory on her own. We have open and frank discussions about mental health, and about suicide, and she has adopted my saying that suicide is a long-term solution to short-term problems. She will never wonder about that family history, because in her world it is not a secret. She will be far better equipped than I when it comes to this issue because I have helped her to strip away the stigma and reveal the reality, and to see that suicide is not something we should hide or pretend doesn't exist. You see I taught my daughter that when we think there are monsters in the closet we don't close the door - we shine a flashlight in, and coax them out into the daylight. We shine a light on the monsters, and we find a way to combat them - and we never let them hide in the closet again. 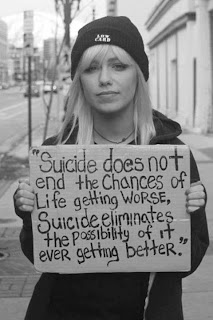