Our Lady Peace, the Intrepid Junior Blogger, and Magic in McMurray 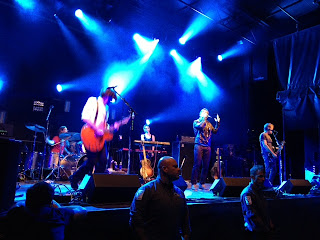 There are times in this life when you wish you could preserve a moment forever, capture it somehow in a way that you will be able to transport yourself back to it whenever you feel the need. There is no way to do this, of course, except in our memories, and for me one of those moments and memories occurred last night, a cool evening in Fort McMurray, in front of an outdoor stage and under a gorgeous half moon that lit up the sky.

Yesterday was the Intrepid Junior Blogger's fourteenth birthday. I remember her first birthday here, when she turned three. We had just moved from our home in northwestern Ontario, and had been here mere weeks, knowing few people and celebrating on our own with our little girl. Things have changed since then, and last night we celebrated her birthday with hundreds of other people as we stood on an outdoor field at MacDonald Island Park to take in a performance from Canadian band, and icons, Our Lady Peace.

One of the things she and I love to do is attend concerts together. We have seen Down With Webster twice, Hedley, Sum 41, and Billy Talent. And while I don't object to travelling to see concerts there is something wonderful about being able to do it right here, in our own backyard, and so, whenever a band comes to town that I think she will enjoy, we go.

Last night we were there right at the front rail when opening band Siiines took the stage. An act from Edmonton they were a tight little trio, and the IJB quite liked their distinctive sound. The real magic began, though, as the sun began to drop below the horizon, a cool breeze filled the air, and Our Lady Peace took the stage.

From the very beginning they had our rapt attention. The IJB was as close to the rail as possible, and asked me to hug her to keep her warm - and so that is how we watched an amazing show, with her huddled against the rail and me holding her from behind, her small but ever growing body tucked against mine. She rested her chin on my arms, and I rested my head on her soft once-blue and now green hair, and we cheered and sang along and watched as a kind of magic unfolded before us - and around us.

You see there are moments, too, when things come together in a way you cannot predict. The crowd, of so many different ages, joined with the band to sing some of their classic songs. At times Raine Maida, the lead singer, would stop singing entirely and simply let the audience carry the song, and while at some concerts this is a gesture that falls flat in this case it was incredible to witness the way the audience owned the songs, singing them back at the stage with such strength. The crowd swayed and danced, sang and cheered. And up above flew a small remote controlled UFO type toy, obviously brought along to entrance the crowd, a highly effective tool given the deepening dark night.

At one point, just prior to a song entitled "Paper Moon", Maida commented on the moon last night, a half-moon that shone a strong bright light on the crowd gathered below. And then, when he commented that there was an amazing energy in this little town I felt chills when the crowd began to chant "Fort McMurray" around me, a show of solidarity and strength in a little town that far too often finds itself on the defensive. It was a moment of pure magic, because those chanting were adults and kids, people of all kinds and all sorts - the very community that we all know lives here, plays here, works here, and calls "here" home. 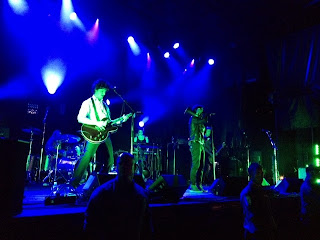 My own personal magic came at a moment close to the end of the show. The IJB, tucked up against me, pulled me even closer to her, and in that flash of a second I realized that soon, far too soon, these days will be distant memories. Today she is fourteen, and in a few short years she will go off to university (and I know she will, as her plans include study, and hopefully a life, overseas) and these moments will be lost to me forever. I held her closer and listened as Our Lady Peace sang of life and love, and connected with a community hungry for the kind of connection they brought to the stage. And I held onto my little girl, now a young woman, but for a few hours at a concert completely mine to treasure before I had to let her go again and off into the world that will one day claim her, because the world will need her and her strength and intelligence just as much, or even more, than I do. 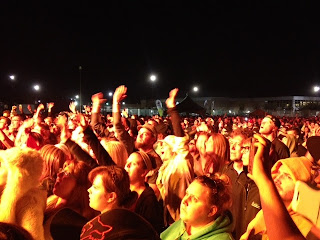 After the final notes rang out we began to walk away from the field, our ears still ringing and our hands cold. She held my hand, this girl-becoming-a-woman, and said "Do you think Neil Young was an idiot for saying what he said about Fort McMurray?". I looked at her and told her that he was not an idiot, but that he only saw what he wanted to see, and that he only looked at the things that would confirm what he already thought about us. She shook her head, and said "Not an idiot, I guess. Just blind", and I think she came so close to a simple and beautiful accuracy about that whole incident that I could say nothing more. We went home then, the Intrepid Junior Blogger and I, after another night in our community spent at a concert but also spent finding something so much more. I feel sorry for those who missed Our Lady Peace last night, because you see they didn't miss a concert. They missed magic, a magic that unfolded on an outdoor stage with a beautiful boreal forest backdrop. They missed one of those moments you wish you could capture forever. And for me, I have - both in my memory, and in this blog, recorded forever as a birthday present for the reason I do everything - my daughter, Sam. Happy birthday, Intrepid Junior Blogger. The best day of my life has been every day since you were born, fourteen years ago. 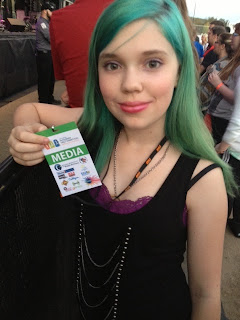