In All Sirus-ness - Welcoming A New Family Member 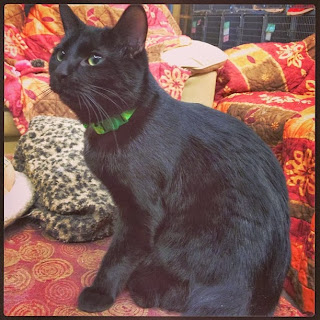 To be very honest he wasn’t even our first choice. We had our eye on a flashy orange and white one, with long fur and a motorboat-purr. The flashy one had caught our eye, but this other one – a rather non-descript black cat with a couple small patches of white fur – didn’t seem all that unusual. He had made himself known when the Intrepid Junior Blogger felt a small nose poke her in the leg, and when she bent down he had crept into her lap and curled up, batting away other cats with his paw when they got too close. We decided, though, to apply to adopt the other one, the flashy cat, but when our application was submitted it turned out someone else had already asked for him – and so we had a heart to heart about our second choice, a small black cat.
And this is how our new feline, formerly a resident at the Fort McMurray SPCA, joined our house two weeks ago. It has in fact been exactly two weeks since we brought home our “second choice”, and we quickly learned that he was instead clearly Number One, not only in his own little feline mind but in our hearts as he has moved in and taken over.


The IJB has always loved cats, but until this year she could not have one. When we moved recently into a new home I promised her a cat (this in addition to a resident dog and three ferrets), and she made the decision that we would adopt a cat. And we wanted a cat, not a kitten, as while kittens are sweet and adorable we truly thought an adult would fit into our house better, and we were right. I don’t think we fully anticipated, though, how this cat would come in and quickly establish rulership of our house. 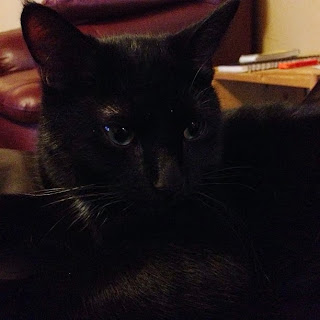 When we went to the SPCA to pick him up we realized that he is a remarkably handsome cat, with plush black fur and a jet black nose. He is on the small side, but solid (with a tendency towards chubby, we can already tell). And he is an incredibly placid animal, as we brought him home and opened his carrier, expecting an explosion of frantic cat or hiding in a corner. This cat, though? No, he strolled out, and within minutes he had used his litterbox, found his food and water bowls, and laid down on the floor in contentment. He purred nonstop for the first couple of days, I think working to endear himself to us before the real antics began and we wondered about our sanity for adopting this little black ball of fur that seems to create an amazing amount of trouble.
The cat settled in quickly, and has established a relationship with the ferrets. This relationship consists of the ferrets chasing him (it appears they think he is a large ferret) and him running away, returning quickly as he finds them absolutely fascinating. They seem to get along, although the cat seems to find the ferrets a bit freaky, and I suspect he thinks they are overgrown mice with large teeth they use to nip his paws when he walks on top of their cage.


His relationship with the dog, however, is a bit more tenuous, and seems to be based on tormenting the dog at every opportunity. The dog, who is a friendly sort but not all that clever, is stunned there is a cat in the house, and will bark whenever she sees the cat (she seems to forget from time to time that he has moved in – as I said she isn’t all that clever). The cat seems to enjoy this and will place himself just out of reach of the dog – on a counter, perhaps, or behind a gate we use to keep them apart – and taunt the dog. And when the dog is safely secured in her crate for the night the cat enjoys lying on top of the crate, draped across it while the dog whines, and eating the leftovers from the dog food bowl, which is in full view of said poor canine, who watches in horror as her leftover supper disappears into her nemesis. 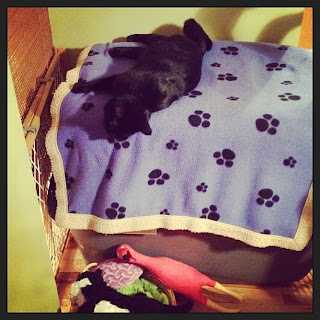 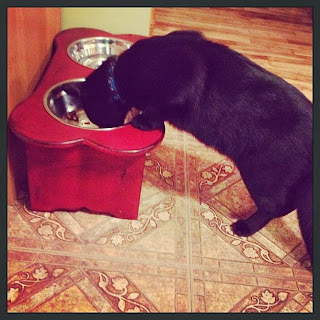 The IJB and the cat have bonded in a way that can only be described as spectacular. For the first few days he followed her around the house, and even now they are usually together. He is a companionable sort, hanging out on the side of the tub when we dyed her hair (blue again, of course), and sleeping with her at night, curled up at the foot of the bed and purring like mad. Last night we had some frantic moments when we could not find him, as he did not come running when we shook the kitty treat bag (I don’t know what is in those things but normally if you shake the bag he comes running and if you don’t cough up a treat he will mug you like a crack addict looking for a fix – both the IJB and I have some small bite wounds from when we didn’t pony up with the kitty treat quickly enough). We searched high and low, the IJB almost in tears as she was convinced I had accidentally let him outside (he is an indoor cat but is convinced he should be an outdoor cat, hence his shiny silver tag and handsome collar as he also fancies himself Houdini and plots his escape). Finally I opened a closet door and out strolled a very sleepy black cat, who was quickly scooped up by the IJB as she flounced away decrying my failures as a responsible cat owner (well, really, how was I to know he would disappear into the closet like that?!?). 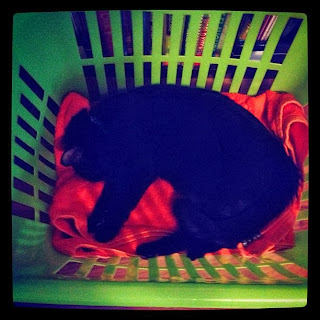 And the cat and I? Well, I’d forgotten how I love cats. You see I grew up with them, always owning a cat until I left home and married someone with a serious cat allergy. I hadn’t owned one as an adult, and I hadn’t realized how I missed them. I love the dog, despite her lack of smarts, and I adore the ferrets as they are amusing and clever. The cat, though, has stolen my heart with his sense of humour and penchant for naughty behaviour. I am both appalled and amused at his jerky attitude (or “catitude”) with the dog, and every morning when I wake up, far earlier than the IJB, a small black cat now appears to keep me company. He doesn’t really like to sit on laps, but he will curl up next to me or on a chair close to me, and when I leave the room he will follow behind me, with a soft meow and an insistence on knowing what I am up to. 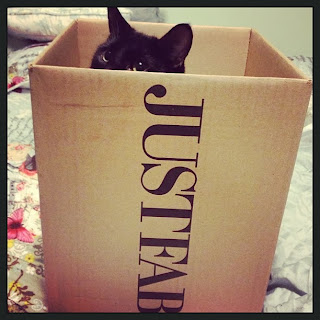 So you see our second choice cat has become first in our hearts. He is clearly not perfect, and his antics have caused some loss of sleep when he decides to play until midnight and then meow us awake at 5 am, and his brief disappearance last night shaved a year off my life span. But it is in his imperfection that we find his true joy, because the IJB and the dog and the ferrets and I? We are far from perfect, but we are, I would say, interesting, and the cat fits right into our somewhat crazy household of personalities. This little kitty, adopted from the Fort McMurray SPCA and now ours forever, has quite clearly established himself as ruler of the house, and of our hearts (well, the dog isn’t won over yet, but I think even she will eventually cave when she realizes the cat can open cupboards and get into treats). Oh, and his name? Well, we named him after a favourite character in a book and movie series, and his seriously black fur – and so he became Sirius Black. Our little Sirius Black, in all his catitude and independence and antics, is now one of us, and I think in a way has always been, from the moment he climbed into the IJB’s lap at the SPCA. He always knew it – it just took us a little longer to figure it out, but I will be forever grateful we did.


You can follow the antics of Sirius Black
on Twitter @sirblacktweets -
And please, please, please
if you are considering a pet
I implore you to visit the Fort McMurray SPCA
and adopt, don’t shop –
you never know what you will find –
or, even better, what will find you,
curl up in your lap,
and claim your heart forever. 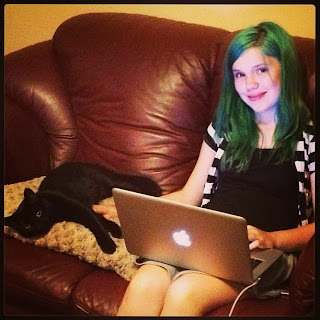