Here Be A Dragon - An Encounter with Arlene Dickinson 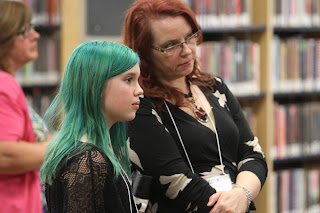 Photo credit to Layla Underwood of LuLu Photography
I am standing back a bit, and I don’t even realize until I exhale that I have been holding my breath. She has just leaned in to hug my daughter to her, touching strands of my daughter’s once-blue and now faded to green hair. She has looked into my daughter’s eyes, and I am so immaterial that I could not even be in the room, which is just how it should be when you meet an idol who far surpasses what you thought they would ever be. “She” is Arlene Dickinson, and she has just established a connection with my daughter that almost brings me to tears even as I write about it.


When I learned Arlene was coming to Fort McMurray as part of the Northern Insights speaker series I was excited, of course. Through this series I have now met Malcolm Gladwell and Bill Cosby, and the Intrepid Junior Blogger has accompanied me to see every speaker. This time, however, was the first time I asked if the IJB could come along to the media meet and greet event – as the IJB idolizes Arlene.
The IJB has been watching Dragon’s Den for years, loving every minute of a television show that captures the spirit of innovation, success, and, yes, even failure. She will in fact seek the show out, flipping to it of her own volition, and her favourite individual on the show has always been Arlene.


She has loved the white streak in Arlene’s hair, and her sassy persona. She has commented that I am a bit like Arlene, with a temper that flares rarely but when it does in a feisty red-headed fashion. She has loved Arlene’s fearlessness, and her courage in facing down the other dragons. She has been a fan, and I have encouraged it because in this world of twerking and sexting I want the almost-14 IJB to aspire to something more.
Last night when we arrived she was nervous, and she stood silently as the media peppered Arlene with questions. When the opportunity arose I asked a question about celebrity and notoriety, and what advice she would give to young women seeking success. She looked directly at the IJB when she replied, talking about the importance of controlling your presence on social media (and how what you put out there can haunt you years later), and then she said – twice – that the IJB is beautiful. And the IJB lit up.


After the media scrum I ushered the IJB over for what I thought would be a quick introduction and a hello. I did not – could not have – anticipated the conversation that followed, one that may well affect the trajectory of my daughter’s life. Her idol told the IJB that she has charisma, a noticeable aura around her, and that you can tell from her face her intelligence. She asked insightful questions about what my daughter wants to do in the future (questions I answered as I could see from the look in my daughter’s eyes that she was struck speechless for a moment). She asked if the IJB had considered a career in fashion, asking if my daughter did her own “styling”, taking in the skirt, lace top, combat boots, and coloured hair. She told my daughter she loved that she was so independent, and that as she knew she was a leader that she must be careful where she leads, as others will follow. And then, she leaned close to her and said “I know that you will be tremendously successful. Don’t forget I said that, because one day I expect I will read about you and your accomplishments” – and then our time was over, and we walked out of one of the most astonishing encounters I have ever had the honour to witness.
When we heard Arlene speak a few minutes later we heard her personal story of a life of struggle, and perseverance. She spoke about how her parents divorced when she was 13, how she sailed through school without trying, how she was a loner often off in a corner with a book – and the IJB looked at me and said “How can she be so much like me?”. I shook my head, because she is just like the IJB in so many ways.


And yet Arlene is just like me, too. She spoke about the fallacy of the “work life balance”, and how life is messy and balance is a personal measurement. She spoke about work being her life and life being her work, and of course I feel the same, as I immerse myself in my work, whether my writing for this blog or for profit, or my much treasured paid position as a communications professional. She spoke about the lost art of storytelling, an art I am trying to preserve in this blog and in my life, the art of simply telling stories of our lives and our past and the lives and pasts of others. She spoke from the heart, and she quite completely blew me away with her candid approach to life.
The IJB was transfixed for the entire talk, occasionally glancing at me as Arlene said things that resonated with her. She would nod when Arlene spoke about her children and her relationship with them, and would look at me when Arlene spoke about how everything she has done has been because of her children – because the IJB knows I do everything I do because of her. My goal in this world is to make it a better place because I was here – because I want it to be better for my daughter.


When Arlene finished we stood to applaud, and then we filed out with the crowd, walking out to our car. The Intrepid Junior Blogger looked at me and said “Some day I would like to have coffee with Arlene. And I hate coffee, but for that I would drink coffee.” She looked at me with a smile that can only come when you have experienced something far beyond your expectations, and when you have found a person who, even though they just met you, has seen who you are and who you will be. And I found myself fighting back tears, because everything I do I do for my daughter – and sometimes it even works out to be far, far more than I ever imagined.
My deep and sincere thanks
to the Fort McMurray Public Library
for presenting the
Northern Insights Series
and giving us the opportunity to meet a dragon,
and to
Arlene Dickinson,

a dragon of the very best kind. 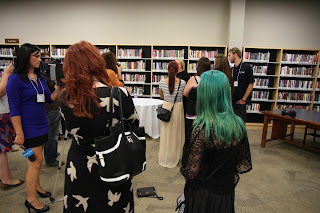 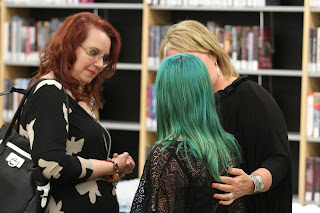 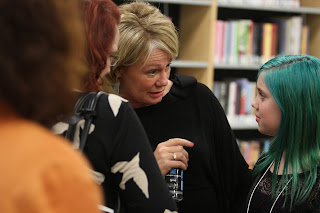 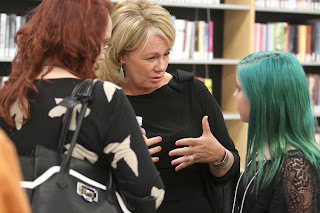 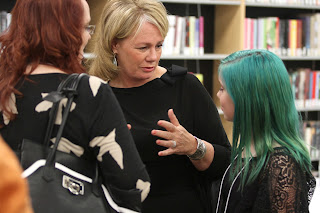 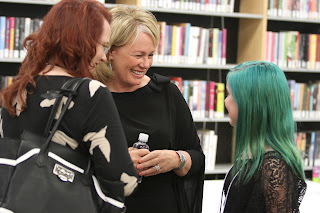