It was another lovely weekend in Fort McMurray, made all the more special by the events during Alberta Culture Days. I had the opportunity to paint a silk scarf at Silk Caravanna at MacDonald Island Park, but that wasn't my last, or only, Alberta Culture Days event.

You see over the weekend our community was vibrant with arts and culture, and while I could only participate in a couple of events I would like to share what those events meant to me, and what I think they mean to our community.

Some time ago I became aware of a little magazine in our region, published by a dedicated group of individuals who have poured their heart and soul into a small publication devoted to the written word. I submitted a piece, and when it was selected for publication I was absolutely delighted, because it was one of the first pieces of writing I have ever had published. It was with a great deal of trepidation that I submitted to the following issue, but only because I submitted a poem. For the record I do not consider myself a poet, as my poems never rhyme and probably seem amateurish - and yet the poem I submitted was selected for publication in a blind process where your submission is sent to the guest editor anonymously and thus chosen on merit alone and no other factor. And when I submitted to this most recent issue I did so with even greater hesitation, as the poem I shared is deeply personal and reflects on some of the darkest days of my life when my mother lay unresponsive in an ICU in Saskatoon. I have found, despite my lack of poetic skill, that some of the feelings closest to me, the ones hardest to release, seem to flow easier through poetry, and so I submitted a poem.

When I got the email saying the poem had been selected for publication I was pleased, of course. And when I was asked to read it at the launch of Northword Magazine Issue 9 I was honoured to do so, although I did it with tears in my eyes as this poem is probably the closest I've ever come to seeing my heart laid open on paper. And that is perhaps why I am so deeply grateful for Northword Magazine, because without it I don't know if I would have ever had the courage to submit that poem. You see I know them, the people behind this magazine, and their kindness and dedication and devotion has made me comfortable with them. Their support of my poetry and writing has given me the confidence to submit to other publications and explore the world of poetry, and so it has truly fostered my writing in ways they may not even realize.

On Sunday, the morning after the launch of Northword Magazine, I was at MacDonald Island Park for a different kind of launch. Around 10:30 am, likely to the surprise of the usual weekend traffic there, a baby grand piano was rolled out into the main concourse. This is not just any baby grand, though, as it has been painted by a local artist, and it has been installed for all to play. It is music and art without barriers, and it is, in my mind, incredible. 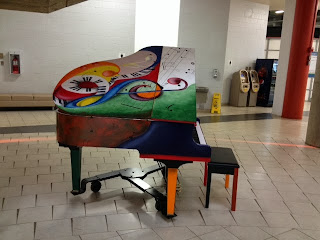 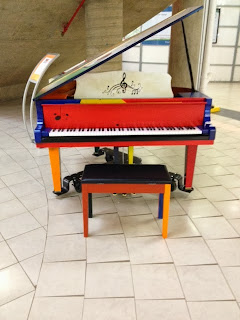 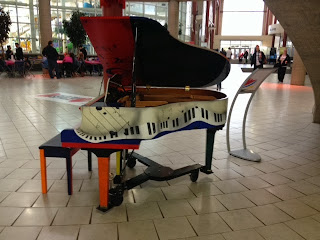 You see the Intrepid Junior Blogger began taking piano lessons almost 8 years ago. When we travel and find pianos in hotel lobbies she is always so deeply frustrated that they are almost invariably locked. Once she looked at me with sad eyes and asked how it was that people didn't understand that pianos are meant to be played, and so those pianos, likely used once or twice a year, gathered dust while budding musicians like my own could do nothing other than run their fingers across the locked surface. I remember once at one hotel she found one that was unlocked, and she played for over half an hour, attracting an appreciative audience of wedding guests who applauded and praised her skills. The next time we returned to that hotel she ran up to the piano in a rush of excitement, only to find it locked and her enthusiasm crushed. I will never forget the look on her face, her youthful exuberance fading first into disbelief, and then sadness.

On Sunday, though, some of the bitterness I have had over the experience of the IJB was lifted when a young girl, not that many years younger than the IJB, stepped up and pulled out the piano bench at the new baby grand at Mac Island. She plopped down some sheet music, and then, with some encouragement from her parents, began to play.

There are moments in time that are magical, you see. That moment, the soft notes of piano keys against the background thump of a basketball on a nearby field house floor, is one of them for me. When the young girl finished she smiled, and her parents beamed with pride, just as they should. And very quickly up stepped a young man, and he too played, beautifully and again evoking smiles of pride.

So you see this is what I think art and culture mean in our community. It means an adult like me sharing a poem that was written through a veil of tears, delivered to an audience with a catch in the throat, and followed by a quiet cry in the car. It means a gorgeous painted piano, not locked but free and open to all to play and enjoy, right in the middle of a recreation centre. It means all the things I didn't get to this past weekend but wish I could have, like art exhibitions of local artists and a dance party and a multi-cultural dance event and a live music cafe and so very much more. It means magic moments in time that you will never forget, like your shaking hands holding a poem that you are both proud of and which you wish you had never felt the need to write, and listening as the notes of a piano echo off the walls of recreation centre and against a backdrop of a central pillar draped in a massive painted silk lantern. Arts and culture are about so much more than we sometimes think they are. They are about moments you will always remember - and this past weekend it was my distinct honour to experience several of those unforgettable moments.


My sincere thanks to ALL
who participated in
Alberta Culture Days,
who organized events,
and who attended them.
I suspect it was a weekend of many
magical moments.

The following poem, published in Issue 9 of Northword Magazine,
is about my mother.
Her name was Elizabeth,
but everyone called her Betty,
and while the title of the Poem is "Alabaster"
it is really
For Betty.

In the waiting room just before
I overhear someone say
Where there is life there is hope
This is not a universal truth I know
Maybe in their case, maybe,
But not in ours
In our case there is life, but no hope

I know ours will leave
Another