One Green Paperclip, One Gift Certificate, and Hockey Memorabilia

Well, people, the One Green Paperclip in Fort McMurray adventure continues! Just as this is an ongoing project so the project itself changes and develops, and the Intrepid Junior Bloggers and I have been having some discussions.

As I've noted previously we have not put a time limit or goal on this experiment, but we have come to some other conclusions. We began to talk about what we would do should this end up with having something "big" in our hands - something of real financial value, and not just the value of the experience. Since we went into this with no expectations or desire for financial gain we have come to the decision that whatever we "end up with" - whenever we decide to end this experiment - we will donate whatever final trade item we have secured to a local charity. We have not decided which charity - it might well depend on what that final item is - but we determined that if we actually do manage to take one green paperclip and turn it into something "big" then we want to pass that along to someone else who can use it for fundraising or for their organization. Secondly, we decided that when this is all done we are going to throw a party - a party for everyone who was involved in the adventure, everyone who traded with us along the way. It will be our way of saying thank you to all those who participated, and our way of celebrating the end of the adventure. The planning for the "One Green Paperclip in Fort McMurray Party" is already underway, although we don't know the date yet - because this experiment has only just begun!

So, here's a quick recap and an update. On Friday morning I appeared on Country 93.3, and gave Jerry Neville that humble green paperclip in exchange for a radio interview. I gave my fabulous hair stylist Ellen (of Pamper Me Beauty in Abasand) a shout-out during that interview, and in exchange for that she provided me with a gift certificate for a cut, colour, style, and make-up application. 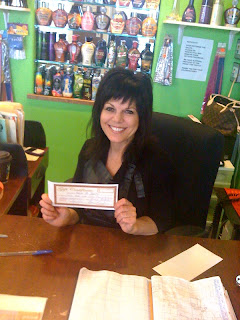 The beautiful, and feisty, Ellen - my hair stylist!
This meant that the Intrepid Junior Bloggers and I had in our hands this wonderful gift certificate, but no third trade lined up. I took to Twitter again, and tweeted what was up for trade - and it wasn't long before I had an offer, and this one from another absolutely beautiful Fort Mac woman. 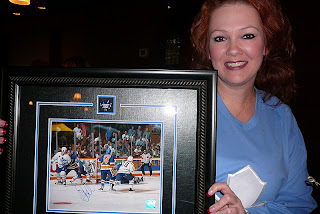 The gorgeous, and feisty, Lisa Boutilier!
(what is it with all these feisty Fort Mac women, anyhow?)
I had met someone on Twitter a few months ago, and been immediately struck by her beauty - both inside and out. That stunning red hair, that lovely smile, and that inner glow - it could only belong to Lisa Boutilier, someone I might have met on Twitter but who has become a personal friend, too. Lisa tweeted to ask if the gift certificate was still up for trade, and I said it was indeed - and then she made her offer...hockey memorabilia.
I was pretty excited. I called the Intrepid Junior Bloggers and showed them the photos Lisa sent to me: 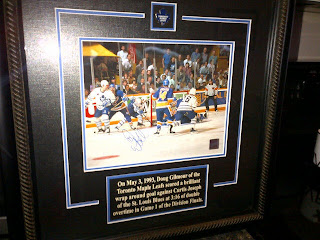 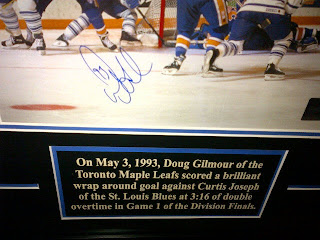 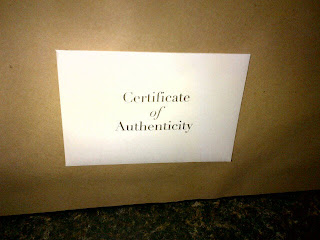 That, people, is a photo signed by Doug Gilmour of the Toronto Maple Leafs. It's from a game in 1993, and I might not know hockey but I know two things : having lived in Toronto for a few years I am a Leafs fan (and it was my dad's team, so I think it might be genetic), and two, it's pretty damn cool. But Lisa didn't stop there. Nope, she threw in something else: 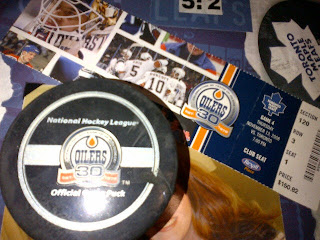 That is a ticket from an Oilers game in 2008, and that is a puck used in that game. Lisa caught that puck when it landed in the player's bench (she was seated right behind the bench, her knees pressed right up against it, she told me), and she asked the team manager if she could have it. He tossed it over the glass, and she has had it ever since. And for one gift certificate she was going to trade it all to us.
The Junior Bloggers were past delighted and into ecstatic. Not only are the items cool, they are pretty popular, being hockey memorabilia, and they quickly agreed to the trade. So, last night at the local "tweetup", we made the trade:

Lisa arrived with the hockey memorabilia, and left with a gift certificate from my hair stylist Ellen (a certificate she says she intends to give to her daughter, and I know her daughter will love Ellen as much as I do). And I left with hockey memorabilia.
So, that brings the Intrepid Junior Bloggers and I to the next step, and the next question - what ya got, Fort Mac, for some fabulous hockey memorabilia? We are ready to trade up, and ready for the next step in the journey of One Green Paperclip. We are betting that someone out there has something cool to trade for some hockey history - and we are anxious to make it happen! Be a part of the adventure Fort Mac. Don't forget, at the end of all this we are going to give it all to charity - and have one helluva party!
You can contact me about
making a trade at
mcmurraymusings@shaw.ca,
or find me on Twitter
@mcmurraymusings!
One Green Paperclip Timeline
One green paperclip
to
Jerry Neville of Country 93.3
for
one radio interview
One radio interview shout-out
to
Ellen of Pamper Me Beauty
for
one gift certificate
One gift certificate
to
Lisa Boutilier
for
hockey memorabilia
Hockey memorabilia
to
?
for
?
at January 15, 2012