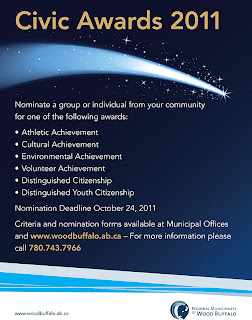 Thursday night was difficult for me, because I had received invitations to not one, not two, but three different events. This isn't all that unusual, actually, as there are often several things happening on the same evening, but it leads to some difficult choices. This one was a tough choice but in the end I went with the one closest to my heart - and I'm glad I did.

One of the three events was the Global Address at Keyano College by noted activist and media figure Ezra Levant. Levant always has some very interesting things to say about the oil sands, so I was tempted by the offer to attend this. The second event was the start-up of The McMurray Girl Success Network, another venture from the fabulous Kyla Getty, publisher of McMurray Girl magazine. I was sorely tempted by this one, too, being a woman and truly enjoying meeting other women in this community. The final one, though, the one that won in the end, was the Regional Municipality Civic Awards. As soon as the invitation hit my email inbox I knew it was the one I had to attend - because it's all about the community, and citizenship, and people.

So, Thursday night found me at the Sawridge (where I spend a lot of my time these days as it seems the destination of choice for many of these banquets, and I can't complain - the food is amazing and the bread pudding adds an extra 30 minutes to my gym time every time I eat it!) in the company of some amazing local people. Oh, there were the usual suspects, civic employees and city councillors - but it was the citizens who truly amaze me, people. These are residents no different than you and I, except that they have made a mark in the community with their commitment to athletics, culture, or volunteerism.

There were 8 awards handed out that night, and I am attaching the full list at the end of this post. I'd like to focus on just 3, however, because they are the ones closest to my heart - one because she is a personal friend, and two because they are our future.

The winner of the Fort McMurray award for Cultural Achievement is a woman who became a friend during the course of writing this blog. She sent me a message one day months ago, asking if I would like to meet for coffee - and Kiran Malik-Khan and I have been friends ever since. She is, like me, a writer, but she does it professionally as well as for pleasure. She is involved in publishing Northword magazine, and if you have read a paper in this city or picked up a copy of SNAP Wood Buffalo then you've likely seen some of her work. She also works at Keyano in communications, raises her young sons, and is incredibly involved in our community. Added to all that she is the most faithful and loyal friend you could ever want. If you're getting the impression that I adore Kiran you would be right - when we met she declared us "kindred spirits" and she is right - she values all the things I do, like family and community and the arts and culture and inclusion. I am not only proud that she is my friend I am incredibly proud of her achievements in this community, so to be on hand to see her receive her award was very gratifying.

And this brings me to two other people who received awards that evening, people who made me proud not only because of their achievements but because of their age. Young swimmer Joshua Dow won the Athletic Achievement award, and it is clearly well deserved. Joshua has an impressive pedigree as a swimmer, but even more important to me was in his thank you speech he made it clear that his success is not his alone but due to the support of others. That kind of humble nature makes me not only proud but hopeful for our future as a community, as when young men like Joshua recognize that their success is not only their own but all of ours it shows their commitment to the community and not just their sport. The second young person to take home an award that evening was Juliane Bell, who won an award for both Volunteer Achievement and Distinguished Youth Citizenship. Juliane is a Keyano student, but has been actively involved as a volunteer in this community from a very young age. Her list of volunteer activities is endless, and just hearing it made me wonder when she has time to sleep. She has been particularly committed to environmental causes as well as the local creatures at the SPCA, and those are both close to my heart as well.

After the awards were handed out (by councillors Russell Thomas, Mike Allen, Phil Meagher, and Don Scott, who all did a terrific job as stand-ins for Mayor Blake, who is on a hard-earned vacation) I stopped to hug my friend Kiran, and I went to speak to Juliane. I told Juliane of the Intrepid Junior Bloggers, and how she might not realize it but that young women like her are the kind of role models I want for my girls. In a world of celebrity brats who are in and out of courtrooms finding local role models like Juliane is a relief and gives me great optimism. Juliane is the future of our community, just as Joshua Dow is. With young people like them leading the charge I think we have a real chance to become even better than we currently are. And with role models for them already in place, like my friend Kiran (and all the other winners that night, from the Keyano College Huskies athletes to Bob Campbell to Saprae residents Solange Maher, Pam Garbin, and Michelle Archibald), the future is looking very bright indeed. It was an evening of current role models, young people on the path to becoming the next generation of role models, achievement, citizenship - and the potential of our community. You see, I don't see the potential in Fort Mac as the oil sands or industry - the potential I see is in all those faces from Thursday night - and the ones I see every day in this city. While the RMWB recognized a few of those faces on Thursday night we all have the potential to achieve great things, people, whether we are athletes or volunteers or simply citizens. We just need to seize the opportunity here and see what can happen - because it is nothing short of spectacular.