Leading the North - Conferences and Crushes

Peter Mansbridge is one of the speakers at the "Leading the North" conference, which takes place in Fort McMurray January 25-27. There are many other impressive speakers, including Patrick Moore, who was one of the founders of Greenpeace. There will be interesting speeches, and question and answer sessions, and a premier's dinner, and a reception. There will be a lot of interesting local people in attendance, and a lot of people from other places, too.

I still don't know exactly how I will fit into the mix except as a resident who cares a great deal about this region, and all aspects of it. I'm not sure how much I will have to contribute (but I'm pretty great at making stuff up, so I'm sure I'll do okay in that respect). I know that I have registered, and that I am looking forward to it with great anticipation. I know that I will learn something over the course of those 3 days, whether it's from a speech or just from meeting a new person. The schedule for the conference looks pretty intriguing, actually.

I'm really looking forward to some of the sessions, and most of all I'm looking forward to the exchange of ideas and thoughts. I suppose that's where I will have some input, because while I don't even pretend to know all that much about our industry I do know a bit about our community. And this conference is quite wide ranging, with talks touching on industry and community and everything in between.

So, back to Peter Mansbridge. We all have our weaknesses, people. For some it's rock stars, and for some it's politicians. Well, I've been watching Peter for some time, and he's long been a personal weakness. I don't think I have a "crush" on Peter, but I respect the man. I'm interested in what he does. I'm interested in what he says. I think he's pretty clever. And, okay, maybe it's a mild crush, but let's keep that between you and I, okay? He might be one of the reasons I'm going to attend "Leading the North", but he's not the only reason, either. He just happens to be the one that caught my attention first, but since then I've discovered dozens of other reasons I'm excited about this conference.

So, if you are interested maybe you should consider attending, too. To hear some of the speeches, meet some new people, or engage in some discussions. Or, you could always come stalk Peter Mansbridge with me. I'll be the one following him around, hiding behind plants and posts, trying not to be too obvious. And if you happen to see me with Peter maybe you could keep this whole crush thing quiet? Just because I've told all of you there's no reason he needs to know, is there? ;)


The "Leading the North"
conference will take place
at the Quality Inn
January 25-27!
Hope to see you there,
Fort Mac! 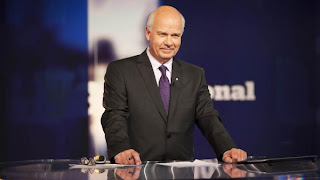