"My school has lockdown shutters," she says.

"What?", I say dully. I have heard her of course, as I hear every word she says and some she likely wishes I wouldn't. My heart stopped at the word "lockdown", though, as it always does, a small knot forming in the pit of my stomach. "What?", I say again, my forkful of food interrupted halfway on its journey to my mouth.

"Lockdown shutters. You know, if there is a shooting the shutters can be activated and then the shooter can't see in or get in through the windows". She says it so casually, as if it is just another tale of her day at school, like a story about one of her classes. "We had a lockdown drill but we need to do it again, because we were too noisy. Kind of defeats the purpose if we are loud enough to let a shooter find us," - and then she laughs a little, amused at how her classmates and she failed this lockdown drill because they are a giggly group of teenagers who could never imagine they would be on the wrong end of a rifle.

I actually feel my body temperature rising, and my eyesight going a bit dark. I swallow hard. This brave new world is so beyond what I knew growing up, when no one went into schools with guns and shot children, when that sort of act was so bizarre that one couldn't even comprehend it. But for my daughter it is so much a part of a routine that it has ceased to even be unusual.

She was in a lockdown once, in Beacon Hill when a man went into a neighbouring school, bloody and saying he had been shot. All the schools in the neighbourhood locked down, and even the entire area shut down as they searched for the gunman (as I recall it was a personal dispute, and a pellet gun was involved). She was in Grade Two then, I think, and I am of course grateful that her teachers knew what to do and how - I am just beyond saddened that anyone needs this knowledge at all.

"If there was ever a shooting I'd pull a body on top of me," she continues. "I'm small, so I can hide and play dead underneath other people", she says.

I get up from the table and turn my face away so she cannot see it. I cannot tell her it's a bad idea, because it's not. I am just in such pain that she has even thought about it that I cannot look at her.

I think it is that she has a plan that destroys my heart the most. The most precious thing in my world has a plan to survive if someone is trying to kill her. I am glad she has a plan, you see. I am just devastated that she has had to devise it at all. I don't speak as she finishes her supper, but I quietly scrape mine into the garbage, my stomach still empty but my appetite gone, and my heart and head heavy with unshed tears. 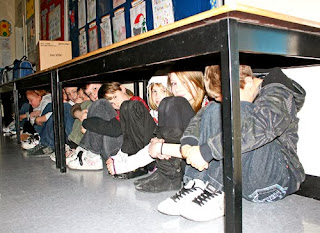