"Hey," I say when I get the email. "Hey, it's Take Your Kid to Work day, you could come to work with me!" I say excitedly to the Intrepid Junior Blogger while she stares at her laptop screen. She raises her head - just enough so I can see her eyes over the back of her computer, and I can see she is struggling to say something honest but finding a strategy to soften the blow. "Um, Mom," she says, "Mom, your job isn't all that exciting." And while I love what I do I had to admit that to a 14-year old a whirlwind of meetings and press releases and writing documents might not seem all that attractive. So I asked her if she wanted me to put out a call to my friends on Facebook and see who might be willing to let her join them at their jobs for a day - and so I did, which is how she ended up spending her work day (well, morning really) at Country 93.3 and the Wood Buffalo Food Bank.

When Jerry Neville from Country 93.3 offered to let her hang out at the station he cautioned that the day begins early - really early, as in 4 am. I thought that might be a deal breaker for her but she was quite keen on the idea, and so one very early morning this month Jerry and Nolan Haukeness from Rock 97.9 swung by my house at 4 am to pick up their coworker-for-a-day.

She had actually been a bit nervous about the whole thing, especially going on the air (as while she loves to perform on stage microphones make her edgy). I had explained to her though that the host's job was just part of what happens at a radio station, and that lots went on behind the scenes and off the air, just as happens at most jobs where you only see (or hear) the very surface of all the activity. And so off she went, to spend the early morning with Jerry and the Country 93.3 gang - and she had a blast.

I picked her up at 9 am to take her on to the Food Bank, her next stop, and found her in the newsroom chatting with news reporter Ferne Wynnyk. We talked a bit and then hopped into the car to stop for some quick fast food breakfast, and she gave me a very quick rundown of the morning at the station.

"So, did you know that Country 93.3 and Rock 97.9 have very different demographics so they need to tailor their content and advertising to that market?" she asked before launching into a long and to me baffling explanation of radio demographics, marketing, and listening audiences. She finished up rather breathlessly saying "And oh yeah, I went on the air with Jerry to talk about Take Your Kid to Work day and Rob Ford."

Yep, my kid, talking politics on the air at 7 am. I should have known. This apple fell pretty close to the tree, it seems. What really seemed to strike her about her time at the radio station though is how engaged they all are - she said they discussed politics and life and YouTube videos and recent events and just seemed to know what was going on. She told me she loved her time with Jerry and with Ferne (and I think she bonded very quickly with Ferne, a young woman not that much older than the IJB and who the IJB thinks is pretty awesome). In her short 5 hours at the station she learned a great deal about what they do, and on the ride to the Food Bank she said "you know, I'd like to spend more time there I think", a sure sign with a teenager that it was a total smash success.

Our next stop was the Wood Buffalo Food Bank, a place where she has been before as a volunteer, but this time she would spend time with Arianna Johnson, the Executive Director, to learn how a food bank runs.

When I arrived at noon I found her hanging out with Arianna in her office. They were both grinning at me and I asked how the morning had been. The IJB told me they had done a Kraft Dinner taste test (seeing if those assembled could taste the difference between real Kraft Dinner and the generic kind, and the IJB proudly informed me she got it right - my kid has a pretty refined palate when it comes to KD as it has always been a popular occasional treat in her world), and she told me she packed a hamper by herself, and went to the bank with Arianna.

"The bank?" I asked. "Yep, the bank," she said, explaining she had sat through a bank appointment and discussed financial investments (a topic even I can't handle as my eyes glaze over and show tunes begin to play in my head). She explained the need for non-profits to find ways to make the money they have grow, and how these are crucial parts of managing a non-profit organization. And then she said: "They have no jam at the food bank. There was no jam to put in the hampers. I don't get that, it bugs me that they don't have these things," summing up the reality of the food bank's mission and the struggles they encounter every day. "I like the food bank, and the people," she said. "I believe in what they do," she said, echoing exactly what I feel and think about this incredible social profit organization in our community.

On the ride home we talked about her day, the food bank and the radio station, what she had learned and what she had discovered. I asked if she was tired, having gotten up at 3 am to go to work, and she said she was fine and was headed home to spend the rest of the day relaxing.

That evening while I was still at work, at about 6:30 pm, my phone buzzed with a text message from the IJB:


After you dropped me off I fell asleep on the sofa.
I just woke up and was all confused.
I guess I had a hard day at work.

I stared at my cellphone with a smile. I would head home soon and cuddle her up and we would talk about her time with Jerry and Ferne and Arianna, and all she had learned. We would discuss how she believed she had the best "Take Your Kid to Work" day of any kid in the entire city, and how she had found new friends with the people who share this community with us. We would talk about radio stations and social profit organizations, and how they connect and how they differ, and how they partner to benefit this community, and we would talk about buying a lot of jam for the food bank. We would discuss market demographics and financial investments, and we would share our thoughts on how lucky she was to have people in her life who not only opened their jobs but their hearts and minds to her, sharing their passion for what they do with a Grade Nine kid. And we would be grateful for all that, but all that would come later that night. For now, as I looked at my text message, all I could do was smile and think that she had had a hard day at work indeed, and perhaps that was the best thing that could have happened on Take Your Kid to Work day, as she had a new understanding of radio stations and food banks, and working hard to make a difference in your community every single day. The Intrepid Junior Blogger had gone to work for a day, and found an entire world she didn't know about is out there, just waiting for her to one day join it and begin to make her difference, too.

The IJB and I
would like to thank
Jerry Neville and Ferne Wynnyk
and the entire gang at Rock 97.9 and Country 93.3
and
Arianna Johnson
and everyone at the Wood Buffalo Food Bank
for sharing their jobs with her for a day! 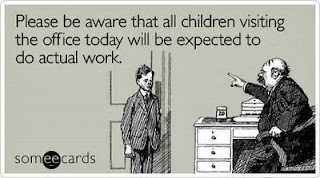