Life With a Home Wrecker

I live with a home wrecker.

No, not THAT kind of home wrecker, but the kind that is small and furry and has four paws and sharp white teeth and meows for no reason at 3 am (probably just because he is lonely). He is a very bad cat, really.

This morning I was looking outside at the snow, thinking about shovelling (note the word thinking, which indicates consideration, not intent). I suddenly realized my lovely sheer curtains, left in pristine condition by the previous owners of my home, have small pinprick holes all over them. The culprit stared at me from the sofa, unrepentant about his multiple attempts (and occasional success) at climbing the curtains, and in the process destroying them.

I always knew cats to be curious creatures who get into trouble. The phrase "curiosity killed the cat" is an apt one, after all, and based on experience not speculation. But little Sirius Black has gone far beyond what I ever thought a few pounds of feline could do. 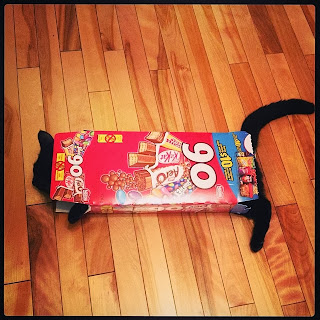 Sirius has ripped open bags of cat food, ferret food, dog food, cat treats, dog treats, and potato chips. He is lousy about hiding his miscreant acts (or just doesn't care) and will leave the bag splayed out on the floor, with kibble or treats spilling everywhere (and his belly suspiciously rounded). 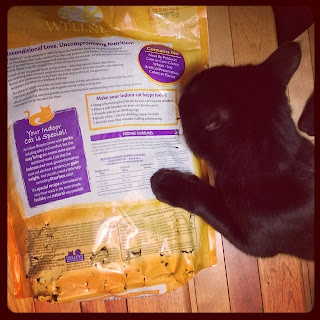 So far the cat has destroyed several sets of curtains and blinds. One chair, which is thankfully fake leather and not real, feels like the skin of someone who has undergone allergy testing, covered with pokes from sharp claws. He is working on the edging on every carpet in the house, pulling out strands, and he sharpens his claws on the cupboards, the railings, and the furniture.

The middle of the night is the most frequent time for a sudden crashing noise, and then the patter of rapidly escaping paws. A common sight is a small black furry blur running past you as he escapes the scene of the crime, hoping to somehow put the blame on the baffled dog, no doubt. 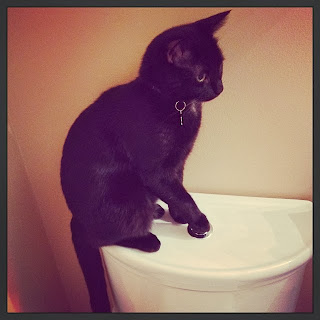 Ah, and the poor dog. She is enchanted with the cat but the cat is, quite simply, a jerk who hangs off the edge of the table to take swipes at canine heads as they walk by. The dog is completely baffled by this small black creature who has moved in and taken over, and while I once thought the dog got into trouble Sir Black has taken the concept of "trouble" to an entirely new level.

He is an indoor cat who constantly tries to escape outdoors, and his plans usually involve making sure you have your arms full of bags or boxes in order to try to dart by and to freedom, glorious freedom. He made a break for it this week, but was thankfully distracted by the fresh snow allowing me enough time to pounce on him and drag him back into the jail of warm beds and full food bowls. 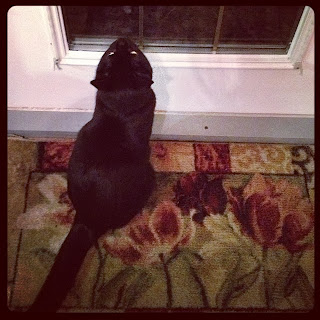 He doesn't much like being cuddled, either, and he will try to evade you if he sees you coming and looking like you might want to hold him. He will sit next to you, or in the same room, but only rarely will he sit on you, as he is an independent creature (and frankly he has things he is trying to accomplish, like chewing on a pair of shoes at the back door that somehow have earned his enmity - and in my world shoe-chewing is a serious crime, you see). 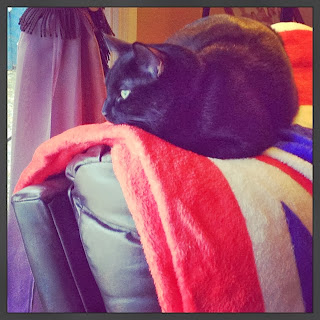 He isn't really keen on the ferrets, and we have learned that when the ferrets are out to play he must be abolished to another room, where a small black paw darts out from under the door. I don't think he would mean to hurt the little weasel gang, but he plays rough, and the ferrets total lack of decorum seem to unhinge him slightly (the first time a ferret pounced on him I thought he would have a feline heart attack).

He is destroying my house, he bullies and torments the dog, he is too rough with the ferrets, and he is constantly in trouble.

And yet somehow early in the morning when I get up and open my door to a small black cat waiting on the other side purring I forgive every transgression and every single destroyed curtain. When I pick him up on those early mornings and we cuddle - that rare time he will allow it - and bury my face in his plush black fur and he purrs loudly in my ear I completely forget all the middle-of-the-night crashes and all the shouts of "bad cat!" that echo through the house.

Sirius Black is a very, very bad cat. And I wouldn't want him to be any other way, really. 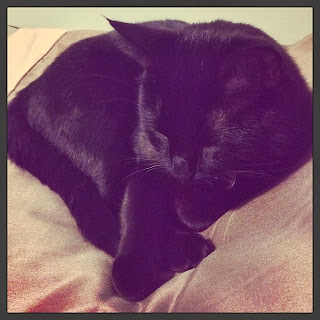