Running on Fumes, Funk, and Java - Day Three of interPLAY 2012

I fully admit it. When Sunday morning dawned last weekend and my alarm went off I hoped it would explode in flames. When it refused to cooperate I eyed it evilly from beneath my covers, reluctant to get up as I was pretty much past exhausted and into zombie. I was quite afraid that my dead-eyed stare might get me mistaken for a zombie, too, but I rolled out of bed and rolled into my car, off to Keyano College for the final day of interPLAY 2012.

I arrived at my tent to find it still well secured, and the winds had died down. It looked like it would be a beautiful day, and I was eager to welcome some new performing artists to the Transalta Mainstage. I set up my little tent, putting drinks on ice and making sure there were enough mini-chocolate bars for everyone (although discovering to my dismay that one of the artists from the day before had apparently eaten all the Crunchie bars from the mixed bowl, leaving me sad as I love those little bars with a passion almost equivalent to my feelings for coffee).

Sunday would be a shorter day, with no late performances, but the artists were no less exciting. Johndough was returning for another day, and local performer Barry Duke would make an appearance. I was also excited to be welcoming Edmonton group Red Power Squad, and especially Vancouver band Five Alarm Funk.

I was a bit subdued Sunday, no doubt. I hope I welcomed the artists with the same enthusiasm as the previous two days, but must admit that they were probably vaguely frightened by the slightly squirrel- like nature of my behaviour due to pure caffeine overdose. I hope that my eyes weren't really spinning in their sockets (as it felt like at some points) but I'm pretty sure anyone could see that coffee had stopped being my friend and become instead my nemesis, a necessary evil to survive. Once again kind friends kept me supplied throughout the day, although my favourite of the entire weekend was an iced coffee delivered by a very sweet young man named Kingston and who handed it to me proudly, beaming a gap-toothed little grin the entire time (he made my day, frankly). 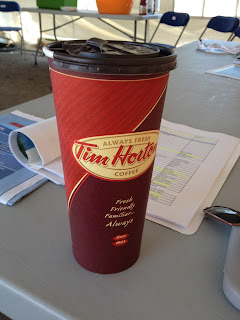 It started off sensible but.... 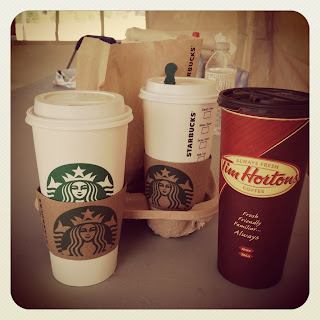 ...the triple delivery  is where I decided sh*t just got real... 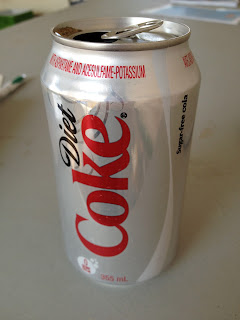 ...and I thought the Diet Coke would be more sensible than coffee.
I was wrong. 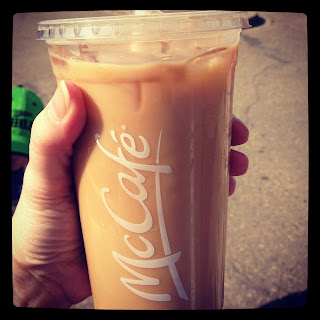 An iced coffee from Kingston! :)

I had a chance to speak to Johndough, and found a quiet and pleasant young man who I believe is on the cusp of some significant success. The fact that I went away that day with the chorus "who's Johndough" ringing in my mind is testament to the fact that this young man has some talent. As for who Johndough is - well, he is a young man from Fort McMurray who will quite likely shine very brightly in the musical world, and who will represent us well, I think. Local Barry Duke was friendly and talented, and I was pleased to entertain two local artists in the tent again.

When the members of Red Power Squad arrived I was pleased to see they enjoyed the food and cold drinks, and I was further pleased by their energetic performance - and their sweet natures, all of them thanking me when they left the tent for the day.

It was when Five Alarm Funk arrived that things got really interesting, though. As they began to pull out instruments from drums to saxophones I became intrigued. They are not a small band, but rather one with several members, and they rapidly filled the backstage area with equipment and large personalities, friendly and engaging. I eagerly anticipated when they would take the stage, a performance that would close out the mainstage performances, and one I expected would be good. But it wasn't good, people. It was bloody spectacular. 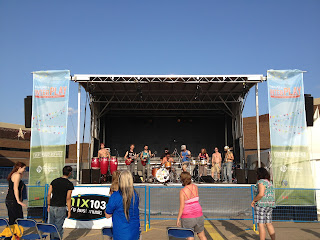 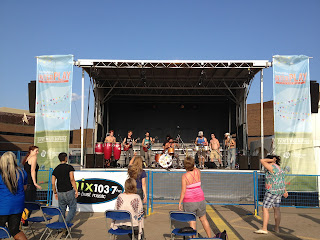 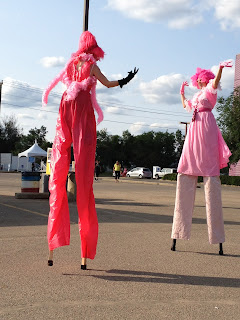 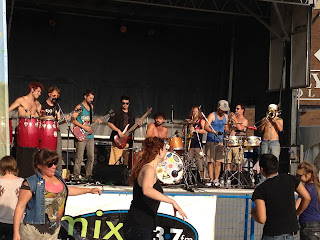 I don't know how to describe them so I will post a video. To say they were lively is like saying I was a little high on caffeine. They were frenetic almost, a performance worthy of ending three great days of music. They were stellar in every single way, and they closed out the mainstage with a performance that made those watching, including me, dance.


And then Five Alarm Funk played the final song, and the crowd that had gathered to watch drifted away. The band packed up their gear and left (with a little road care package from me, some food and drinks left over in the tent and enough to get them a good start on their long drive home). The stage crew, terrific guys I had worked with over the last three days, began tearing down their equipment. And I began to tidy up my tent, folding up tables and chairs, and rolling up the white Christmas lights that had given it the glow I so loved every night. 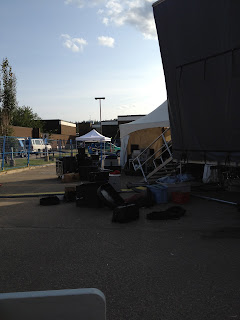 It didn't take long for the tent to be cleaned out and empty. I looked around it, and saw an empty white tent, nothing more and nothing special. And yet it was special to me. For three days I had welcomed performers, talked with them about their communities, and shared stories about mine. I had met local artists I know I will see again. And I had worked with the team from Events Wood Buffalo, a group that has become very close to my heart over the last year.

I'm going to close this post with some remarks about interPLAY 2012. I have heard some criticism about it, and I understand the criticism. What I want understood, though, is that I know and have worked with every person on the EWB team. I know first hand that they poured blood, sweat, and tears into this festival, and that they faced tremendous challenges (all new personnel, the prospect of mounting three events back-to-back, and a shortage of volunteers). I know that while I was tired that they were past tired and well into exhausted, each of them working much harder than I and on much less sleep. They have my enduring respect, and I would suggest that those who choose to critique interPLAY may want to consider volunteering next year, as that act alone would alleviate some of the pressure felt by those who bring us these events. It's very easy to criticize from the outside looking in - but if you want to help then volunteer your time and skills, and be a part of the event. Not only will that help to improve the event itself it will enable you to see what it takes to stage a festival like this. I know - because I have seen it.

During Sunday afternoon the EWB team, various performers, and volunteers took the stage to thank everyone who contributed to interPLAY 2012. It was a moment to express gratitude to those who attended, volunteered, performed, and worked. It was a moment in the sun on the Transalta Mainstage, and I dragged myself up there, weary but proud in my interPLAY 2012 t-shirt. And I am proud, people. For three days I was a part of the Events Wood Buffalo team, bringing my community an annual event I have grown to love over the last decade. I was proud to have represented my community to the performers who came from other places, and to have befriended those who also call this community home. I was proud to be from Fort McMurray, and deeply grateful to call it home.

I looked around my tent one final time late Sunday, took a final swig of coffee, and tossed the emptied cup into the trash. Then I got into my car and drove home, leaving behind a little white tent devoid of things and full of memories instead.


My deep and sincere thanks to
all the performers who came through my tent.
You were a joy to entertain and host.

My thanks to
all those in Fort McMurray who
came out to enjoy interPLAY -
your attendance is what really makes a festival!

And finally my deepest thanks and gratitude to
Events Wood Buffalo
for allowing me to be part of their team
I was proud and honoured to be one of you,
even for just three days,
and I am grateful for the opportunity.
Thank you for what you have given me -
and this community.
at August 19, 2012