Fort McMurray Reads - Or Why I Wore Baseball Cleats In Public 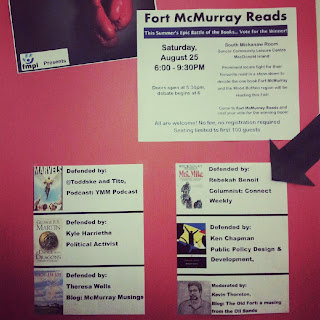 You know, I get invited to do a lot of amazing things because of this blog. I get invited to attend events as media, I get to interview fascinating people, and every once in awhile I get a request to do something that is not only fun but has great personal meaning. This happened again when the Fort McMurray Public Library asked me to serve on the panel for the inaugural Fort McMurray Reads, a competition to find the book that the entire region should read this year.

I've written before that it took me some time to pick a book, but once I did I committed to my book with a passion. I love books, I love writing, and I love a good debate, so this was a combination of three things I am pretty passionate about. And when I discovered that I'd be debating friends like Toddske and Tito from YMM Podcast, Kyle Harrietha (local political pundit), Ken Chapmam (Oil Sands Developers Group), and writer Rebkah Benoit from Connect Weekly I got really excited. I love to debate but I love a debate where I know the participants (and just where to stick the knife) even better. 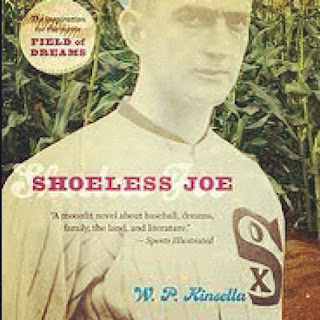 To prepare for the debate I re-read my book of choice, "Shoeless Joe" by Canadian author W.P. Kinsella. I first read this years ago, the book that was the basis for the movie "Field of Dreams", and had fallen in love with it. Re-reading it was liking finding true love all over again (especially when we all know how rare it is), and I fell in love with the characters, the story, and the themes once more.

I was ready to do battle, but since soldiers get uniforms I felt it only right to have one of my own - and that's how I showed up at MacDonald Island Park in a dress and nylons - and an Oil Giants baseball jersey, baseball cleats borrowed from my best friend's son, and carrying a baseball. I've never worn baseball cleats in my entire life, and it seems unlikely I ever will again - but to show solidarity with my book (which is supposedly about baseball but is really about so much more) I felt I needed to put my money (or shoes) where my mouth was. 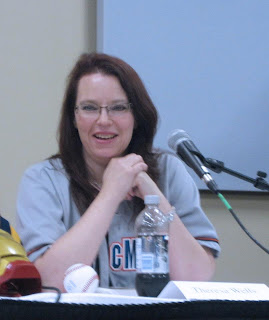 The FMPL and Mac Island had set the room up so the panellists and our moderator (local writer and terrible punster Kevin Thornton) had some privacy before and during the debate. We met in the back and chatted, not about our books but rather about current news in our community. The only person I hadn't met previously was Rebekah, and when she arrived I discovered she is a lovely woman, warm and funny, and I knew it would be a wonderful evening with friends. 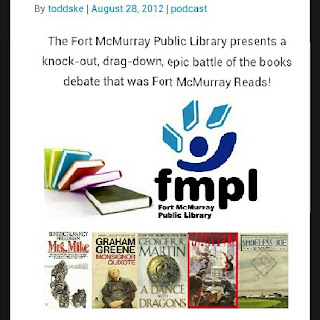 There we were, all arguing for the books we chose. Me, a blogger and decided non-athlete, arguing for "Shoeless Joe", while Toddske and Tito promoted the graphic novel "Marvels". Kyle Harrietha argued the merits of "A Dance With Dragons" (a book series that is the basis for the series "Game of Thrones", and could double as a doorstop considering it's weight and size), while Ken Chapman argued for "Monsignor Quixote" (a revisiting of the classic tale of Quixote tilting at windmills). Rebekah Benoit championed "Mrs. Mike", a romantic story of life in the north, and Kevin Thornton tried to exercise control over all of us despite our occasional trash talk and dark mutterings. 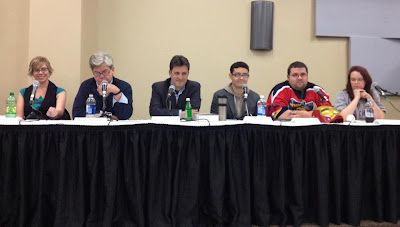 It was a lively discussion, each of selling our book but also trying to tie it into life in Fort McMurray and this area. Each of us clearly had an attachment to our book, and each of us felt strongly about why it was the book for all of this region to read this year. Things were kept civil as I think we all recognized the merit of every book at the table, and as we all have significant respect for each other because of what we each do in our community. The "trash talk" was mild and humorous (although a few shots were taken at the potentially "delusional" nature of the main character of my book who hears voices and has visions, but being pretty much made of Teflon I deflected these easily).

We debated and answered questions, we summarized and we wove the narrative of our books in front of the audience, trying to share with them why these books had captured us. And, in the end, the audience picked up pens and pencils and voted, and Rebekah Benoit's choice of "Mrs. Mike" was voted 2012 Fort McMurray Reads Book of the Year. 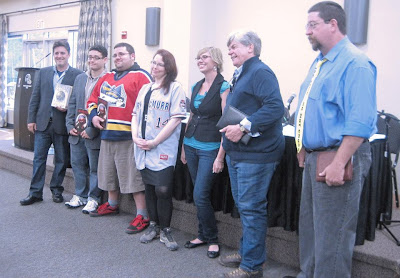 I could say I was disappointed my book wasn't chosen, but that wouldn't really be true. I was just so damn pleased to participate that I couldn't help but feel that I had won, too. I was more than delighted when several people told me that they planned to read my choice as my words had inspired them to do so. I had effectively passed my love of the book on to them, infecting them with my enthusiasm for it. That was huge to me, because I think a good book can mean different things to different people, and resonate with them for different reasons.

As for me - well, I plan to read every book that was presented. I think I will start with the winner "Mrs. Mike", check out "Marvels", take "Monsignor Quixote" for a spin, and then, when the snows have settled in and I need a large book to keep me warm late at night, I will delve into "A Dance With Dragons".

When I came home from Fort McMurray Reads I put my copy of "Shoeless Joe" on my desk. It sits there still almost a week later, with the baseball jersey and the baseball. I think about this book and why it captured my heart when I first read it in the 1980's, and why it had new meaning for me all over again when I read it these last few weeks. You see, "Shoeless Joe" is about a journey of the heart - about following dreams and passions, about being unafraid to forge a new path. It is a book about knowing your own heart and knowing what will make it sing, about how even when a journey can seem crazy to others we may know it is the one we need to take. And that, people, is a story I understand very, very well, as I see it every day in this city - and I have seen it these last few months in my own life as I follow a new path, and travel my own journey. For most of that journey I have worn a skirt and heels, but that night at Fort McMurray Reads I wore a baseball jersey and baseball cleats, just as my heart told me to do. Sometimes you just need to follow your heart, people - it usually knows the right direction to go. 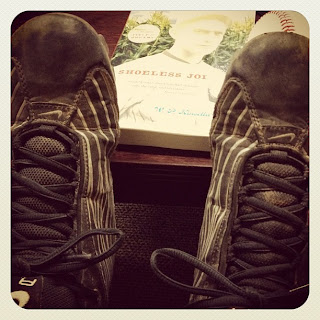 My sincere thanks to
Fort McMurray Public Library
for organizing
Fort McMurray Reads -
and for asking me to present a book.
I was so honoured.
My thanks as well to all
the audience members who gave up a
Saturday night for a book debate.

My thanks to moderator
Kevin Thornton,
my fellow panelists
Kyle Harrietha,
Ken Chapman,
Toddske and Tito,
and congrats to winner
Rebekah Benoit!

If YOU want to hear the entire
Fort McMurray Reads
debate you can check it out at
YMMPodcast Episode 49
as they recorded and released it as a podcast :)
at August 31, 2012