Well, people, I admit it. When I woke up to greet day two of interPLAY I was pretty whipped. I'd been up until 2 am, having spent the entire day and evening backstage in my little white tent playing hospitality host to all the performers on the Transalta mainstage. I'm not really used to late nights, a combination of age and having a child that (thankfully) is old enough to sleep through the night or generally attend to her own needs if she does awaken. Despite my tiredness I pulled my things together Saturday morning, hopped in my car, and headed down to the interPLAY site in front of Keyano College.

When I arrived I was a little disturbed to find that the tent door I had secured the night before was wide open and flapping. I was worried someone had gotten into the tent overnight (although they would have only found mini-chocolate bars and some pop, and likely been very disappointed). All in the tent was fine, though, except that everything had blown over - chairs, and even a table, as the wind had picked up considerably overnight. It appeared it would be a blustery day, so I secured the tent as best I could, picked up all the fallen items, and then headed to another site meeting with the team from EWB.

Now, Day Two at an event is typically much easier than Day One. On Day One all the problems usually surface and you are able to address them, and you feel much better about Day Two. And this event was no different, as Day Two promised to be smooth sailing, except some concern about the weather, both dark clouds and that incessant wind.

I was a little concerned about something else, too. The day before David Whitelock, EWB Executive Director, had asked me for a "favour". Just the tone of the question made me nervous, and when he explained that two comedians from Calgary were looking for a local victim - er, guest - for their Saturday night variety show I knew my nervousness was not misplaced. He had agreed to do the show Friday night, and he hoped I would agree to do the one on Saturday. Ignoring my trepidation I agreed, and Saturday morning found me already growing a bit tense at the prospect. I've grown a bit more accustomed to radio and television, but being on stage still makes me a bit shaky. I wasn't sure I was ready to be skewered by two comedians, but as they say "the show must go on" and since I had agreed I would do it despite my last-minute misgivings.

I set up my little tent again and began welcoming our performers for the day. Back for a second day was the lovely Gypsy Butterfly, local band Surface Below, and the talented Steven Bowers. It was a very busy day for new arrivals, though, and I anxiously awaited as bands and performers began to filter in for sound checks.

I was amused when I spotted the band members from Aerosmith Rocks immediately, the similarity of the lead singer to Steven Tyler being both uncanny and definitely noticeable from across the parking lot, which is where I first saw them. Hailing from Victoria I was delighted to chat with them about Fort McMurray and this region, and was pleased to discover they not only knew a bit about us but had played here once before, too. The arrivals of Edmonton bands The Flash Jam and Vermin in Vinyl was a hustle of beer tickets and equipment and the general chaos of trying to welcome several band members all at once. Local rapper Johndough, a Holy Trinity high school grad, arrived with his little entourage (including a bear mascot, which tended to give the backstage area a real festival feel). It was the arrival of ReignWolf I was really looking forward to though, as I'd checked out his music on YouTube the night before and been astonished by the talent of what appeared to be a very young man with a very bright future. When Jordan Cook, aka ReignWolf arrived, I was not disappointed as in addition to talent I discovered a humble, friendly, sweet, and handsome young man accompanied by his crew, and I eagerly anticipated hearing him play.

The day once again passed in a blur of ice and beer tickets and bands taking the stage for their time in the sun, as the clouds gradually gave way to bright sunshine. The wind continued to blow, though, and one unforgettable moment was when a table, freshly loaded with platters of fruit and vegetables and cheese, blew right over in my tent scattering everything on the ground. I was stricken, of course, but delighted when I realized that Aerosmith Rocks were not only great musicians but terrific guys as they helped me to clean up dirty grapes and cheddar cheese cubes and carrot sticks. They laughed, I laughed, and the world was good again despite the minor catastrophe. Part of the blur of the day was arrivals of coffee at regular intervals, thanks to kind friends who suspected I was functioning purely on caffeine and commitment. 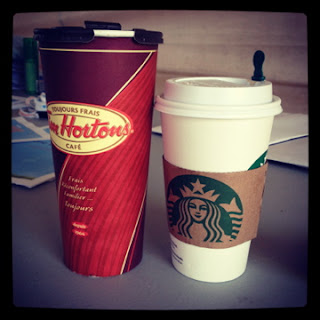 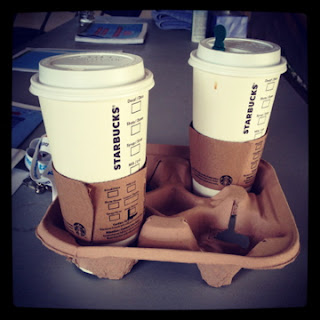 I must admit I didn't get to see every musical act. You see, I had another commitment, which is how I ended up in Keyano Theatre doing the "Hot Nuts and Popcorn Variety Show", a David Letterman-style show where the two hosts interview their guests in front of an audience. Prior to the show I found myself in the green room with the other guests, all of them performers from interPLAY, and I listened as they spoke about our little festival. I chatted a bit about our city, and then, quite quickly it seemed, the show had begun and I was on. 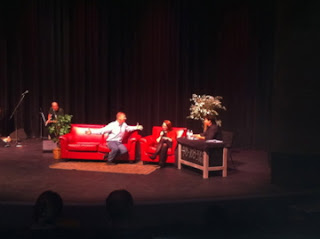 I've never been on the stage at Keyano before. I didn't realize that the bright lights prevent you from seeing the audience, so as I walked out I had no idea how many were there, or who was in the crowd. I was ready for the questions, though, and I fielded them as best I could (including one about syphilis, which they probably shouldn't have warned me about in the green room as I googled it quickly on my phone and had statistics ready putting that "epidemic" in some perspective). I was a bit startled when someone texted the hosts to say they should ask me how many shoes I own, but I deftly avoided a numerical answer (on the grounds it would almost certainly incriminate me). I couldn't see the audience so I have no idea who asked - but clearly someone knew me well. It was only 5 minutes or so but it seemed a lot longer under the bright lights and with a microphone in my hand. I was relieved when my segment ended and I could hand back the microphone and escape the bright lights, back to my little tent where I plugged in the string of Christmas lights and set it aglow once again.

The performances Saturday evening were stellar, people. Aerosmith Rocks truly owned the stage (slightly cheesy wigs aside, other than the lead singer who has very real Tyler-style hair). They played a brilliant set, and the crowd danced and sang along, including me, who sidled up right in front of the stage to snag photos and the experience. When they left the stage ReignWolf went on, and to say this young man has talent is an insult. He has more than talent - he has a gift that is rare and precious, and I was honoured to hear him perform. Knowing that he is a kind and gentle young man simply made it that much better. 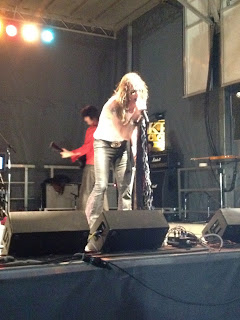 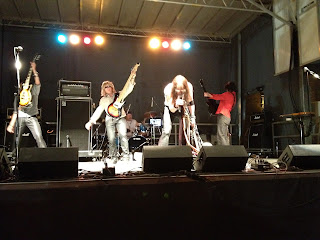 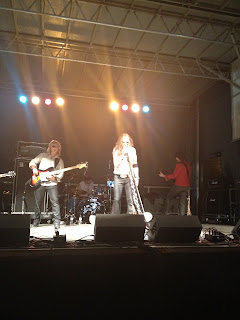 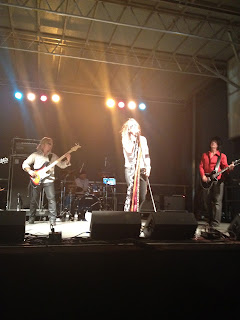 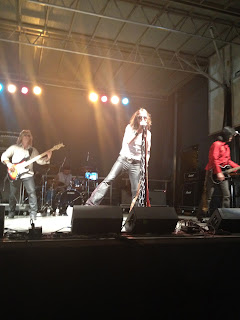 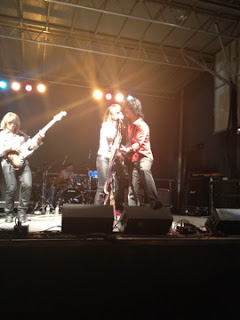 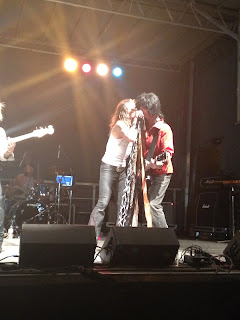 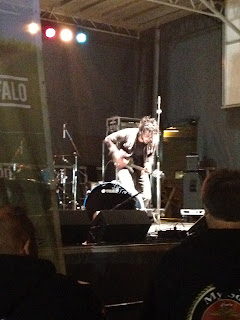 When all the performances were over I found myself backstage with one band member, sharing photos of our kids and talking about our lives. We laughed and joked under the night time summer sky, the little white tent glowing behind us. The band members still on site packed up their gear, and then, quietly, they all drifted away into the night, leaving me alone in my white tent again. It was close to 1 am, and I was exhausted. It had been a busy day, with dozens of performers and a variety show performance, too. It had been another day of talking about my community while taking care of the performers, and it had been another night filled with music and stars and a little white tent glowing softly in the darkness. I tidied my tent, secured the tent flap even more tightly this time, climbed into my car, and headed home once again to rest before the final day of interPLAY 2012.


My deep and sincere thanks to
Gypsy Butterfly,
Surface Below,
Steven Bowers,
John Dough,
Vermin in Vinyl,
The Flash Jam,
Aerosmith Rocks,
and
Reignwolf
for being a genuine pleasure to meet and host :)