Political Flyers and the Wisdom of the Intrepid Junior Blogger

It happened again yesterday. I opened my mailbox and there it was. Not an unexpected bill, or a lurking cobra. No, just a harmless looking black and white flyer from our local Member of Parliament. No big deal to most people. To me, though, it was like finding another little quarterly bomb in my mailbox - because I think these things are an enormous waste of money. And that's my money, and yours, they are wasting.

I know that our representatives get some sort of allowance or budget to send these out, so it's considered legitimate. I know that there are people who see them as some sort of accountability reporting to the people (although I think they are non-campaign season campaigning cleverly disguised instead). Just because there is a budget to send these doesn't mean one has to. And if accountability is desired then something with some actual facts and figures might be nice as a flyer saying "we did this and did this and this" without any backing information seems pretty...unaccountable.

For years I have been taking these flyers, writing "please stop wasting my taxpayer money on these flyers" and sending them back. And for years they have just kept coming. Yesterday I took my marker and scrawled all over it again, knowing the futility but doing it anyhow because it felt like at least I was making a statement. And that's when the Intrepid Junior Blogger came into the room, finding me with marker in hand, and asked to read the flyer. 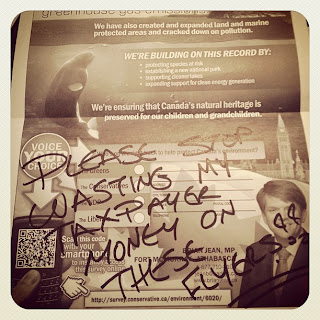 She looked at it and snorted. You see, there is a question on the flyer. It says "Who is on the right track to protect Canada's environment?" and then you can check one of four boxes (one for each political party) and send it back to our MP (where they will no doubt take careful note of the answers for a fine statistical survey which no one will ever see). She looked at me and asked how many of these get sent out. I replied that I imagined they go to every household in his constituency. Then she asked how exactly sending out a paper flyer that in the vast majority of cases will end up in the recycling bin (or even worse, the garbage) jived with that question. How was sending out a paper flyer destined for the trash or recycling considered the right track for the environment? What about the trees that went into the paper, the resources used for printing it? And that's when my jaw hit the ground because the kid is clearly a helluva lot smarter than me, as she had nailed it exactly.

These flyers aren't good for the environment, they are a waste of taxpayer money in my opinion, they prove absolutely nothing, provide no true sense of accountability, and are just off-season campaigning. So, I have some suggestions.

If our MP really wants to engage this community how about doing some local radio shows like McMurray Matters? How about coming here and having a little public dialogue with his constituents, maybe hanging out at Tim Horton's for few hours to do so? And, even better, how about going to five different neighbourhoods and knocking on twenty different doors and asking the question that was on the flyer? I know that might seem odd - door knocking when there isn't an election looming - but I think if one wants to truly connect with the public that's the way to do it. And I'm going to make an offer, too. If he chooses to do that, I'll drive. Hell, I'll pay for gas, accompany him to every single door, record the responses (including any door slams), put it all over Twitter that he's out there, and write about it in this blog. Because to me that's not only better for the environment than mailing a flyer to thousands of homes - it's better for the constituents, too. And somebody who does that? Well, they are quite likely to get my vote, too.