I'll admit it. After just day one of Canada Rocks 2012 spent working backstage I was pretty whipped, and I hadn't even stayed for the full day. I woke up Saturday morning feeling a little "off" - I couldn't tell why, just not quite myself. As they say, though, the show must go on, and since I had promised to be at Mac Island at ten I rolled out of bed and into my car.

I arrived backstage to find it absolutely silent - and with the remains of the night before in evidence. After parties are a pretty common event with any band, and a festival such as this is no different. Thus the first task of the day was cleaning and stripping down the dressing rooms in order to prepare them for the day and the new set of performers - this time the Rebirth Brass Band, Classified, and K'Naan.

I went to work, dragging a garbage can behind me, cleaning as I went. It wasn't long before the rooms were in good shape, and then I tackled the EWB temporary "office", which was a bit chaotic (when you are frantically looking for a corkscrew things tend to get tossed around, and so the office was a bit of a jumble from the day before).

I wasn't there for long, though, before Mac Island staff showed up - this time in the form of Corinne, one of the banquet staff. Now, I had fallen in love with Evelyn from Banquets during the SummersEnd Festival as she had saved me on more than one occasion. When I had first met Corinne the day before I had been nervous. I had come to rely heavily on the professionalism of the Mac Island staff, and I knew Evelyn to be pretty much the perfect go-to person for any request. What if Corinne wasn't the same, I fretted? As I quickly learned, though, Evelyn trained Corinne - and it shows. Corinne isn't just a professional, she's a goddamn mind reader. She would often show up with exactly what I was looking for, leaving me dumbfounded at how she knew I needed it. I came to rely just as heavily on Corinne as I did on Evelyn, entrusting them completely and being delighted with the result. My advice is this, people - if you are planning an event at Mac Island ask if Corinne or Evelyn will be there. If so, put your worries aside, as you are in capable hands.

As morning rolled into afternoon I realized I still wasn't feeling well. I forged ahead, though, stocking the dressing rooms, ensuring the rider requirements were met, and, finally, with regret, asking if someone else could handle the Meet and Greets with Classified and K'Naan as I was simply not feeling well. Before I left Mac Island, though, Nadia, EWB Festival and Events Manager, spotted a t-shirt in the EWB office, and asked what it was. And that is when I explained the story of Nathaniel Crossley, ten year old boy, fundraiser, and leader.

As some of you know Nathaniel recently raised enough money to build 4 wells in Africa. He did so through donations and through selling t-shirts. He had given me one of his t-shirts for myself - and one to see if I could give it to K'Naan. You see, there is a link there. Nathaniel is a huge U2 fan, and started a fan page for Bono when he injured his back. The t-shirt is emblazoned with the motto "Bono I Got Your Back", and young Nathaniel even got to meet Bono not so long ago. And it just so happens that K'Naan, a young man with an incredible story that began in Africa, is a friend of Bono's, too. Nathaniel wanted him to have a t-shirt, but as I was headed home I knew I could not deliver it - so I told Nadia the story, the wells and the Facebook page and Bono and the gift to K'Naan. I drove away, finally realizing that the reason I didn't feel well was that I had been brewing a mild migraine, and headed home to bed. I was saddened that most likely Nathaniel's gift to K'Naan would be forgotten in the chaotic backstage atmosphere - but of course, people, I should have known better.

I went home and slept the sleep of the dead, and awoke 3 hours later to a cell phone with an almost dead battery and some frantic messages. Nadia, being the good soul she is, had given K'Naan the shirt, and explained the story. He had been touched, it seems, and had immediately taken a photo of it to email to Bono. But there was more. Much more. K'Naan wanted to meet Nathaniel.

Frantically I dialed the number for Nathaniel's dad Blake and asked if they were around. I told him that K'Naan wanted to meet Nathaniel. First there was silence - and then there was excited shouting. Nathaniel's mom had the family car. Time was tight. K'Naan wanted to meet Nathaniel before the show. I stood there, in my bathrobe, looking like a truck had hit me (and feeling like it left tire tracks on my brain) and then I said "Be ready to go, Blake - I'm on my way". And into my car I went, after quickly throwing on a dress and shoes, off to ensure that a ten year old boy who deserves all the recognition in the world received it.

We arrived backstage, Nathaniel and Blake wearing their t-shirts, and waited a short while until K'Naan was ready. And then they met, this ten year old wunderkind and this young performer who has seen so much in his life. It was a touching meeting by any measure, Nathaniel shy and nervous, K'Naan gentle and so softly spoken I had to lean in to hear him. I explained that Nathaniel is a local hero, a leader of the best kind, and I took photos to record the moment. K'Naan signed the Big Spirit magazine that Nathaniel was recently profiled in, and they chatted about the wells. When the meeting was over EWB had even found two tickets for Nathaniel and Blake, so we went out to enjoy a bit of the show. 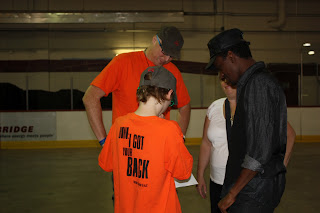 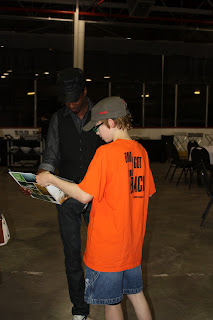 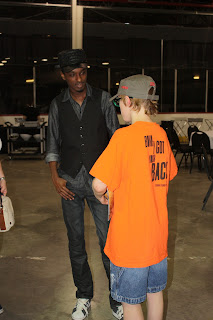 Look, people. Maybe that meeting doesn't sound like much, but for me it was another example of paying forward all the kindness I have been shown. And I cannot tell you the joy I felt when K'Naan took the stage, spotted Nathaniel in the audience, and then pointed at him, smiled, and waved. The smile on that ten year old face was worth the worsening headache. It was worth dragging myself out of bed. It was worth a few moments of my discomfort to see magic happen for a young man who I think will have a lifetime of making magic happen for other people. The meeting of Nathaniel and K'Naan will forever be etched in my mind, the meeting between a kind and generous artist and a kind and generous boy. 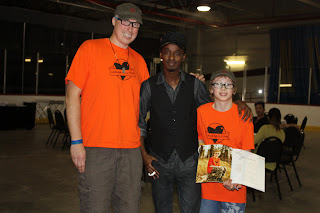 I hear the concert was stellar, although we only stayed for a few songs before I drove Nathaniel and Blake home (and I back to my bed, knowing the next day would be another long one). I got to hear K'Naan do a cover of Neil Young's Heart of Gold, and I suppose that encapsulated the whole event for me. K'Naan has a true heart of gold, the kind that wants to meet the young boy that gives him a t-shirt, and Nathaniel has a heart of gold, the kind that wants to build wells in Africa so others in this world have hope. It was a meeting of hearts of gold, facilitated by the heart of gold that beats in Nadia's chest, and it seems fitting that this was the final song I heard K'Naan sing before I crept off into the night. I dropped off Blake and Nathaniel, drove home, and crept into bed, feeling a warm glow in my own heart, a glow that comes only from seeing the gold in the hearts of others.