A Perfect Evening With Hedley 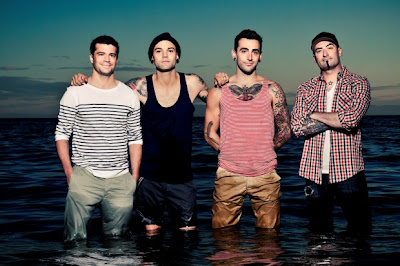 I am always excited about concert announcements. Some thrill me more than others, of course, simply because as with anyone else certain musical styles appeal to me more than others. And some please me simply because I know they will please the most important people in my life - the Intrepid Junior Bloggers. So, when I heard the news of an upcoming concert at MacDonald Island a few weeks ago I knew the Juniors would be delighted, because it was a band they both like. It was a Canadian band that I like, too, a band that has risen to fame for good reason. It was a band that I am unashamed to admit I listen to often, singing along in my off-key kind of way. It was, of course, Hedley. 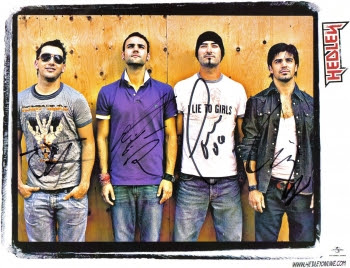 When I went home and told the Juniors about Hedley there was squealing. It was squealing of the high-pitched variety, the kind that hurts my ears but that I knew I better get used to because I would hear a lot of it both before, during, and after the concert. I took to Twitter quickly, and was delighted when Mac Island offered me a media pass to the concert. And that is when I decided to once again issue a personal request, but for a different reason. I decided to ask about the possibility of meeting Hedley, not for me but for my girls. And really it was because of the eldest Intrepid Junior Blogger.

You see, some of you know that the older Junior Blogger is not "mine". She is, as I have said on occasion, "a loaner", my niece who came to live with us for a year. And it has been a helluva year, people. She got to model in a fashion show. She got to meet Down With Webster. She got to work on a political campaign and attend the subsequent victory party when our efforts were rewarded with success. She got to attend events with me, she got to meet dozens of local people, she got to attend a brand new school (Ecole McTavish), she got to make fantastic new friends, she got to know her cousin (the younger Intrepid Junior Blogger) much better, and she got to make a family of three into a family of four. But it was just for a year, and, just days after the concert, she would leave us to go back home. She would no longer be my faithful sidekick for shopping adventures. She would go back to her life in another province, and she would be dearly, dearly missed by her friends, her uncle, her cousin - and especially, I think, by me, the person who stopped being her aunt for a year and became instead her "second mom" and friend. So, although I don't like to ask for things I asked if there was any chance my girls could meet Hedley - because this concert would be one of the last things my beloved elder Intrepid Junior Blogger would do in Fort McMurray. I wanted her final event here to be one she would remember forever, and I wanted to end her year with us in a way that showed her how much I love her. So, I sent in the request, and I waited.

In the meantime we got ready to see Hedley. Songs were downloaded and shared. Camera and cell phone batteries were charged. And, last Thursday night, we headed down to MacDonald Island, that place that is like a second home to me - and, to be honest, to the Junior Bloggers as they spend much time there too - and went to see Hedley. 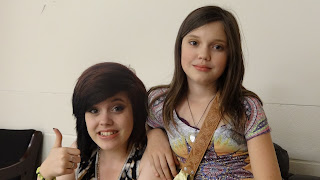 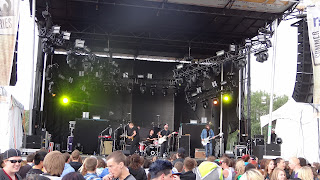 It was, as I would say to the Juniors later, a "kickass" show. Opening act "Acres of Lions" from Victoria warmed up the stage nicely, playing a great set that primed the crowd for "the boys". There was a nice mix in the crowd, lots of age groups and both genders well represented, but there was a definite skew towards young women, not a surprise given the attractive nature of the young men in Hedley. Excitement grew in the crowd until finally, at about 8:30, Hedley took the stage - and took the audience into the stratosphere. 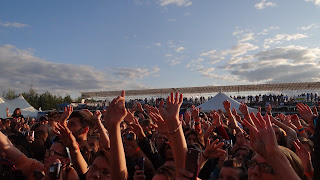 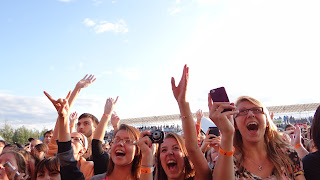 The Intrepid Juniors had abandoned me moments after we made it inside the gate (after me making them wait with the crowd in the line up, as while I probably could have snuck them in quicker using my media access I thought it important they understand what "general admission" means, even if it meant waiting out a rain shower while lined up). They took off to be with their friends as teenagers do, and I watched with amusement as they quickly secured spots right at the fence in front of the stage. 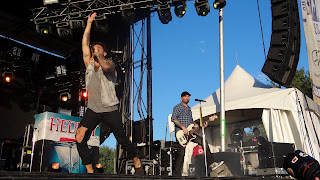 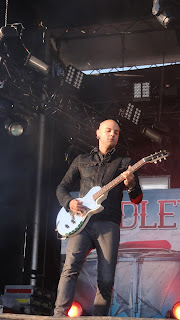 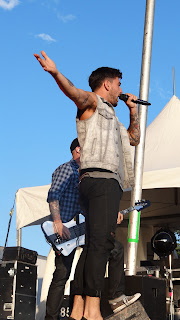 As media I was delighted to be in the "media pit" for the first three songs, able to snap photos up close of the band. And after that I wandered around for a bit, snapping photos of the stage, until meandering up to the VIP section to be with my own friends, and watch the rest of the show. 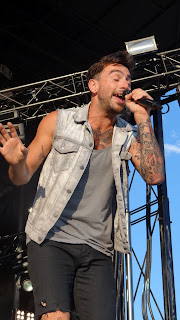 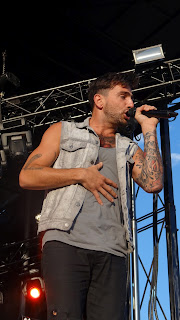 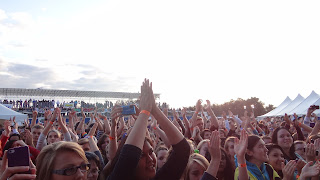 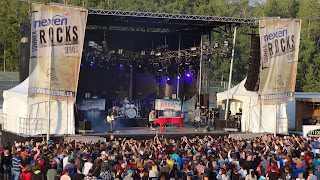 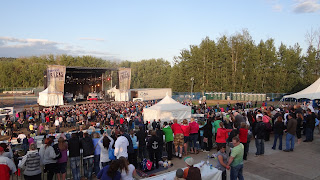 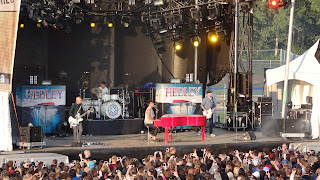 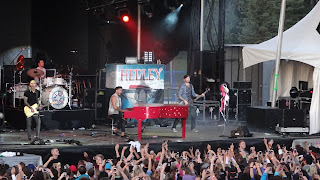 It was an incredible show, too, energetic and frenetic. I sang along with many of the songs, as the lyrics are catchy and easy to remember. Particular songs - "One Life", for instance, and "Perfect", simply roll off my tongue, while the song "Invincible" is deeply relevant to anyone who has ever experienced any level of personal change in their lives (something with which I am quite familiar, having gone from "stay at home mom" to "unpaid blogger" to "paid freelance writer" in a little over a year). I sang, I danced, I bought t-shirts for all three of us, and, at the end of the show, I met the Juniors and their friends.

We drove away from Mac Island with our windows open and the warm summer air pouring in, speakers blaring Hedley songs. We headed straight to Macdonald's and our traditional post-concert fast food and show analysis, discussing our favourite songs and moments. We talked about it all, guzzling down pop and eating french fries, laughing and talking and singing little bits of the songs we had just heard. And we talked about the best part, about the part they will never forget. We talked about how they got to meet Hedley.

Yes, that's right, people. Just before the show the Junior Bloggers and I got to meet Hedley, and we discovered four very sweet, very kind, and very funny young men. They signed my media pass, and they signed the Juniors' iPhone and iPod cases. They took photos with us, they joked with us (one accusing me of touching his bum, which I can assure you I did not, but which made my girls roar with laughter), and they gave my niece exactly what I had hoped for - one final memory of Fort McMurray that may fade over time but that will never disappear. It was the final jewel in a crown full of a year of memories for her, I think. I almost cried when she and my daughter had their photo taken with the band (but I didn't, knowing I would never be allowed to live that down). And when they walked out and towards the field, when I watched my girls bubble over with excitement over meeting Hedley and seeing the show and life in general I was so profoundly grateful. Grateful to MacDonald Island and the people there who not only bring in great entertainment but who made my niece's last event here so special. Grateful to people like the guys in Hedley, who had no idea what this meant to me or my niece, but who were simply good guys. And, in the end, grateful to this community that has given me - and by extension my niece - so much. 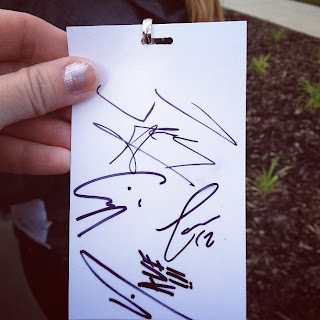 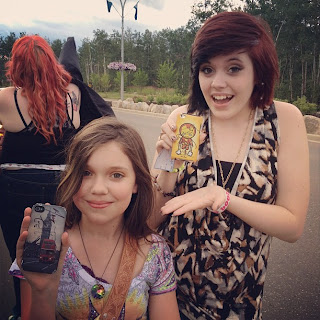 
My sincere thanks to
MacDonald Island Park
for all they do for the community -
and for me.

My profound thanks to
Jacob, Chris, Tommy, and Dave -
for being great guys
and making the dreams
of two young women come true.

And finally my deepest thanks to my niece -
whether I call her
Keila or Intrepid Junior Blogger
I love her as if she is my own,
and I always will.
Thanks for sharing a year of your life with us,
Cupcake :) 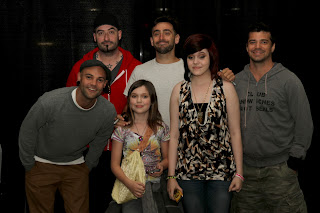 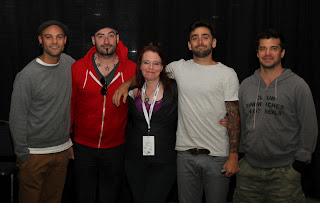