Sunday morning, July 1st, I woke with some trepidation. I was worried that the migraine headache that had surfaced the day before might have decided to stick around for another day of torment. I'd had a very good night's sleep, though, buoyed by warm thoughts of the meeting between my pal Nathaniel and K'Naan, and I was so relieved to awake and discover that I felt fine. Better than fine, actually, I felt quite brilliant, ready for a bright and sunshine-y day at Canada Rocks...and then I looked outside. It was grey. It was raining. The Canada Day Parade was in less than two hours and it looked like it would be a wet one, the Fort Mac skies atypically dark and stormy. I wasn't going to be at the parade, though. I was headed backstage for one final day, and so I pulled on some clothes and hopped into my car.

When I arrived backstage I discovered that the lovely Corinne from Mac Island had already done much of the cleaning from the night before. My job was looking even easier, and I was thinking it wouldn't take much to get the dressing rooms ready. We were expecting one band during the day, the Rebirth Brass Band, which I had heard much about but hadn't yet met, and then the country bands for the evening - Doc Walker, Corb Lund, and, of course, Blue Rodeo. The only problem was the rain, which continued to come down. And the problem was that there were performers scheduled all day, ones who needed to be in and out of the rain. And that is how backstage at Canada Rocks became a little Canadian multi-cultural fest, as EWB opened it up to the performers for the day. That's how the final day of Canada Rocks 2012 became one I will never forget.

First to arrive were the members of the Rebirth Brass Band, a group out of New Orleans. To call them charming would be the understatement of the year. After five minutes chatting with one of them I was entirely convinced to book a flight and hotel in New Orleans, and I had a list of bars to visit to hear great music. I'm pretty sure I even had ready-made tour guides, too, as these men were so friendly and eager to share with me the experience of the south, of the music it houses, and of the place called New Orleans, a place they cannot stand to be away from for too long, and ache to get back to every time they leave.

Things got a little crazier as the weather did, too. Soon there were dance groups filtering in, Asian dance groups and one from a local dance school. And a First Nations hoop dancer, one of international renown. And the children's group The Backyardigans. And the folks from the Canadian Legion, most of them seniors in search of a cup of coffee and a dry spot. By the time the stilt walkers dressed in baby clothing arrived I didn't even blink an eye. Backstage had taken on a carnival feel, with a distinct sense of Canadiana but with some New Orleans flair tossed in. I looked around at one point and realized it was truly the Canada Day melting pot, right backstage and right in front of me, with some international guests added to the mix. They came and went, some to perform if the weather held out for their performance time and some leaving due to rain-cancelled performances. The afternoon floated by in a haze of Legion flags, brass instruments, stilts, hoops, and entertainment.

As the daytime groups filtered out the evening performers began to filter in, and I was genuinely delighted to learn that these groups would be easy ones to work with indeed. I had learned at SummersEnd that country musicians and their camps tend to be easy to work with, and this held true with the folks from Doc Walker, Corb Lund, and Blue Rodeo. Humble, friendly, and undemanding they arrived, but with them came the usual sets of crises that arise at events such as these. One of Doc Walker's guitarists had lost his luggage, and with it his spare guitar strings. Megan from EWB called me, and I thought quickly - because even though it was Canada Day I just happen to know the owner of our only music store, Campbell's Music, and so I texted him immediately. And I knew what his response would be.

I texted Mike Allen, owner of Campbell's, and one of our newly elected MLA's, and told him of the dilemma. He asked only one question; what kind of strings? And so, at about the time Doc Walker was doing their meet and greet, Mike arrived with guitar strings, which he hand delivered to the band (while I explained to their road manager that not only did Mike deliver strings he is one of the most prominent leaders in our region). I was delighted by the response of the band, and their immediate belief that I could do anything (I was a bit terrified they would next request a pony, as I didn't know where I would find one of those but I was on a roll and reluctant to let them down).

I ran the meet and greets for Doc Walker and Corb Lund, delighted to introduce them to some local country music fans. The Doc Walker band is charming and friendly, and Corb Lund is one of those country gentlemen I so admire, like George Canyon, whom I had the pleasure to chauffeur at SummersEnd. And I was particularly delighted at the Corb Lund meet and greet when two very young local girls sang and played guitar for him, a moment that was deeply pleasing to all in attendance, I think. 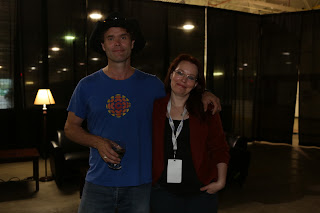 Me and Corb Lund, country gentleman 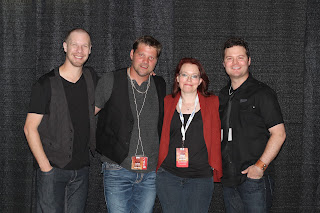 And then, finally, it was time for the Blue Rodeo meet and greet, and my chance for a few words with them. You see, I knew them many years ago, although they would not remember me. In their early days on the Toronto music scene they were getting famous while I was holding down bar stools at places like the Horseshoe Tavern and The Cameron House, and I saw them play small clubs more than once. We attended house parties together, and knew many people in common. So, when I went to get them for their meet and greet I spoke to Jim Cuddy, just as handsome now as ever, and told him about the times I was there when they played and partied. We laughed at how some of the people we knew in common are now Members of Parliament, and we talked about those old days - and then off he went to the meet and greet, with the entire band (initially it was just to be Jim meeting the public, so you can only imagine my delight when the entire band filed in behind him, and the meet and greet took on a party atmosphere). I had Jim sign my All-Access Pass, and then, after a few photos, the meet and greet was over. The band drifted back to their dressing room, the meet and greet attendees out the front doors of Mac Island - and I made a mad dash for the field, because I knew the performance I could not miss was about to begin. 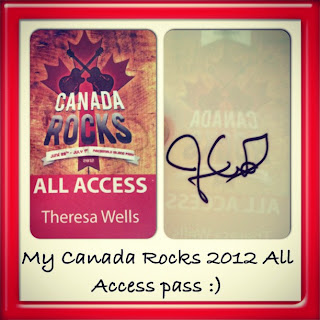 I caught a bit of Doc Walker and Corb Lund, but just fragments as I kept running backstage to attend to any needs. I admit, though - I abandoned backstage when Blue Rodeo took the stage, and I did not return there until they played their final encore song. I told the good folks from EWB that they could text me if they needed me - but I truly wanted to see Blue Rodeo perform, see them play from start to finish - and I did. I turned around at one point in the VIP section and was delighted to see that the guys from Doc Walker had joined the crowd too, and for a time we watched together. I spoke with some of the Mac Island staff I have come to know so well, and, in the end, I snuck away to an almost empty VIP box and I watched Blue Rodeo alone. I sang along with all the words to every song. There were a couple of moments when I admit I was close to tears, people. It was such a beautiful night, after all the rain that day. In the twilight the stars had begun to twinkle, and you could see them just above the stage. The field, muddy as it was, was full of people, many of them singing along - and dancing, too. There was laughter and smiles. I think it might just have been the best concert I've ever been to here, and I remember looking down from that quiet little VIP box and feeling great contentment.

I was so tired. My entire body ached from carrying cases of beer and running around in search of corkscrews. My jeans and boots were covered in thick mud. My car was running on fumes, and my house looked like a small tornado had touched down as over the past three days things had stayed where I dropped them when I staggered in the door. There was virtually no food in the house as I hadn't eaten there in days (and while I had enjoyed the food Mac Island provided I had survived mostly on coffee). And yet none of that mattered as I stood there in the northern twilight, listening to their final song, and singing along. All that mattered was that moment in time, me and the stars and Blue Rodeo. All that mattered, all that counted, was right in that moment. And it was, quite frankly, perfect. The final notes faded away into the darkness, and the crowd filtered out. I walked slowly down the stairs, headed backstage for one final check, and then off into the Fort McMurray night, once again in love with Blue Rodeo, the stars, and this northern community that has become so very, very close to my heart.


My profound and sincere thanks to
Events Wood Buffalo
and all their staff
for allowing me to be
part of Canada Rocks 2012.

My thanks also to
MacDonald Island Park
and all their staff
for once again being the heart
of this community.

My thanks to all the performers and crew
I had the pleasure to meet at
Canada Rocks 2012 -
but especially to
Doc Walker, Corb Lund, and Blue Rodeo.

And finally my thanks to you,
Fort McMurray -
for once again reminding me why
I love this place so very much :)
(and see you at interPLAY!) 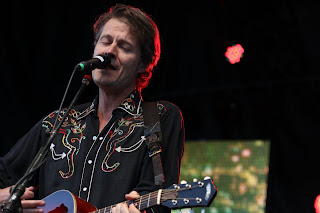 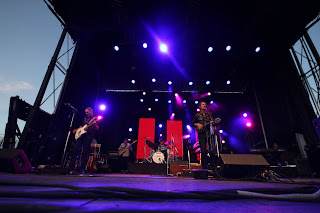