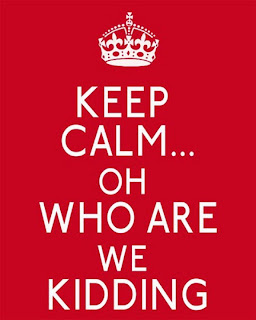 I've been following the wildfire situation in Alberta very closely these past few days. After the tragedy in Slave Lake I decided that it was very important, both as a writer and a resident, to keep up to date on the latest information, so I've been finding resources to do so. Twitter has been very helpful, as have some government sites. The social networking outlet I've been watching closest, though, is the Alberta Wildfire Info page on Facebook.

Sustainable Resources Development should be commended on their use of social media at this time of crisis. They are doing a remarkable job of keeping Albertans informed on the wildfire situation, and I've actually sent them an email thanking them and suggesting the staff manning that Facebook page and the Twitter account get a raise, because they are doing excellent work.

My one concern, though, has been that I sense a rising degree of panic in Albertans, if the Wildfire Info Facebook page is any indication. Now, residents of Slave Lake get a free pass as far as I'm concerned. They can be anything they want, including hysterical, because they have seen hell on earth and have been traumatized. I'd be hysterical, too. Same goes for evacuees of other areas - they have a right to panic. For all other Albertans, though, I have one bit of advice - keep calm, and carry on. Prepare for the worst, hope for the best - and keep on going.

The slogan "Keep Calm and Carry On" was developed by the English during WWII. It was designed to boost morale and to encourage the English to remain calm and to not panic, even when the situation was dire, such as an invasion. It was never used during that era as England was (thankfully) never invaded, but I think the slogan has a powerful message.

Panic has no value. None. When we panic we lose our ability to think, to plan, and to act. We run on pure instinct and while this can seem wise it can also lead to poor decisions. We need to remain calm, exercise common sense, and work together.

Panic can also lead to the spread of misinformation, which can have devastating results. If people listen to rumours or unofficial sources of information they can easily be misled into believing things that can in fact do great harm. These rumours can further fuel panic and quickly become a self-reinforcing spiral. Albertan residents would do well to only trust information from official sources and to view all other information with caution until it is proven (we should always do this, really, but especially at times like this).

I must admit I worry a bit about some of the reactions I've been seeing. I am so proud of all those Albertans who are organizing fundraisers and donation drives for the Slave Lake residents. I am so proud of the citizens of this province who are pulling together in this time of crisis. Clearly those reactions don't worry me. The people who are beginning to show signs of panic, though, do concern me. I suspect most aren't in imminent danger, and panicking at such an early stage in the game won't serve them well over the long run. This summer has just begun, and we may see a hot and dry one with many wildfires. If that is the case we need to find a way to avoid panic, keep calm, and carry on - or it will be one long, crazy summer.
at May 19, 2011