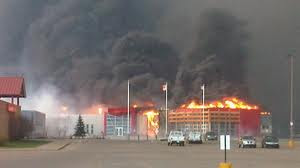 I am fairly new to Twitter, having opened an account only for the purposes of staying informed for this blog. Last night I saw the full effect of the world of tweets when Twitter went crazy with news of the Slave Lake fire. I followed it closely, updating non-tweeting friends with what I had learned from Twitter, and thinking about how what was happening in Slave Lake could happen here right in good ol' Fort Mac.

Prior to living here I lived in northwestern Ontario, another area where forest fires are a yearly occurrence. Every year the smoke would roll in and you would hope this one wasn't the one that caused the massive evacuation, or, even worse, cut off the one highway out of town. That had happened in the past and an air evacuation followed, with people leaving behind their homes and cars and, worst of all, their pets as they could not be accommodated on the flights. I feared this so much that I had made arrangements with a pilot friend to fly my dog to safety if an air evacuation was ever ordered.

Last night as I watched with horror as Slave Lake burned I realized how complacent I have become. Living in Fort Mac has made me believe that a forest fire could never pose a real threat here. After all, the big companies would never allow that to happen, and would never allow their plants to burn. We are a fairly large city, and large cities don't burn down, right? (forget that whole London and San Francisco fire thing, that was a long time ago!) I realized that the true danger and enemy might not be forest fires at all, but complacency.

I sat there and read the tweets and saw the photos. I thought about my vehicle sitting outside my house with a 1/4 tank of gas because I had procrastinated, thinking I could fill it up tomorrow. I thought about the emergency preparedness kit that I don't have, and the list of things to take in case of evacuation that I've never made. I realized that if I was suddenly told to evacuate I would have no idea where to begin. In a forest fire situation all the gas stations would close, of course. With 1/4 tank of gas how far would I get? How many crucial items would I forget in a panic because I didn't have a checklist?

I think there is a very real tendency in this city to assume that forest fires happen elsewhere, could never breach city limits, and will never threaten our homes and our very lives. Slave Lake was a wake-up call, people. If it could happen there it could happen here, and we need to be vigilant. I'm sure the Japanese never, ever believed that there would be an earthquake that could bring the nation to it's knees, and yet we all know what happened there. Nature doesn't make allowances for powerful nations or big cities or oil companies or people who have lived life in a complacent daze. It happens whether you want it to or not, and whether you are ready or not. So, let's be ready, shall we?

Canadian Red Cross - accepting donations for those affected by the Slave Lake fire. My thoughts are with all those Slave Lake residents who have lost so much more than seems possible. My heart breaks for them, and I so desperately wish that my wake-up call hadn't come at their personal cost.
at May 16, 2011