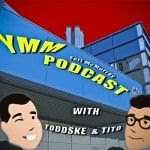 Around the same time that I began to set up this blog I discovered that some local guys were also venturing into cyberspace to discuss our home city, although they were doing so through podcasting. I am a writer at heart but was intrigued so as soon as I could I checked out the first episode of YMM Podcast - and these podcasts are totally worth an hour of my time, and of yours too, I think.

What impressed me the most I suppose is that this podcast originates with a couple of guys who I suspect are in their twenties. Now, I'm not going to tell you what I was doing in my twenties, but what I wasn't doing was caring at all about the city I lived in. I happened to be living in one of Canada's largest cities at that time and while I loved living there I never gave it a lot of thought. I was pretty self-absorbed and being concerned about civic matters never even occurred to me. So the fact that these two guys care enough about Fort McMurray to actually run a regular podcast? Very, very cool, in my opinion, and a sign of hope for this city, too.

I will warn that the language and subject matter can be a bit explicit - again, it's a couple of guys in their twenties. There is a raw honesty to their discussions, though. It's like eavesdropping on a conversation between a couple of locals, and I love hearing how people in their generation view this city, because their experience is bound to be different from my own.

Now, I don't always agree with them on every topic, but again that's the beauty of the whole thing. The joy of the internet is that it's the great leveller. The opinions of a podcaster and a blogger are on equal footing, and there is room enough for all of us on that great big web.

The latest episode, Episode 6, was particularly enjoyable as they had a couple of guests, two young women, who brought yet another perspective to the table. The topics ranged from the current controversy over Dunvegan Gardens (more on that in a future post) to midwifery to the federal election. It's a wide ranging discussion for sure, and what's lovely is one of them will head off on a tangent for a bit and then another will gradually rein them in and back onto topic (or another topic entirely, which makes for fascinating segue bits). These guys aren't professional radio jocks or broadcasters, and that's why I think I enjoy it so much - because there is that genuine sincerity in their attempt to bring their thoughts on the city to the listening public.

I have to admit listening to them has given me much fodder for future posts, too - the concept of young people growing up here who achieve career and financial success very early and thus "peak" too soon is a fascinating topic I hope to explore as I think there's a great deal of truth to it. Again that's the beauty of this all - we share a common goal in bringing our thoughts on our home city to the reading and listening world, and we can springboard off each other's ideas as we do so. We can reach people through the written and spoken word, and we can share our experience of Fort McMurray and the people who live here. So, people, give YMM Podcast a listen. You can find them on iTunes and on Stitcher (which I wasn't even aware of until they mentioned it, and now I'm loving it!). You can also find them at their site, of course, and on Facebook. Check it out - you won't regret it!
at April 27, 2011